Are politics a missed merchandising opportunity? 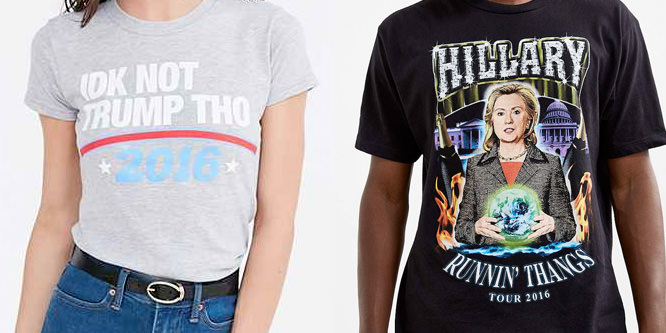 With the 2016 presidential election captivating America, Urban Outfitters is benefiting from the sale of a wide range of merchandise bashing the Republican candidate, Donald Trump.

One item that continues to sell out has been a t-shirt bearing the phrase, “IDK NOT TRUMP THO.” Translating to “I don’t know, not Trump though,” the slogan went viral when a Los Angeles comedian posted it on social media.  Urban Outfitters exclusively licensed the phrase. Other Trump items include a “Trump 20Never” pin, anti-Trump mugs and a book of Trump quotations mimicking Mao Zedong’s Little Red Book.

Urban Outfitters’ t-shirts sometimes draw controversy but are largely irreverent, even when focused on politics. In advance of the 2012 elections, t-shirts bore a “2 Legit 2 Mitt” logo featuring a dancing Mr. Romney. Some saw risks in this year’s negative approach.

“It is unusual for a company to step so boldly into politics, particularly in a campaign as polarizing as this one,” Allen Adamson, founder of Brand Simple Consulting, told Bloomberg.

The anti-Republican slant also runs counter to the leanings of CEO Richard Hayne, who has a history of contributing to Republican campaigns.

But the anti-Trump message appears to resonate with Urban Outfitters’ younger customers. Melissa Arnoff, SVP at communications firm Levick, told Fortune that the chain “is known for hitting on what is trendy, and it is trendy right now to really not like Donald Trump.”

In a statement released to the media, Urban Outfitters said it “does not take positions in electoral politics” and its product choices are “largely driven by the demand of our customers and artistic partnerships.”

Not many other majors are merchandising around the election. Amazon is offering a wide range of t-shirts that are largely favorable to each candidate, although a few are negative, such as a “Lock Her Up” item for Mrs. Clinton.

DISCUSSION QUESTIONS: Should political themes be a bigger merchandise opportunity for retail? What do you think of the approach taken by Urban Outfitters?

Please practice The RetailWire Golden Rule when submitting your comments.
Braintrust
"If you play in that arena, you should be prepared for the backfire, or at least some ugly markdowns. "

10 Comments on "Are politics a missed merchandising opportunity?"

Retailers should shy away from political merchandise. Why potentially upset some consumers?

Branding is everything and the blending of branding is a slippery slope. Retailers have always had to exercise discretion in what they offer, because every offering has either a positive or negative impact on the brand. Advertisers understand it and are compelled to not disparage others in their messaging. Products that do this can only hurt the retail brand at least part of the time.

I have a very limited Facebook following. Basically family and close friends. I posted something political recently and not one of them “liked” or commented or anything on that post — very unusual for them. The point is, no one wants to show their cards for fear of some sort of weird retribution from someone else. It’s a volatile campaign. So, generally speaking, Max is right. If you play in that arena, you should be prepared for the backfire, or at least some ugly markdowns.

Having said that, all the examples I’ve seen so far are just plain funny and/or irreverent. Which really plays with their customer, obviously, as they’re flying out the door. Of course, they’re funny to me, and therein lies the rub to others.

If, like Urban Outfitters, your brand is (at least in your own mind) based on irreverence and hipster sensibilities the political stuff is OK. At the very least it — well look what we are doing — generates free publicity. I was in Dulles Airport this weekend where shops were selling both pro-Hillary and “Make American Great Again” hats, etc. Again, fine — balanced, positive and on-brand (Washington, D.C. resonant). But I wouldn’t suggest that Nordstrom break with a “Lock Her Up” line by Hermes or that Joe’s IGA in Big Elk, Montana start offering “Green (Party) is Good” sustainable shopping bags in their produce aisles. Max is right, better for most retailers to sit this “opportunity” out — especially this political season.

As we consultants like to say, “It all depends.” It depends on the brand. If you are all about being hip, irreverent, etc. then go for it but play it equally. Don’t lean too much on one side or it just might bite you.

For “mainstream” retailers this is always a great way to cause a stir among shoppers, if you have too large of a promotion/display of this stuff. A few shirts offered under the radar is fine. Edgy retailers can do this all day long. However, it’s a risk that may not have that much of an upside potential.

“Captivating”? Try “terrifying” or “nauseating.” Believe it or not, not every happening is an “opportunity” for retail; politics is polarizing by definition, so even under the best of circumstances, a business must balance appealing to supporters against alienating opponents … this election is probably the worst of circumstances.

Although a brand effectively choosing a side may seem counterintuitive, Millennials buy from a brand with a message. They vote with their dollar. They know this. Whether a brand takes an overt political stance or not, the customer is aware of the political leanings of the brands they purchase.

It was a great move for Urban Outfitters to promote Anti-Trump apparel (albeit falsely marketing their CSR), because they are marketing to their target audience while linking themselves to a cause.

Brand transparency and identification are the future. A relationship is created when a retailer’s morals are in accordance with customer beliefs.

Whether political themes should be a bigger part of a retailer’s merchandise depends upon the desired image of the retailer and their consumers. Politics is often polarizing so connecting a political position, party, or candidate with a retailer’s brand needs to be decided with care. As Ryan suggested, associating with groups that have political positions that help extend brand image and resonate with consumers could be a good choice.

Appearing to endorse one side of any divisive issue creates risk. This intensifies as the emotion around the issue increases.

However, there are local situations where it may make sense to take a political stand. For example, if you own a retail business in a highly competitive and fragmented market that has a bias toward one side or the other.

For example, endorsing a liberal in Vermont or a conservative in North Carolina may alienate a quarter of your prospects. But it resonates with the majority.

Sales and loyalty are driven by matching values with your customers. Understand your best prospects and know how to engage them; even if it’s political.

Braintrust
"If you play in that arena, you should be prepared for the backfire, or at least some ugly markdowns. "