Can an Instagram-born luggage brand have staying power? 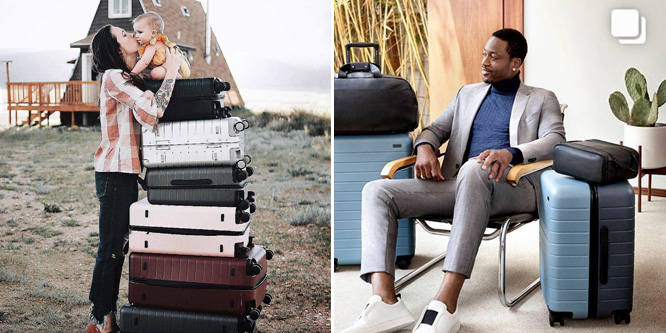 Founded in February 2016, Away has sold more than 500,000 suitcases to date, achieved profitability within two years and raised $81 million in two funding rounds. The luggage brand’s quick success is being largely attributed to Instagram.

The brand has established a roving tribe of traveling Instagrammers that earn free luggage and other items for their posts. The co-founders admit to capitalizing on Millennials’ zest for experiences and the status symbol afforded from posting while traveling.

In an interview with Eater, Jen Rubio, co-founder, president and chief brand officer, said, “A few years ago, if you had said that people would be taking photos outside of airports, or with their suitcases, that would’ve been really weird. We launched, kind of at the time when that was starting to happen, and part of it was people were traveling a lot more, millennials are traveling a lot more, and we were the bag that they wanted in those photos.”

Away’s $225 minimal, hard-shell carry-on suitcase with phone-charging capabilities fills a niche between flimsy suitcases under $100 and luxury bags that fetch prices near $1,000.

What sets Away apart is the brand’s emphasis on storytelling that taps into the romanticism and sophistication of travel. In addition to Instagram posts, travel content includes a quarterly magazine and podcast. Ms. Rubio said in a press release on a new round of funding in June, “Away launched with the underlying belief that we can change the way people travel by inspiring people to do it more, and by making it even easier.”

The funding will support the opening of six stores by the end of 2018 in addition to the brand’s current New York, Los Angeles, San Francisco and Austin locations, a move into bigger headquarters, product extensions and social media investments.

Longer term, Away sees itself as a lifestyle travel brand with opportunities to expand into apparel, skincare and even possibly hotels and airlines. Extensions already include carryalls, backpacks, toiletry bags and garment bags. Steph Korey, co-founder and CEO, told Adweek, “Our goal is to create the one perfect version of everything people need to travel more seamlessly.”

DISCUSSION QUESTIONS: What do you think is the biggest factor behind Away’s quick success and take on luggage selling? What will the company need to do to reach its next level of growth?

Please practice The RetailWire Golden Rule when submitting your comments.
Braintrust
"This is a genius idea that complements Millennials’ desire to travel and to share photos of their trips."

"Away identified a void in the luggage marketplace and created a modern day go-to-market strategy that tapped into all things Millennials love."

"Away found their customers. They know who they are, what they like and what motivates them."

16 Comments on "Can an Instagram-born luggage brand have staying power?"

This is a genius idea that complements Millennials’ desire to travel and to share photos of their trips. Away products are expensive, but that’s probably part of the mystique. Luggage as lifestyle — who would have seen it coming?

I have an Away bag that I use constantly for business travel and I’m getting ready to order the next size up for longer trips. There is just something about the quality, the lightness and design of the bag that works for me though I can’t say that my Away bag has found its way into my Instagram feed yet! As far as the company itself, I was so impressed by how Away jumped into action to develop, and deliver, a solution for quickly (ish) removing the bag’s battery pack — one of its highly-touted, unique features. Various airlines were rejecting the bags with the batteries inside, requiring travelers to go through painstaking steps to remove them. Away even offered the option of sending the bags back for them to install the solution. I thought the regulatory crack-down would break the company. They kept chugging and took full ownership. An impressive case study all around. If Away is half as determined to expand as they have been to remove obstacles, I wouldn’t bet against them.
6
|
0
-   Share

Everyone loves a good story, and it’s clear that the Away team have seamlessly tied together the wonderful experience of traveling with their branding and powerful imaging via Instagram. The company also has done an impressive job of organically growing their Instagram followers, tying together some influencers such as Dwayne Wade yet keeping price out of the conversation, as it’s all about the experience of traveling, not the cost of their suitcases.

Away, along with Warby Parker, Bonobos, and other Instagram fueled digital natives, have found the secret sauce of building a following and a community via Instagram. The keys for Away’s long-term success is to continue to drive the storytelling and experiential retail experiences in their showrooms, as well as explore a bit more product diversification. Especially as consumers don’t have to buy luggage that often.

We have Away cases. They were not cheap but they are very functional, extremely durable and easy to use. The carry-on ones were tested on every type of plane to ensure they fit into the overhead bins – this sometimes leads to arguments (here’s looking at you, American Airlines) as to whether something will fit in the overhead space on the smaller aircraft.

It is this attention to detail and the fact they have been designed to solve travel problems that drove our purchase. We first discovered them through social media and got all the information from their website.

Not everyone is going to buy Away and there is a limit to how much luggage any one household needs. That’s why they are branching into adjacent categories like travel organizers and smaller bags. They might also follow the Nomatic route and branch into gear like watches and wallets.

Away identified a void in the luggage marketplace and created a modern day go-to-market strategy that tapped into all things Millennials love. Additionally offering free items to the consumer via Instagram is ideal as your messaging is being distributed directly to your target market by your target market, not a digital ad or commercial.

If a luggage brand is born via Instagram, it’s likely born of the “people who travel” which is the most credible source ever! All the company needs to do in its evolution to a lifestyle travel brand is to keep the travel tribe at the center of the brand! Brilliance will certainly emerge.

More evidence that good storytelling sells — as long as the products live up to expectations. It appears that Away has hit on a magic formula of good storytelling that taps into shoppers’ aspirations (always a bonus!) supported by good products priced right.

I’d say, perhaps counterintuitively, that it is product quality. Look at this RetailWire discussion. Several Away customers talking about how well their luggage performs. Now imagine what would happen to a social media-dependent brand if all of its users were unhappy with the product’s quality. So performance is table stakes. Then comes the great story, told by people who are the target market. It’s an effective one-two punch. As to what they need to do to get to the next level of growth? My advice would be to invent the world’s best computer bag — I mean who loves their computer bag? — and to go slowly, growing organically rather than getting ahead of the market and hoping it will catch up.

Nomatic have done a pretty good job with laptop bags and other smaller luggage:

Rakuten Intelligence published a report on Away back in August that found sales revenue for the brand grew 198.4 percent year-over-year, compared to 36.8 percent growth for all online luggage.

Away found their customers. They know who they are, what they like and what motivates them. They incorporated this into their marketing strategy, which includes Instagram and other social media channels. It was preparation meeting opportunity – and some very smart people managing the company.

Away capitalized on a clever product, and utilized Instagram as a channel where it could target the young and traveling demographic. Combine that with their growing physical portfolio (outside of airports liken ORD), and hopefully a more broad product offering; there’s no reason they can’t have staying power.

Using the tool (Instagram), a style (storytelling), and a product (suitcase with a phone charger) certainly appeals to Millennials. Encouraging consumers to post photos with their luggage on Instagram reinforces the use and appeal on Instagram. This is an approach that anyone attempting to appeal to Millennials should investigate. Different approaches to marketing is necessary for different segments of the population. However, remember that the story needs to appeal to the group.

Let me start by saying I have no idea if Away luggage is any better than other brands we business travelers regularly use. What I find near genius is using Instagram as the strong marketing tool. The old saying used to be “build it and they will come.” The newer saying might be “build it, market your story to Millennials and they will come.”

This is a great example of the power of social media. Away married three things that Millennials are passionate about: Instagram, travel and functional luggage. As a person that travels quite a bit, I am very particular about my luggage (size, functionality and quality), so I can see how people can be swayed by Instagram advocates of Away luggage.

For continued growth, opening more stores is a great start. However, they will need to expand their advertising to other platforms that appeal to people that aren’t Instagram users and followers. Another logical step is to expand its distribution to department stores.

This is called, “Be where your audience is.” Not complicated.

Braintrust
"This is a genius idea that complements Millennials’ desire to travel and to share photos of their trips."

"Away identified a void in the luggage marketplace and created a modern day go-to-market strategy that tapped into all things Millennials love."

"Away found their customers. They know who they are, what they like and what motivates them."