Can Fred’s thrive as a national competitor? 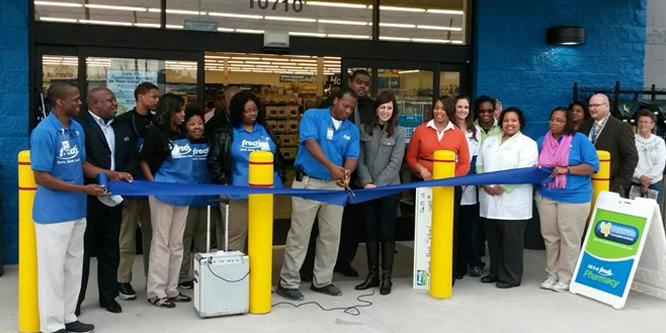 In a surprise, Fred’s Inc., the Tennessee-based operator of general merchandise stores and pharmacies, stepped in to acquire 865 Rite Aid stores.

Plans for the sale, which is expected to commence on the completion of the $9.4 billion mega-merger between Walgreen’s and Rite aid, should help the parties move through the regulatory process.

For Fred’s, the deal will more than double its store count to make it the third-largest drugstore chain in the U.S. Fred’s has 647 discount general merchandise stores and three specialty pharmacy-only locations in 15 southeastern states. On Tuesday, shares of Fred’s vaulted $9.04, or 81.8 percent, to $20.19, in over-the-counter trading on the news.

“This will be a transformative event for Fred’s Pharmacy that will accelerate our healthcare growth strategy,” said Fred’s Pharmacy CEO Michael Bloom in a statement. “We believe that this transaction will also create tremendous opportunities for both our new and existing front of store and pharmacy team members.”

Fred’s has largely overhauled its management team over the last two years, including bringing in several hires from Walgreen’s and CVS. Mr. Bloom joined Fred’s last year as COO and president, the same titles he held at Family Dollar Stores. He was promoted to CEO in August.

“We believe the purchase of these stores will not only complement recent investments in our team members, processes, and technological infrastructure, but also positively impact our business and maximize shareholder value,” said Mr. Bloom.

Fred’s paid only $950 million in cash for the locations and the acquired stores are expected to be accretive to earnings and generate substantial cash flow. Fred’s may also acquire additional locations to support the merger of Walgreen’s and Rite Aid. Rite Aid has 4,600 stores in total.

DISCUSSION QUESTIONS: Does Fred’s stand a better chance than Rite Aid to remain competitive against Walgreen’s and CVS on a national scale? How should Fred’s position itself in the competitive marketplace?

Please practice The RetailWire Golden Rule when submitting your comments.
Braintrust
"If Fred’s has been successful in Tennessee against Walgreens and CVS, it stands a chance to do well on a national level. "

"I can tell you it is a steep hill to climb. As Mike Tyson said, “Everyone has a plan until they get punched in the mouth.”"

"These stores fell into Fred’s lap as a gift from the FTC."

9 Comments on "Can Fred’s thrive as a national competitor?"

If Fred’s has been successful in Tennessee against Walgreens and CVS, it stands a chance to do well on a national level. However growing this quickly puts a strain on the culture while creating new logistics challenges. Not all companies are able to grow successfully. Growing successfully as such a fast pace creates an additional challenge.

Fred’s has been more regional than national and may find it very difficult to play with the big boys. If they can change their image to be more of the hometown pharmacy maybe they can compete, but I do not think so. No offense to the company but the name “Fred’s” does not bring a warm caring and kind vibe to me. But then again a company named Walgreens did it and so did Consumer Value Stores (CVS’ original name). It is going to be a rough road for Fred’s.

I’m not sure what Fred’s brings to the game that’s any different from Walgreens and CVS. Rite-Aid, as a third wheel, seemed to flounder, at least here in Atlanta, but then their stores are decidedly down-scale.

That’s a lot of growth to bite off at once, so I’d worry about cultural and organizational problems before I even thought about a competitive market position. Of course, it may be that management is positioning itself for a liquidity event, i.e., get just big enough to worry one or both of the big boys and then sell out to them. I don’t know enough about Fred’s to make insightful observations, but I do know that with markets tending toward oligopoly it becomes increasingly harder to differentiate at scale. It’s easy to compete on your own terms when you are small and a lot tougher to maintain a clear point of differentiation when you are reacting to giants. The temptation to do what the big kids do often exceeds the ability to actually effectively compete.

Having been a part of a management team with 200 hundred sites in well-established markets that purchased 700 in non-congruent markets, I can tell you it is a steep hill to climb. You can do many things in preparation, but once the reality hits you find you may not be as prepared as you thought. As Mike Tyson said, “Everyone has a plan until they get punched in the mouth.”

It is difficult for a large national chain to add this number of new locations in one bite. I do not know if Fred’s has the infrastructure in place to handle it successfully. There will be some problems with this. Can they be successful? I can’t answer that.

These stores fell into Fred’s lap as a gift from the FTC. When have you ever seen the ACQUIRING company’s stock double on the news that they were buying another company — particularly one that is effectively four times their current size?

On the other hand, Fred’s is uniquely positioned as the “Dollar Drug Store” in their current markets. The “decidedly down-scale” Rite-Aid store locations Steven Needel mentions might be a perfect fit for Fred’s approach.

Perhaps the market thinks Mike Bloom can make this work. He may have learned a trick or two about this game while at Family Dollar. And he certainly knows CVS.

While I wish them well, acquiring stores from the weak link in the CVS/Walgreens/Rite Aid pas de trois — and you can bet they aren’t going to be the best ones — doesn’t seem like a recipe for success, particularly as they will be going up against what will now essentially be a duopoly. (It strikes me as the equivalent of agreeing to double-date with someone’s homely cousin in exchange for favors.)

But maybe they can find some magic, or play the “down home” local angle — 1500+ locations, notwithstanding. And regardless, may they and all the RW participants enjoy Happy Holidays!

Reminds me of when Albertsons sold stores to Haggens. Never sell stores off to a good competitor. Even if you have to give them away.

Braintrust
"If Fred’s has been successful in Tennessee against Walgreens and CVS, it stands a chance to do well on a national level. "

"I can tell you it is a steep hill to climb. As Mike Tyson said, “Everyone has a plan until they get punched in the mouth.”"

"These stores fell into Fred’s lap as a gift from the FTC."