Can grocers digest their way to zero waste? 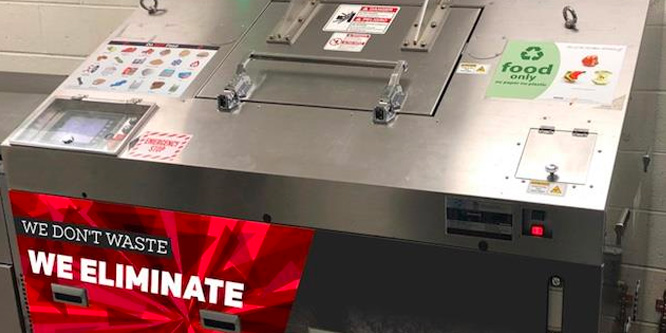 A growing number of grocery stores are using anaerobic digester technology in their operations to minimize the amount of their food waste ends up in landfills.

A recent order placed by a regional grocery chain in New York for six food digesters capable of breaking down 800 pounds of organic material per day, as reported by Waste Today, is one recent instance of the recycling method being implemented.

Numerous vendors offer digester machines, which grind up, heat and chemically break down discarded food waste into a combination of water and an environmentally neutral compost. Some anaerobic digesters also capture the gas released from the food waste digestion process and use it to generate electricity to help power the operation.

As larger grocery chains have upped their focus on sustainability, some have adopted digester technology in select locations.

Last year, Kroger added a $9.5 million anaerobic digester at its K.B. Specialty Foods manufacturing plant, according to a separate article from Waste Today. The plant makes deli salads, cake icing and other packaged goods sold at Kroger locations. This is the second anaerobic digester the chain has rolled out as part of its sustainability initiatives under the Restock Kroger program. The first has been in place since 2013 at a Ralphs-Food 4 Less distribution center in California.

Stop & Shop in Freetown, MA opened its own 1.2 million-gallon anaerobic digester facility in 2016 in response to a state law banning the placing of organic material in landfills, according to a Belmont Journal report on YouTube. Food products that are not purchased in stores and pass their expiration date are shipped back to the anaerobic digester facility to be processed. The facility processes 95 tons of organic material per week.

In pursuit of creating zero waste, some stores have also worked to make an impact on the packaging end by cutting down on the sale of vegetables, fruits and other products that come pre-packed in plastic. Others have gone as far as to sell fruit completely loose with no store-supplied bag or offer perishables in compostable containers.

DISCUSSION QUESTIONS: Does anaerobic digester technology show promise as a realistic solution to retailers’ food waste challenges? What problems might prevent this or similar solutions from being adopted at scale?

Please practice The RetailWire Golden Rule when submitting your comments.
Braintrust
"It should be combined with better supply chain management on the front end. "

6 Comments on "Can grocers digest their way to zero waste?"

It’s good to see a few grocers taking responsibility for minimizing waste and carbon footprint. The upfront capital investment may seem intimidating, but I’m very curious to better understand the impact this will have on the behavior of shoppers (who are increasingly voting with their wallets in favor of more sustainable options) as well as on long-term cost structure.

Investing in disposal equipment as a result of a new law is only part of the solution. I feel a lot of food waste can be cut down by increasing overall efficiency – improved forecasting, category management, more efficient supply chain, improved use of predictive analytics to support these processes and the elimination of data silos that constrain these processes can all help. You can save money and the planet at the same time – I had a piece published about this earlier this week.

I’m curious about the total landed costs of this process versus traditional dumping. This is definitely great for goodwill impressions of the companies, though.

Anaerobic digester technology is a great concept to help reduce a retailer’s food waste. However, what it is doing is addressing the issue on the back end. It should be combined with better supply chain management on the front end. As predictive sales technology continues to improve hopefully there will be less organic waste that needs to be addressed.

Where’s that “Like” button when you need it? Fascinating video of the Stop & Shop facility. This process makes total sense for retailers and their suppliers. I also expect third-party companies, perhaps from the logistics or waste management sectors to quickly get involved with this technology. The only downside is scale and capital investment requirements but those should be quickly addressed.

While I’m certainly not opposed to these kind of efforts, if I were a shareholder (disclosure: I am) my main concern would be that they were cost effective. To me, at least, a phrase like “pursuing zero waste” sounds more like a fad picked up at some conference than a well thought-out operational plan.

Braintrust
"It should be combined with better supply chain management on the front end. "