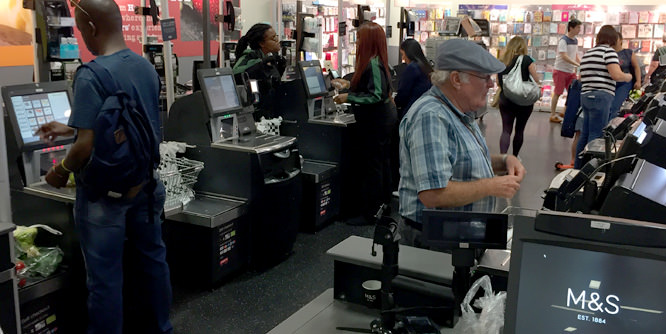 Researchers from Queensland University of Technology (QUT) in Australia believe theft is high at self-checkouts partly because shoppers feel less guilty about stealing from a machine than a human being.

At self-checkout terminals, thefts often involve leaving out a few items when scanning. Offenders also commonly punch in a lower price-per-pound item when scanning produce. A U.K. study from 2016 found one-third of customers regularly steal through self-checkouts with fruits, vegetables, breads and confectionary being the most commonly stolen items.

One way to reduce theft, according to Queensland University of Technology researchers, is adding more staff to monitor self-checkouts to increase the perceived risk of being caught. Another is outright prosecution warnings near the checkouts.

But the researchers also said subtler ways can reduce the “deviance threshold” or the point at which people do things they know are wrong.

Speaking to Australia’s news.com.au, lead researcher Paula Dootson said, “This is about changing the behavior of people that steal just a little bit because that’s actually worse for the supermarkets than the few people that steal a lot.”

DISCUSSION QUESTIONS: What do you think of potential tactics to humanize self-service checkouts in order to reduce theft? Which of the options offered in the article makes the most sense to you?

Please practice The RetailWire Golden Rule when submitting your comments.
Braintrust
"I think the 'extreme personalization' coupled with an obvious camera would be the ideal combination."

"As a past store manager, the more human interaction your staff can provide, the less theft you’ll have, in general."

"If theft were such a concern at self checkouts, we would see fewer of them. So I am not so sure it is such a problem. "

Personalization is the best option along with courteous pop-up messages on the screen. Customers like to be acknowledged so features like greeting them with their name in the display and thanking them are positive and should make them think the company is watching them. That should reduce theft. Plus, it is a step up for customer service. However, the problem with so many stores is that the self-checkouts have lost their main benefit — convenience. Retailers in another attempt to save money thought that by putting in these machines would successfully reduce payroll. Instead, they have frustrated customers when the scanners are overcrowded, are not working, get jammed and have issues with not properly scanning an item or coupon.

Retailers need to re-evaluate their self-checkout system in their stores, see if it is right for them and how they can improve it. However with technology I do not see self-checkout being around long once we perfect mobile payments and mobile scanners.

Humanization definitely triggers moral correctness … when people feel that they are being watched, they are accountable. So I think the “extreme personalization” coupled with an obvious camera would be the ideal combination. It signals: “We know who you are” and “We are recording your behavior.” In terms of push-back, I think people are so accustomed to cameras that they wouldn’t flinch.

Subtlety goes a long way. Adding messages that reach the customer on an emotional level — charities, thank yous, random informational trivia, etc. will impact a percentage of shoppers. Don’t expect too much correction! Shoppers who go through the process to cheat the honor system are not likely to be swayed by a message on a computer screen. As the technology matures and new processes are introduced — RFID tagging, global pass-through checkout (Amazon Go), etc., many of today’s issues will be eliminated. Those shoppers that are driven to cheat the system will always discover and invent new ways.

Let’s start with the idea that SCO is fine for a few items, but a customer who has $150 worth of groceries (and potentially a toddler) in her cart just doesn’t want to determine what the right secret code for endive is. No amount of “personalization” is going to persuade her that it’s in her interest to make her do the work at checkout. I understand the point of the study, but would suggest that the best way to prevent theft at checkout is to have a human eyeballing the cart and ringing items.

Cathy, I agree with you and Frank Riso’s point that if it were so costly, SCO would be pulled or monitored closely.

There are three types of shoppers: those honest to a fault, those intent on stealing, and the majority in the middle as you described. Addressing the middle is a functional problem the store has to resolve with a better focus on UX throughout every aspect of shopping. Shoplifters are not easily deterred.

So simple personalization (and I don’t think determined shoplifters will swipe a card) and greetings won’t mean much. A morality message might just tick off an honest shopper (like me).

Humanizing self-checkout might help incrementally. But for people who steal for financial reasons or those who just want to see what they can get away with, I doubt a friendlier greeting on the screen will make a difference. As for outright telling customers that a “wide majority of customers buying red onions ‘actually swiped them as red ones, not the cheaper brown onions,’” wouldn’t that just put ideas in people’s heads? If only one-third of shoppers were already thinking of scanning the cheaper onions, why even let the other two-thirds know it’s an option?

The most effective way to combat shoplifters is letting them know they are watched. Whether it’s more employees or cameras, fear of getting caught is the only thing that will change this behavior.

Humanizing really needs happen throughout the store, not just at checkout, although checkout humanizing could be a factor in reducing employee-assisted theft. Placing promotional digital displays in categories, at end caps and at shelf level offers more product information and implies surveillance to those most inclined to steal.

By now consumers are so accustomed to interacting with computers, I really don’t think personalization will do the trick. If a consumer is intent on stealing, they would steal from cute little Alexa without batting an eye. As long as they think they can’t be seen. The answer is more direct cameras, warnings and prosecution.

Unfortunately, it is my belief that shoppers will always find a way to beat the system. Regardless of threats or prosecution, more (expensive) staff to monitor self-checkout or humanization, some people are simply dishonest.

My advice is before investing significant expense to overcome what is surely the exception not the rule with self-checkout, plan for the next major technological shift which will consist of a scan-and-go process for customers while selecting items at shelf (in other words, no checkout whatsoever).

There’s an old axiom in retail that says; the higher the level of customer service the lower the incidence of theft. Humanizing self-checkout will definitely help reduce theft and, as a bonus, will increase service when needed.

Self-checkout is fast and easy when everything goes well. The trouble comes when things go wrong and you can’t find anyone to help. Having an associate assigned to the self-checkout area will increase service and reduce theft; win-win.

If theft were such a concern at self checkouts, we would see fewer of them. So I am not so sure it is such a problem. They were designed to have at least one associate per four self-checkout stations. That should be step one. Cameras would be step two and a personal greeting a final step to let the customer know that staff are aware that they are using a trusted checkout procedure. Just a greeting is enough for the consumer to know that they may be watching and that they should complete the transaction correctly.

As a past store manager, the more human interaction your staff can provide, the less theft you’ll have, in general. So, even if you train your front-end staff to just say hello to each shopper using self checkout, that is a great first step. I have seen other shrink studies that have found self checkout theft is not all that high, actually, as most people are inherently honest. Utilizing the latest security technologies available for self checkout is also a must to bring the shrink down even further.

It’s clear that checkout needs reinvention as it adds little value to the customer shopping experience. However, the burden should not be placed on the customer to “change their behavior.” Behavior should change when it favors the customer, not the retailer. And guilting the customer into scanning correctly is a horrible idea (i.e. people like you scan these as the more expensive red onions). Rewriting this article from the customers POV will yield different, and more meaningful, insights.

“(A)dding more staff to monitor self-checkouts” strikes me as the only consistently reliable strategy, though of course the cost involved tends to defeat the purpose of having them in the first place.

And somewhat of a side note, perhaps, but I’d really like to see some documentation for the assertion that “people that steal just a little bit” are the main problem … that just sounds like one of those “don’t throw pebbles in the Grand Canyon” claims.

Connecting with the customer, either with the help of an employee or a personalized message from the computer, is a way to let the customer know they are being acknowledged. Just that helps. The other suggestions do the same. In the near future, we’ll see the computer able to literally talk to the customer, either verbally or through chat. That will create an even stronger connection. For now, even though the concept is self-service, having an employee there to engage and support customers is a strong deterrent as well as another positive touch-point the retailer can have with the customer.

For the organized cheaters, these subtle cues won’t help. I think you have to put people at the self checkout for assistance and loss prevention purpose. A selfie camera view is probably too extreme, but notification of monitoring is definitely needed. Make sure you have the staffing at the checkout to handle the genuine user errors in addition to theft deterrence.

I once checked out at Publix behind a woman in a white tee shirt with a box of frozen pizza sticking out underneath it. When I mentioned the obvious theft to the cashier she told me she was instructed to let it be — not to confront the thief.

Braintrust
"I think the 'extreme personalization' coupled with an obvious camera would be the ideal combination."

"As a past store manager, the more human interaction your staff can provide, the less theft you’ll have, in general."

"If theft were such a concern at self checkouts, we would see fewer of them. So I am not so sure it is such a problem. "