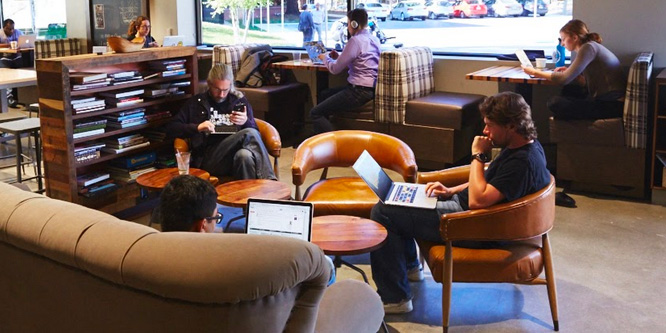 A blog entry from the National Retail Federation (NRF) spelled out four reasons college graduates with computer science degrees should consider a job at retail in today’s tight labor market.

Projects such as Target’s Tech Incubator or Walmart Labs further show retail’s “tech talent needs are beginning to rival those of Silicon Valley,” the entry stated.

Many surveys have pointed to the strong appeal of landing a job in Silicon Valley. An extensive Universum survey last year found 53 percent of computer science students wanted to work for Google, by far the most popular destination. Microsoft came in second, at 33 percent, followed by Apple (24 percent), Facebook (18 percent) and Amazon.com (17 percent). Amazon was the only retailer on the top 15 list.

Enrollment in computer science programs is booming at universities to meet demands around cybersecurity, data science and machine learning, but jobs continue to far outpace applicants as many industries are seeking similar skill sets.

DISCUSSION QUESTIONS: What are the strongest selling points retailers can use to recruit computer science graduates? Are there other ways retailers can make up for a shortage in qualified tech candidates?

Please practice The RetailWire Golden Rule when submitting your comments.
Braintrust
"I think that partnerships and accelerators are where retailers can really make up the difference. "

"Right now retail is not an attractive industry for computer science grads. In fact, it is not even on their radar."

"One of the best ways to mitigate the shortage of data scientists is to invest in technology that doesn’t require them!"

15 Comments on "Can retail compete for computer science graduates?"

Retailers are competing for tech talent — not only against each other, but against the entire universe of companies and industries looking for data scientists, programmers and so forth. And keep in mind that Amazon’s search for HQ2 is going to suck a lot of oxygen out of the room.

It’s not enough to pay competitively (something retailers aren’t known for) or to argue that Silicon Valley is unaffordable compared to cities like Minneapolis or Bentonville. It’s more important to make the case that “traditional” omnichannel retail is an industry with a future. Too many retailers have reactive hiring practices based on the economic cycle rather than a sustainable approach to their technology spending needs.

If retailers want to attract and retain developers, they’re going to have to promise not just a strong starting salary, but a commitment to keeping up with the pace of salary growth in other industries, too. They also need to commit to keeping skills cutting edge through training, continuing education support and through Google-like “free time” on the job to explore projects that develop cutting-edge skills (and deliver new innovations to the business).

I think HQ location is also increasingly something to look at as part of the offer — many retailers may not be located in “sexy” locations, but that also means there’s lots more affordable housing to be had than in the typical tech centers. However, that also means that the company should be prepared to do some “selling” of the city too, and not just the company.

Let’s see … The strongest selling points? Traditionally, retail has been one of the most frugal of industries. Once you get into retail, it gets under your skin and it’s hard to get out. (No one in the industry understands why this is so, but most everyone agrees.) It can be one of the most frustrating ongoing industries (and has been for thousands of years … ). There you have it. Why would anyone want to work anywhere else?

This is not just a competition between the retail industry and the tech industry; this is a competition with every industry. I’ve asked retailers in the past, “are you a technology company, or a retailer?” Most answer, “I’m a retailer.” — to me that’s the wrong answer, especially given the differentiating experiences, capabilities and skills required to be successful in today’s digital world.

Retailers need to let it be known all of the “cool” things they are working on; there is a marketing for talent that needs to happen. Also hiring people who are burned out from the tech industry, who can help in bringing a different cultural ideal, will help in retention. And retailers should partner with academia and technology vendors to indirectly onboard talent while also creating a potential pipeline.

Bridging my experiences between a startup and my retail background, it’s difficult to find legitimate reasons why a tech graduate would head to a retailer. We’ve often talked about retailers staying focused on retail, and using technology to move their business of retail forward, but that isn’t going to be compelling for a motivated computer science graduate.

Tech people have always jumped around a lot. Not so much looking for the best pay but also looking for the cutting-edge opportunities. So retailers along with other tech companies have to look for creative ways to attract and retain. Flexible time, free lunches, programs that allow new employees to test various areas/projects and, most importantly, a voice. Now that some retailers are ponying up to meet the salaries, don’t think for a second that it is all that is needed. It’s competitive out there! For my 2 cents.

I think organizations need to get really clear on who they are. Amazon and Google are technology companies. Down to the lowest common denominator in those organizations, even in an Amazon fulfillment center — the precision and systemization of the operation is a clear distinction from a [insert strong performing retailer here], Best Buy, REI, Home Depot, Sephora, etc. Sephora is not a technology company, and neither are any other high-performing retailers. They are just that — retailers that have adopted and leveraged technology because it’s the oxygen needed to run the business in 2018, no different than the importance of cash-on-hand.

Retail making a push to hire more CS grads is 10 years too late, and frankly beyond compensation each retailer should incentivize CS grads by giving them freedom to work on side projects, as well as having a pilot store for trialing innovation.

The strongest selling points to technology people are that opportunities exist across the U.S., tackling innovative technologies like AI, voice recognition, supply chain optimization, measuring consumer demand, connected dressing rooms, RFID and omnichannel support; and the chance to participate in a growing and competitive industry. To make up for the shortage of IT talent, retailers can provide more attractive work environments and create training programs by working with universities.

Right now retail is not an attractive industry for computer science grads. In fact, it is not even on their radar. If retailers want to recruit computer science grads they need to be more involved on campuses by making presentations to student organizations, participating in student events and offering internships and/or class projects. If this significant investment in time and effort is not made, computer science grads will continue to think of the retail industry from the perspective of someone starting in an entry-level clerk position.

One of the best ways to mitigate the shortage of data scientists is to invest in technology that doesn’t require them! There are some great tools available today from several vendors that have reduced or eliminated the need for highly-skilled administrators.

The best and brightest minds are going to go where they will be challenged and can compete. Usually this does not include retail. Retail is going to have to forget their current fringe package, and develop packages that will draw talent. Sometimes this will be done by the seat of the hiring manager’s pants. If it makes sense, give the person you want what they want to attract them to your company.

Incidentally, “good” pay as listed above does not mean competitive pay. And competitive pay can’t be considered against similar industries. It has to be competitive for the position across all industries. A new graduate is going to go where he/she gets the best deal to utilize their talent and learn from the best.

I’m not sure why retail should expect any more — or fewer — difficulties than any other industry in attracting such people, except maybe for the perception that retail = selling things (or maybe that perception IS the difficulty). But regardless, I’m confident retailers will be able to address their tech needs, either in house or by outsourcing, presumably to the companies where the coveted techies ended up.

Retail may wish to consider a consortium effort to attract and keep quality Information Technology expertise.

Let’s look at some interesting market trends and how they might be exploited to benefit the narrow margin world of retail. A larger portion of this day’s graduates finds a base of individuals with the desire to work shorter hours per day, week and year. Work from anywhere allows for this handily. Combining a syndicated company with pay as you go/need will create flexible relationships that can meet the needs of employer and employee. Add to this a world wide pool of potential employees and the options and affordability are limitless. A company like this owned by and or controlled by the clients will reduce costs even further. Look for companies “like” ADT, UNISYS, and AMAZON to give it a go.

A selling point for CS grads to consider retail over Silicon Valley? Do you want to be one of many in the depths of a VERY competitive company that Silicon Valley offers or leading change where it is needed, working on very complex and difficult needs around consumer behavior?

Want to make a difference and get noticed or simply have the name on your resume?

The key advantages retailers have for tech professionals exist only in headquarters cities. Even then, most IT departments are relatively small, particular at senior tech or leadership levels, offering few opportunities for career advancement. As an out-of-college starter job, retail (in headquarters cities) is a viable option and can be sold on cost of living, city attributes, and exciting omnichannel developments in an industry most students recognize. Just don’t expect the best and brightest to remain with that retailer longer than 2-5 years. They will go where the opportunities are, and they won’t have to move to Silicon Valley or Seattle to do so.

Braintrust
"I think that partnerships and accelerators are where retailers can really make up the difference. "

"Right now retail is not an attractive industry for computer science grads. In fact, it is not even on their radar."

"One of the best ways to mitigate the shortage of data scientists is to invest in technology that doesn’t require them!"