Can Snapchat Spectacles avoid the missteps of Google Glass? 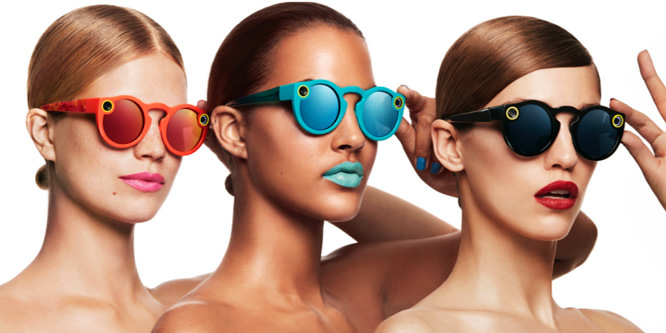 Snapchat has surprised the tech community by changing its name to Snap Inc. It has also shocked its peers by introducing the company’s first hardware product, Spectacles — sunglasses with a video camera — which instantly drew comparisons to Google Glass.

The name change moves the company beyond its popular smartphone app, which reaches 100 million visitors daily. CEO and co-founder Evan Spiegel had long described Snapchat as a “camera company.” The updated mission statement reads, “We believe that reinventing the camera represents our greatest opportunity to improve the way people live and communicate.”

Greater attention has gone to Spectacles, sunglasses with an integrated video camera that offers a hands-free way to share experiences socially. Users tap a button near the left camera and record up to 10 seconds of video. Additional taps trigger 10 more seconds each, up to 30 seconds at a time. The “Snaps” live on Spectacles until they’re transferred to a smartphone.

With a 115-degree field of view, Spectacles enable shooting circular video. The sunglasses also promise to dramatically improve recording because of their position closer to the eyes’ natural field of view. Speaking to The Wall Street Journal, Mr. Spiegel likened filming with a smartphone to having “a wall in front of your face.”

While reviewers haven’t tried Spectacles, the product is earning wide praise because it also addresses the core problems with Glass.

Available in three colors, Spectacles look like a regular pair of designer sunglasses versus the overly techy Glass. At a price of $130, it’s seen as an affordable impulse purchase rather than an investment. While including additional capabilities such as web surfing, the $1,500 price tag on Glass also made it appear elitist.

Finally, Spectacles’ outward-facing light alerts people when they’re being filmed. The small recording light on Glass made it hard for others to know.

Spectacles’ upcoming limited-edition launch could position the item as a holiday hot-seller. Speaking to USA Today, Brian Solis, an analyst at the Altimeter Group, predicted Spectacles would land “on everyone’s Christmas list.”

DISCUSSION QUESTIONS: How would you rate the commercial appeal of Spectacles relative to Google Glass? Do you predict that Snap will prove to be a winning product?

Please practice The RetailWire Golden Rule when submitting your comments.
Braintrust
"It removes friction from capturing moments quickly and as you truly see them."

"I am sure it will be very popular in the short run, especially with my grand-kids (at least the older ones)."

"Whether they will continue to use them after the initial novelty wears off is yet to be seen."

8 Comments on "Can Snapchat Spectacles avoid the missteps of Google Glass?"

At $130 a piece, many consumers will try Snapchat Spectacles. Whether they will continue to use them after the initial novelty wears off is yet to be seen. The problem that people have about being recorded without their knowledge is still there. And they only have a single use, whereas Google Glass offered Internet connectivity.

This one I find interesting. It feels like it could just be a fad (which isn’t a bad way to start the new Snap brand) and, unlike Google Glass, Spectacles could be marketed as fashion. This is one to keep an eye on.

Cost and styling already set this apart from Google Glass. I am bullish on this concept, as it removes friction (the mobile phone) from capturing moments quickly and as you truly see them.

This strikes me as a toy, not a device. I am sure it will be very popular in the short run, especially with my grand-kids (at least the older ones). But what I ultimately want in my “glasses,” and I think is the future, is that the “glasses” replace my phone so I can do everything through my glasses that I now must take my phone out of my pocket to do.

The biggest advantage Spectacles has over Google Glass is price. Google Glass was priced to high for almost everybody, except extremely affluent shoppers. At $130, Spectacles are attainable for a much broader audience to buy as a novelty or impulse purchase. It will appeal to early adopters who are interested in having the newest shiny object that makes them feel hip and cool. The timing of the launch is perfect for the holiday season and I am sure you will see Spectacles on a lot of wish lists. While the price is fairly reasonable, the down-side is the manual process to transfer the videos to your computer and then to social media. This is an obvious inconvenience for a platform that is built on the premise of instant sharing of videos on Snapchat from smartphones. My guess is that Snap will sell a bunch of these glasses and a good share of them will end up in drawers or on shelves as consumers find it to be too much of a hassle to transfer the… Read more »
2
|
0
-   Share

Not a chance of success here. The price point might be considered affordable for some, but sunglasses are often considered disposable (they get lost, left on tables and stepped on). Certainly there is a market for designer sunglasses and many consumers pay considerably more for their shades… but I doubt if those customers want to wear sunglasses with cameras.

I get it — Snap, Inc is looking to expand their footprint and I give them kudos for the extension, but Snapchat is what it is and I don’t need another device to participate. The phone works very fine indeed, thank you very much.

We still have quite a ways to go to see widespread adoption of wearables … especially for the eyes. I think people are still not seeing a need for this on an ongoing basis in their lives today. I do see potential adoption in the near future (2 years or so) when convenience, fashion and desire align to drive the product category’s success.

Like a cross between a GoPro and Google Glass, Snapchat Spectacles have a decent chance of success, at least for this holiday season. Its best attribute is its moderate price point — a risk many of us could bear for what amounts to a clever toy.

Its creative limitation — 10 – 30 seconds at a time — is also what may make it culturally acceptable, since it is an inefficient tool for stalkers or for making long-form videos. The prominent “recording” light makes stealth impossible — also a good thing.

My prediction is Spectacles will be a one-season blockbuster. It will help elevate Snap Inc. and lay the groundwork for its next camera innovation. Then, like one of those videos, it will simply expire.

Braintrust
"It removes friction from capturing moments quickly and as you truly see them."

"I am sure it will be very popular in the short run, especially with my grand-kids (at least the older ones)."

"Whether they will continue to use them after the initial novelty wears off is yet to be seen."