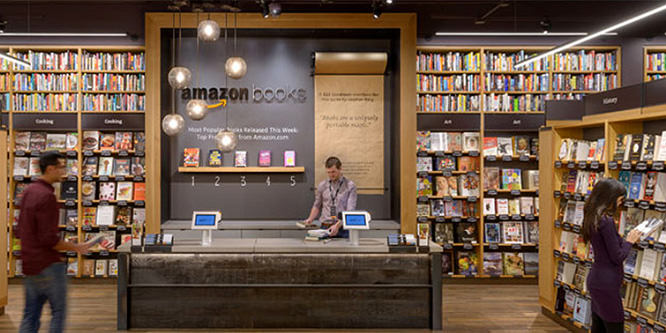 Since its initial rise, Amazon has posed a significant threat to a wide range of retail competitors, and yet to date the e-tail giant has not suffered in a meaningful way from backlashes. Will opening physical stores change that?

Following word of Amazon Books opening its first Chicago location in Lakeview in 2017, 17 Chicago-area book stores sent out a joint statement touting the benefits of independents and warning of the negative impact Amazon has on community businesses.

“Independent bookstores pride themselves on serving customers who read voraciously and eclectically and on using books to create a conversation with customers and their communities,” the statement reads. “Booksellers get to know their customers so that they are able to make personal recommendations that enrich and sometimes change people’s lives.”

The statement claims that while independent books stores have always paid taxes that support local communities, Amazon only began to do so following lawsuits. Studies were also cited alluding to Amazon’s negative impact on local retail jobs.

Finally, the letter states that industry experts speculate that the purpose of brick-and-mortar Amazon stores is to continue to collect information that would help Amazon’s non-book sales opportunities. For independent bookstores, however, “customer support is the lifeblood that helps sustain both the stores and the vital communities those stores create.”

Women & Children First, a bookstore in Andersonville, IL, now displays a study detailing how Amazon impacts local communities on its front window. The Chicago-area stores plan to partner together on events that support communities, including bringing in authors, highlighting local authors and working with other local businesses.

Amazon Books has so far opened only two locations, in Seattle and San Diego. A third is planned for Portland, OR.

Amazon’s bitter, high-profile dispute with Hachette over e-book pricing in 2014 heightened concerns in the publishing community over the control Amazon has over book sales. The company also suffered negative press coverage last year after a New York Times reported on its working conditions.

Nevertheless, a SurveyMonkey survey conducted in May for Fortune found Amazon ranked first in the categories of “most trustworthy” and “company you’d most like to invest in.”

DISCUSSION QUESTIONS: Does Amazon face greater backlash risks as it opens physical book stores? Is it fair game for independents to promote the alleged negative repercussions of Amazon’s arrival? How should Amazon respond if such efforts escalate?

Please practice The RetailWire Golden Rule when submitting your comments.
Braintrust
"Although I buy quite a few books from Amazon, their vaunted ability to pick books I'll like has been entirely and thoroughly unsuccessful."

16 Comments on "Could Amazon’s physical stores fuel a backlash?"

Yeah, there’s an issue here for sure. Amazon has to be careful not to become the next Walmart (and I don’t think the country is ready for another one, to be honest).

It is absolutely fair game for independents to promote negative repercussions.

Couple this with Amazon’s subtle price increases online and you will find an erosion of trust. Amazon has always been my go-to source for everything. But over the past six months, they have come in more than 25 percent higher than other sellers on everything from skin creams to sneakers.

Hubris is always a bad thing.

This is not unlike the reported demise of independent bookstores way back, when Amazon only sold books. Such a backlash is expected by independents and is part of free expression. Most of the mom-and-pop bookstores today have a little different clientele than Amazon, so while they likely will feel some hurt from Amazon stores moving into their markets, it probably won’t have significantly more impact than online sales do.

Mainline books are a commodity like diapers so, as has been stated endlessly here, differentiation and exceptional service are the ways to stay relevant and retain customers. Not easy, but Amazon is far from perfect, so there are opportunities for determined independents.

A backlash should be expected. And while I share the concerns of the independent booksellers, I think their energy will be better spent focused in their stores continuing to make them the far better places to shop than Amazon’s physical store.

Should Amazon worry about the backlash? Probably not. My expectation is that Amazon stores will have significant challenges as they work to thrive — like figuring out assortment and display. Although I buy quite a few books from Amazon, their vaunted ability to pick books I’ll like has been entirely and thoroughly unsuccessful. My guess is their stores will struggle as well — especially if they choose to implement stores with too much algorithm and not enough human influence on the selection and display.

Some say that any publicity is good publicity — when managed correctly. But the arm waving about Amazon stores deserves a deeper consideration. Their physical presence offers all the benefits that stores have offered … traffic, engagement and product profile with another arrow in the omnichannel quiver. I predict that the Amazon store experience will include high quality virtual reality in the not-to-distant future, with the associate support that this requires. Through this, Amazon will enjoy increases in profile as a retail leader and their opportunity to learn how this digital “screen media” selling is best applied to online shopping.

It’s fair game for Amazon to open physical book stores and for existing stores to fight back. Amazon is the retailer that is trusted most by consumers. It has a greater market share than its next eight competitors combined. Local booksellers have a loyal following of dedicated consumers. Game on!

I did not see much merit in the arguments raised by the book stores. For example, Amazon has become much better at giving “personal recommendations” than neighborhood stores. Again, you can CHOOSE between regarding progress as a disaster or as an opportunity.

I think that the internet is a huge opportunity for progressive physical stores. But they will need to change their business model completely to take advantage of it. Selling products is no longer a profitable business and will never be but physical retailers can thrive by capitalizing on the display and other services.

In any case, whining is hardly the way to go.

Amazon’s success as a retailer is undeniable. Their foray into the physical store should validate the incredible value of the physical shopping experience. Make no mistake — Amazon is using bookstores to explore and experiment for a much broader retail experience. It’ll be very interesting to observe what Amazon will bring to the physical experience as they intimately know and can deliver from the virtual store. Unlike anyone else, they’ll bring a true understanding of “being digital” to the brick-and-mortar experience.

As for the independent owners promoting their cause and alleged repercussions — absolutely! Amazon is by no means the only option and one that comes with a price. Millennials in particular are drawn to brands with a true moral compass and social responsibility. Amazon has Prime. Let the market decide where, when and how they shop and purchase.

I’ll suggest a modification on Amazon’s success as a retailer. They’ve succeeded in dominating the discussion. And their investors have subsidized their lack of a profitable retail business model. But since they don’t make retail profit, are they a successful retailer? Hard for me to make that statement.

I’m beginning to wonder if Amazon’s true endgame isn’t to subsidize their retail in order to build services they can sell to others — and they’ll end up making all their money on services and not retail. Time will tell.

Will Amazon face backlash? You betcha! Amazon may provide great service and excellent fulfillment online but let’s face it, they’ve never really been in the retail business running stores, facing live customers and understanding how to localize assortments.

While I am sure they will hire some folks with store expertise, there is a lot of competition out there and they are the new kids on the block. Just sayin’.

Yes, yes and more of the same. Amazon was ridiculed when they launched at the end of the last century and has been under attack by all retail segments as they succeeded to capture more of the traditional brick-and-mortar sales. By coming full circle and adding physical stores to their menu of choices, greater backlash is most certainly to be expected by independent bookstore owners. It is perfectly fair for the independents to differentiate between themselves and Amazon as well as project two distinct futures with and without Amazon’s encroachment on the physical store front. That’s what competition is all about. And consumers will vote with their wallet. Amazon’s response need not be any different than with its earlier business model rollouts. The company will stay the course, listen to their customers, learn from early pilots, leverage its assets in ways others cannot match and use technology to create new and differentiated customer experience. Looking further in the future, will Amazon stop at physical bookstores or will they expand to other categories as they did… Read more »
1
|
0
-   Share

At this point, independent booksellers have learned to live with Amazon, so Amazon’s foray into physical bookstores is not that big a deal. Many independent booksellers are thriving in the Amazon-dominated world by providing the valuable services mentioned in the article: holding events, bringing in authors and partnering with other businesses.

Positioning Amazon as “the evil empire” is part of the independent booksellers’ marketing appeal as they enlist their customers as warriors against Amazon’s hegemony. Amazon should just ignore these harangues; it will earn its fair share of business even if the independents succeed in creating an alternative movement.

Facing the realities of a physical retail store will be far more onerous than any consumer backlash.

Amazon ought to be reinventing retail — not competing against independent book stores by looking like … another book store. Edward de Bono called it sur/petiton rather than competition.

C’mon Amazon, you can do something more amazing than this.

Going in the wrong direction. Forgetting their roots and the game plan that got them to the Super Bowl is a grave mistake. Profit lies in the fact that they can be everything to everyone. A brick and mortar is fixed and inflexible….

But here’s the trick … Amazon doesn’t have retail profit. Their profit comes from content, devices, and mostly from cloud services. I believe they are pursuing brick and mortar (like most other online operations) because online only is a dead end.

We’ve seen this in advertising. Internet-only concerns (like VistaPrint) have been forced to pursue TV because they bump against a growth limit online. Most online-only concerns shift to traditional structures in order to scale. I think Amazon is discovering this as well.

Indeed, online retailers have to compete on price alone and are destined to make zero or negative profits. Amazon, like Facebook, is inventing and dominating an entire industry and is rightfully exempt by its investors from making profits. Eventually, I believe they would both be extremely profitable. Amazon is making 15 percent by servicing other zero-profit-forever online retailers.

Amazon’s success is largely because you can order anything from anywhere at any time. It’s impossible to replicate this in a brick and mortar format for so many reasons not the least of which would be the cost of carrying massive inventory in myriad locations.

Braintrust
"Although I buy quite a few books from Amazon, their vaunted ability to pick books I'll like has been entirely and thoroughly unsuccessful."