Did retailers shine or go dark on the rare solar eclipse sales opportunity? 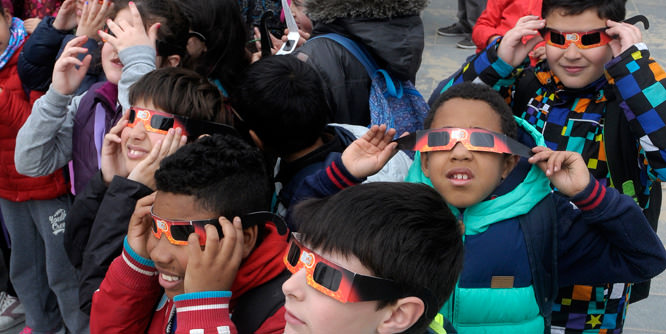 Those who were around in the eighties may remember the song “The Future’s So Bright, I Gotta Wear Shades” by Timbuk 3. It’s a lyric that could speak to retailers who were forward-looking enough to stock up on special glasses required to view the first total solar eclipse to be seen in the continental U.S. since 1979.

The impending astrological event, which will take place on Aug. 21 when the moon will move between the sun and the Earth, has proven to be a gift, of sorts, for retailers that have seen heavy demand for solar eclipse glasses.

According to Slice Intelligence, online sales of eclipse glasses have grown at a rate of 52 percent week-over-week since summer began. Forty-eight percent of all eclipse glasses were sold in the first 10 days of August, and sales have not yet leveled off.

Sales of the glasses run across all demographics, with Generation X, the group most likely to have kids, accounting for 40 percent of all sales to date. Next come Baby Boomers at 32 percent and then Millennials at 23 percent.

Women, according to data derived by transactions from Slice’s panel of five million online shoppers, represent 56 percent of those purchasing eclipse glasses. The average price for the special spectacles is around $20, although prices have fallen since glasses first went on sale when summer began. This month, the average price of glasses has fallen to $15. The highest per capita spending on glasses has been in South Carolina and Oregon, the first and last states to view the eclipse.

Finding eclipse glasses with just a few days to go has become more difficult as local stores in some markets run out-of-stock. In Tallahassee, FL, for example, local Home Depot, Lowe’s and Walmart stores are all sold out.

In the past week, Amazon.com issued a recall of eclipse glasses sold on the site when the company was unable to confirm those sold met international safety standards. Viewing a solar eclipse without the proper glasses could result in vision loss.

DISCUSSION QUESTIONS: Were retailers prepared for the consumer demand for solar eclipse glasses? In what other ways might retailers leverage the astrological event for their own short-term benefit?

Please practice The RetailWire Golden Rule when submitting your comments.
Braintrust
"I live in the path of 99.6% totality. I will not be able to watch the eclipse because every retailer in Portland OR is sold out of eclipse glasses."

"This is a perfect opportunity for retailers to express their creativity and bring people into their stores to experience their brand ethos."

"If there has ever been a case study around demonstrating business agility in retail, this is it!"

10 Comments on "Did retailers shine or go dark on the rare solar eclipse sales opportunity?"

This is an excellent example of an opportunity that is difficult to take advantage of because people just don’t have the time, quite simply. This is why retailers need to leverage the newest technology capabilities that capture external data sources like local news events, social chatter, weather, etc., and use this information to gauge shopper interest in local events. We are seeing this work in some really innovative retailers as we speak. Cool stuff.

Warby Parker announced that they will be giving away FREE eclipse glasses in their stores. There are still a lot of retailers with inventory that are promoting their last-minute deals. But I am not certain an in-stock position on glasses is the real retail issue.

I don’t see a lot of creativity around turning this into a fun event that can generate engagement online and in stores. Chiquita Banana made a funny video claiming responsibility for the eclipse and there are some other brands like Eclipse Beer and Eclipse Shoes that are doing a good social media job.

I would have expected more fun themes around the event. Even from clothing retailers. The right outfit for eclipse viewing? A product so wonderful you can look at it without special glasses? That is where retailers dropped the ball. Having fun and engaging with customers.

Warby Parker will get increased traffic from new visitors who may have never heard of them. At some point, they will convert a few into customers.

All the stores are empty. Head offices made decisions to merchandise the glasses, but by and large store employees haven’t a clue as to what you are talking about. This should become a classic case study about not educating store associates about a huge opportunity.

These kinds of discussions are always interesting because the shine the spotlight on a central question of retail today: Can retailers capitalize on an event by selling more product, or will retailers seize the opportunity to sell more than a specialty product at a one-time event? I live in the area of the total eclipse and it is interesting to see how many local retailers are using the event to sell their brand and relationships. The small shops, restaurants and hotels have been particularly good at using social media to showcase their business and brand. Some are even giving away the glasses in order to create an experience that will create a relationship for years to come. Here are just some of the examples of entrepreneurs capitalizing on the experience of the eclipse to sell their brand and business: Solar homes are being rented as showcases of technology and services; Camera shops are giving classes on how to photograph the event; Restaurants are taking to the streets for “eclipse dining” to create an experience that… Read more »
2
|
0
-   Share

I feel like a broken record sometimes, but my feelings are very strong that the eclipse is yet another opportunity to create experiences that last far longer than the margins on the glasses. I frankly could care less about a few bucks made from the glasses. This is a perfect opportunity for retailers to express their creativity and bring people into their stores to experience their brand ethos. The bigger opportunity — once again — lies in building relationships through creative engagement.

I absolutely agree! So many creative, relationship, stewardship opportunities.

As I’ve said before, not every “event” is a “(sales) opportunity.” That we could enjoy this, apparently, without an “official” beer or credit card was, I found quite refreshing (now please excuse me while I turn down that annoying “Labor Day Car Sale” ad).

If there has ever been a case study around demonstrating business agility in retail, this is it! This could have been a wonderful opportunity for retailers in almost every segment to be creative and drive traffic by associating all types of merchandise to the eclipse in fun ways. However, most simply missed the mark. In some ways this can be seen as an exaggeration of the fast fashion trend in apparel. Agile retailers should have been able to leverage integrated systems across their supply chain, fulfillment, merchandising, and everything else in between to leverage eclipse glasses to drive interest in other products. The issue is, do most retailers have the infrastructure in place to support such agility? Not just in their back end systems, but all the way down to store infrastructure. I suspect this is why so many missed out on this opportunity.

I live in the path of 99.6% totality. I will not be able to watch the eclipse because every retailer in Portland OR is sold out of eclipse glasses. I wish Starbucks had taken the opportunity to offer solar eclipse glasses with every coffee drink as an add-on. Retailers missed a huge opportunity.

Retailers went dark. From poor inventory forecasting to purchasing glasses from sub-optimal suppliers and forced recalls, we can accurately call this — for the most part and for retail as a whole — a poor showing.

Braintrust
"I live in the path of 99.6% totality. I will not be able to watch the eclipse because every retailer in Portland OR is sold out of eclipse glasses."

"This is a perfect opportunity for retailers to express their creativity and bring people into their stores to experience their brand ethos."

"If there has ever been a case study around demonstrating business agility in retail, this is it!"