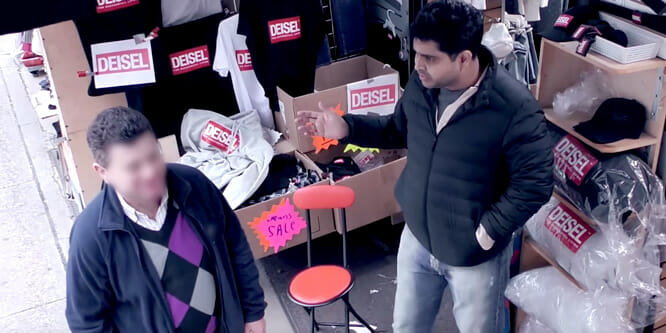 If you can’t beat ‘em (them being counterfeiters), then co-opt them. That appears to be at least part of the thinking behind a pop-up shop opened by Diesel on Canal Street in New York’s Chinatown. With an attitude that said these products just fell off the back of a truck, Diesel employees disguised as peddlers hawked what appeared to be fraudulently branded merchandise.

Convincingly counterfeit Diesel products were emblazoned with a misspelling of the brand name (“Deisel”), wrapped in plastic bags and haphazardly tossed into boxes in the middle of the store floor. Signs written in neon marker hung around the store to top off the knock-off vibe.

When the brand revealed its counterfeit products to be real, shoppers flocked to Diesel’s pop-up shop to load up on authentic, one-of-a-kind Diesel merchandise. In fact, Diesel went so far as to suggest that customers resell its limited edition finds online for a slice of the profit.

There are more reasons for this stunt than initially meet the eye. The brand’s promotional video on YouTube — “Deisel – Go with the Fake” — suggests that the company’s false branding stunt was also a way of rewarding shoppers for their impeccable fashion sense in recognizing the quality of original Diesel merchandise, even sans the big brand label.

Others, however, have suggested that the real reason for the stunt was to help Diesel connect with a new generation of shoppers for whom traditional brand names don’t carry the same clout as they did for their predecessors.

Andy Bird, chief creative officer at Publicis — the ad agency behind the fake counterfeits — told Adweek, “There aren’t many brands that would take a calculated risk like this, but because they [Diesel] kind of know that they already have the cachet with the past history of advertising, they’ve always been a bit more adventurous and it fits perfectly with their outlook.”

The large “Sold Out” banner on the temporary “Deisel” merchandise section on the brand’s website testifies to the raging success of the initiative. More counterfeit “Deisel” products will be up for sale on Diesel’s website on February 15th, but the boosted brand image and heightened awareness of their “Go with the Flaw” campaign will last much longer than the limited-edition merchandise.

DISCUSSION QUESTIONS: What do you think of Diesel’s decision to hawk authentic knock-off merchandise? Is this what it takes for a brand to achieve resonance with next generation shoppers?

Please practice The RetailWire Golden Rule when submitting your comments.
Braintrust
"It’s an authentic conversation to have with consumers and creates a point of differentiation between the actual fakes and the authentic product."

"It creates an real conversation and puts the brand in the middle of it while also using solid mix of humor, digital and real world experiences."

"In today’s advertising and marketing world where one often wonders if there are any original ideas left, Diesel gets the award."

It’s cheeky and doesn’t shy away from the bane of every big-name label. I like it because it’s an authentic conversation to have with consumers and creates a point of differentiation between the actual fakes and the authentic product.

Hopefully there was a ton of insights for the brand to takeaway from it as well. It’s a great conversation starter — if they carry this forward on social media, the engagement may well be worth it.

I commend Diesel for their originality and excellent delivery of this concept. In today’s advertising and marketing world where one often wonders if there are any original ideas left, Diesel gets the award. This campaign will be successful for them. Diesel will obtain brand awareness, is showing their customers they can have laugh at themselves and most importantly will create more than just curiosity about the products, which means sales. Nicely done!

Brilliant — deception rewarded by getting the “goods” is a fascinating strategy. Not many brands can pull this off! Kudos to Publicis and Diesel for taking a brave step out in front of a lackluster category.

One of the best ways to market: fake controversy. And Diesel took that to another level. They got so much press for doing this that you have to say “brilliant” in the same sentence. And also funny, hip, stupid, clever and a thousand other such adjectives that make their target customers love them even more. Love it.

High marks for chutzpah and originality — I guess — but I’m not sure it does that much to expand Diesel’s trans-generational reach. And if I were a counterfeiter, it might inspire me to copy the strategy by flogging goods of my own — authentic knockoffs for Gen Zers whom, we are constantly told, value authenticity above everything else.

Seriously being cheeky and so-hip-it-hurts may work once or twice, but it’s not a sustainable brand-building strategy over time. Hipness is a tough foundation for a brand because hipsters are the most fickle of all markets, especially when they think they are being catered to and/or patronized. There’s a perilously thin line between being, “My Man,” and “The Man,” it seems.

All that said, it’s a stunt and it seems to have gotten them some publicity and moved some goods. We’ll see how well their next trick works.

This is a brilliant idea and very cleverly executed. I’d love to know the demographics of the shoppers they got through the doors and if they are in line with the brand’s core target but that’s really irrelevant. The job of reaching that core at mass scale was likely done by the share-ability of the campaign.

It’s a great idea and very creative. It taps two important elements to a pop-up store or a brick-and-mortar store in general 1.) It offers a store experience (albeit not the sexiest one); 2.) It’s creating a demand for something that’s not out there on the market, unique/authentic products.

I also think they might be playing off of Supreme a bit — it’s the highest re-selling brand online. The next generation is certainly looking for unique, quality items as well as experiences.

It is a clever idea and was successful. However, does it promote looking for knockoffs? It is one thing to recognize that knockoffs exist, to have some fun with the idea, but this stunt can be seen as approving of or legitimizing knockoffs or at least the search for knockoffs. I don’t think this is what Diesel intended but joining them could be taken as legitimizing the practice because it is impossible to fight it.

This is a neat attempt to increase brand awareness while actually boosting brand value, in a reverse-logic way. It’s almost a grassroots effort to tactically reach the individual shopper in an audience that major brands don’t generally target. It’s just one more way to grow revenue incrementally, potentially.

I am not sure if this is what it takes for a brand to achieve “resonance” with next generation of shoppers. There a hundreds of ways to do that. However, the creative and the campaign are great ways to stand out from the crowd while also pointing to a very serious issue of knock-offs and counterfeit goods that is a huge area of loss and waste in the fashion and apparel industries.

I give them high marks for creativity and from the looks of what was presented, they also sold a fair amount of product. It creates an real conversation and puts the brand in the middle of it while also using solid mix of humor, digital and real world experiences.

Simply brilliant due to the authentic connection to the brand’s DNA and the flawless execution physically and on various digital media including their website. There is an assumption of a strong connection between the brand and the agency (Publicis) which was essential to pull this off without negative repercussions. Well done!

Braintrust
"It’s an authentic conversation to have with consumers and creates a point of differentiation between the actual fakes and the authentic product."

"It creates an real conversation and puts the brand in the middle of it while also using solid mix of humor, digital and real world experiences."

"In today’s advertising and marketing world where one often wonders if there are any original ideas left, Diesel gets the award."