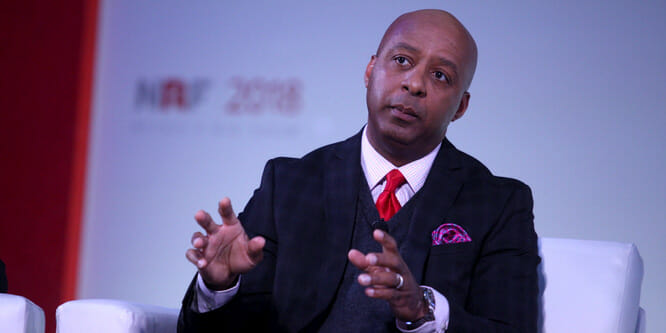 At a panel discussing diversity at last week’s NRF Show, Penney’s CEO Marvin Ellison recalled a “key learning” he gained early in his career when he reached the corporate office of his former employer, Target, in Minneapolis in the early nineties.

Said Mr. Ellison, “At that time, the corporate office was not very diverse. They worked very hard to make it nurturing and enduring. But I felt out of place.”

Mr. Ellison is African American and from the south. He had spent his career on selling floors. He added, “The core instinct was to blend in because I was so different.”

After three months of frustration, his wife reminded him of a frequent phrase of his father: “Nobody can beat you being you.” Stated Ellison, “In other words, embrace who you are. Embrace your gift. Embrace your diversity and stand out and don’t be afraid.”

Mr. Ellison’s career took off, he believes, because he “wasn’t commoditized.” Co-workers were eager to hear about his unique experiences and opinions.

While scorecards, mandates and greater commitments from the c-suite have helped expand diversity, creating environments that help everybody “fit in” remains a challenge.

Best Buy’s Hubert Joly said creating environments “where people can be their true selves” is critical because “that’s where the magic is.”

Mr. Ellison advises Penney’s women executives not to try to “be one of the guys” because of the insights they bring as mothers heading households and as women managing careers.

Clorox’s Benno Dorer encourages his staff to explore their conscious and sub-conscious biases. He continually undergoes his own self-evaluation to make sure he’s “walking the talk because people mirror my behavior.”

Describing the process as an “ongoing education,” Mr. Ellison challenges his executives to have “truthful conversations” around the subject. He said, “Oftentimes when you’re worried about being polite or you’re worried about not saying the right things, you miss the opportunity to have the discussions you need to have.”

DISCUSSION QUESTIONS: What advice do you have for expanding diversity in retail, whether at the c-level or selling floor? How can management help individuals with more diverse backgrounds feel less like outsiders?

Please practice The RetailWire Golden Rule when submitting your comments.
Braintrust
"You can't have 'corporate' culture any longer that is distinct or separate from the rest of the world."

"The real key to making diversity effective is to learn how to recognize, encourage and celebrate difference rather than just accommodating it."

We’ve made tremendous progress through the years with diversity, but we still have a long way to go. People themselves at all levels have to learn to be comfortable with one another and not hold onto outdated stereotypes brought on from what their parents taught them or what they see on TV or films. We are all brought into this world the same way regardless of color or background, and everyone deserves an equal chance. Many companies have expanded diversity training which is very important, but the bottom line is “be yourself” and let others learn to respect you for who you are. Easier said than done when dealing with prejudices and fear that someone is “different.” But the more we commit ourselves for achieving equality everywhere, the higher chance that someday we WILL make it happen.

Well, the easy answer to the second question is to have more individuals with diverse backgrounds. Then they won’t feel like outsiders.

I feel like it’s time to have a wider discussion about corporate culture. Corporations arose out of something very hierarchical and regimented, and we’ve been shifting over time to something more fluid, with fewer and fewer clear boundaries between “work” and “life.” I think that’s part of why all of these issues are coming to the fore. You can’t have “corporate” culture any longer that is distinct or separate from the rest of the world — it’s just a microcosm of all the challenges we have in the larger cultural sense. And companies that serve consumers need to make sure their culture is healthy and positive, because it’s increasingly on display and part of the value equation that consumers make when they make purchasing decisions.

The point about having more diversity is to drive better business results. That’s what executives at each company should be motivated to improve or drive. Management would need to embrace new ideas and new ways of tackling problems. These different approaches deliver improved business performance breakthroughs. Helping diverse individuals feel more comfortable will have to start from the top.

It is sad that in the year 2018 we’re even having discussions about inclusivity and diversity. However, I’ve never met anyone with a bad thing to say about Marvin Ellison. As unjust as it was, I’m sure his own struggle helped to drive the turnaround of J.C. Penney. This is a man who treats others with respect and dignity, who inspires colleagues and whose decency and good sense allows him to connect with consumer needs.

I think most companies with failed diversity models have one thing in common — resistance to true diversity. There are a variety of tripwires along the path to true diversity. The first is, “Let’s hire/promote/create a board seat for, “one of everything,” — i.e., women, members of the LGBTQ community, Hispanics, Asians, African-Americans, etc. In harsher times, this was called tokenism. The other is to adopt the proportional fallacy, i.e., “If women represent 52 percent of the population, then 52 percent of our executives should be women.” What both these approaches suffer from is the assumption that true diversity is just a numbers game. As Marvin Ellison noted, when he was viewed as a quota figure whose job was to adjust to the existing corporate cultural model he was frustrated and his ability to impact his company for the better was thwarted. Once he embraced himself, and his co-workers began to appreciate and embrace his unique experiences, the real power of diversity began to manifest itself. Diversity takes on myriad forms — gender, sexual orientation,… Read more »
10
|
-1
-   Share

There’s plenty of room for growth, and that’s not exclusive to retail by any means. First, understand why a diverse workforce leaves your company or doesn’t apply. It’s up to management and leadership to really commit to changing the culture and business practices by tackling potentially uncomfortable topics, e.g., the myth that lack of diversity is due to a pipeline problem. No one strategy alone will change a company, but rather a combination of comprehensive D&I initiatives, developing a code of conduct, surveying employees regularly, developing effective and fair management practices, etc.

The Kapor Center conducted The Tech Leavers Study to understand why people voluntarily left the tech industry. It’s well worth a download as the challenges faced in tech are similar to other industries.

We can’t force “diversity” on others. We can’t force it on ourselves. The best way to expand is to start at the top and find the right people in the right places up and down the corporate chain to make it happen. If we put a group of people together that want to make change happen, it will happen. It will take time, more time than those seeing themselves as the outsider would like. But it will happen. The key will always be the commitment of the initial group working and growing together as a team knowing it will happen over time; and staying the course.

While we usually hear phrases such as “it starts at the top” I’ll offer a different perspective for the retail industry — it starts at the bottom, moves through the middle, and ends at the top. All levels are affected and benefit from diversity.

Marvin Ellison is right that “Nobody can beat you being you” — the reason we talk about diversity so much is that we all understand that corporate culture moves forward and improves with the positive exchange of differing ideas at all management levels. Without that diversity of thought, new ideas become old ideas rehashed and lack the originality that move a business forward.

Acceptance of new ideas is important, but what may be most important in making people feel less like outsiders is to simply give feedback. Giving employees feedback goes a long way to encouraging them to raise more and more new ideas – they won’t all be great ones, but that’s ok, as long as the exchange of ideas continues to happen. It all starts with giving feedback!

Braintrust
"You can't have 'corporate' culture any longer that is distinct or separate from the rest of the world."

"The real key to making diversity effective is to learn how to recognize, encourage and celebrate difference rather than just accommodating it."