Do the 2015 holidays point to a bigger future for e-commerce? 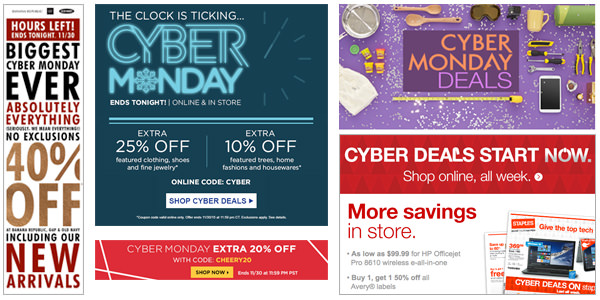 It may be true that online shopping will never replace stores, but for the first several days of the 2015 holiday shopping season the retailing world got a glimpse of what it would be like if it did.

According to various reports, it appears as though Cyber Monday may very well have become the biggest day ever for e-commerce sales coming on the heels of Thanksgiving and Black Friday where more people, according to the National Retail Federation (NRF), shopped online than visited stores.

NRF’s Cyber Monday Expectations Survey conducted by Prosper Insights & Analytics over the weekend predicted that nearly half of shoppers (121 million) planned to go online yesterday to buy something. While the number was down from 126.9 million in 2014, it followed the Thanksgiving weekend during which 103 million people shopped online.

Adobe predicted that online sales would reach nearly $3 billion yesterday, a 12 percent increase over Cyber Monday 2014. Both Adobe and NRF predicted significant growth in sales being made through smartphones and tablets. Walmart, via USA Today, reported that 70 percent of its online traffic came through mobile devices.

Traffic was so heavy at Target.com that the site put shoppers in a holding queue between 9:00 a.m. and 10:30 yesterday morning. The company had issues with orders through its mobile apps into the afternoon.

According to a Star Tribune report, traffic to Target’s site at noon yesterday was twice as high as at any other previous time as consumers were drawn to 15 percent across the board discounts and free shipping and returns on all orders.

Does the increase in shoppers going online to purchase products since Thanksgiving suggest an even bigger future for e-commerce than previously predicted? Will the rest of the holiday season revert to traditional patterns with a greater number of consumers shopping in stores than online?

Please practice The RetailWire Golden Rule when submitting your comments.
Braintrust
"You have to wonder why many retail "pundits" were surprised by the Black Friday weekend numbers ... the consumer trends for online shopping behavior have been building for a long time."

"" ... an even bigger future ... "? That would be a pretty tough order, given that some predictions have as much as 30 percent of all shopping being online/mobile by 2020."

"For the trailing five years, e-commerce has been growing at around 15 percent year-over-year. And each year, big analyst firms predict slowly tapering growth."

14 Comments on "Do the 2015 holidays point to a bigger future for e-commerce?"

You have to wonder why many retail “pundits” were surprised by the Black Friday weekend numbers … the consumer trends for online shopping behavior have been building for a long time.

We are at the proverbial “tipping point” — consumers have already made shopping online the new normal as part of their shopping journey. Amazon has become the first place consumers go to look for product information.

No, online will not suddenly replace stores this year. Yet Amazon is poised to pass Walmart in holiday sales this year or next.

Several surveys indicate that consumers plan to spend 40 percent of holiday dollars online. If that prediction is anywhere close to being accurate, online will definitely continue to grow, and Target had better work out the issues causing website crashes.

The bottom line is that retail metrics are outdated and just plain wrong. It’s not about how much a retailer sells online versus in stores, it is now about how a retailer can grow total sales (profitably) across all channels.

The future for e-commerce looks bright, as more and more consumers have access to high-speed Internet connections and are coming to realize that it’s easier to buy online. I expect that online sales for this holiday season will exceed all previous years. There will be glitches, like Target, but that won’t stop the online juggernaut.

That would be a pretty tough order, given that some predictions have as much as 30 percent of all shopping being online/mobile by 2020. I think what it says is that the future is nearer than we thought. (OK, my nephews had just watched Back To The Future again over Thanksgiving — what can I say.)

The biggest delta versus expectations for me is the speed and enthusiasm the Boomers and older have shown in adopting online tools of all sorts. One of the biggest chuckles for me is when pundits and researchers bemoan the loss of market share for Facebook among teens and younger. What they totally miss is the increased adoption of Facebook by the generations with the money. Give me more Boomers (and more Facebook stock) any day.

For the trailing five years, e-commerce has been growing at around 15 percent year-over-year. And each year, big analyst firms predict slowly tapering growth.

At fewer than 10 percent of all retail sales, e-commerce has a lot of runway. Expanding assortments, improving convenience, intensifying price competition and a generation of digital natives are all accelerants.

We have seen the future and it is now. E-commerce is an avalanche that will continue to pick up momentum this year and in future years. No, it will not replace brick-and-mortar. But we will see the online buying trend get stronger.

Why are we having this discussion?

We already know that a majority of sales are influenced by mobile, and nobody waits for “Cyber Monday” any longer. The idea that there’s a limit on e-commerce is quaint at best.

The challenge for retailers is to link their disparate systems so they can gain visibility across the enterprise and serve the customer in the channels she chooses.

One major failure yesterday that I believe needs to be solved for the future of e-commerce is out-of-stocks. Adobe reported that 15 percent of page views in the morning yesterday were on OOS products. Obviously, solving this problem via the supply chain and inventory systems is a tough nut to crack. But I believe there is a much simpler fix from a customer engagement standpoint. I monitored the customer service Twitter accounts of many top retailers yesterday, including Target and Best Buy. I estimate more than half of the complaints were about out-of-stocks. Yet it seems the only answer customer care reps could offer was: “Please keep checking back at the site for availability.” Not an ideal response, especially because the e-commerce research firm the e-Tailing Group just did a survey where respondents were asked what they did when encountering OOS products. Fifty percent said they go to a search engine to find another source, and 46 percent said they type a competitive retailer’s name in their browser. But there is a growing trend that… Read more »
0
|
0
-   Share

Sorry, I have to copy and paste what Chris Petersen wrote above:

“The bottom line is that retail metrics are outdated and just plain wrong. It’s not about how much a retailer sells online versus in stores, it is now about how a retailer can grow total sales (profitably) across all channels.”

Folks have been online shopping for the holiday since that last trick or treater went to bed. The calendar as we knew it is toast. The flow from Halloween to Veterans Day to Thanksgiving to Christmas is gone. The tyranny of retailer-controlled sales for lookalike merchandise has given way to mobility, and the consumer now decides what and when to buy. This time of austerity has trained a new generation of shoppers. And the third consecutive year of smartphone enablement has sealed the deal. Tech is now in the maw of the market, the early adopters and tech natives are deeply rooted in a new behavior. The laggards and Luddites will follow. It’s no longer about bricks or clicks. It is the brand, and those with the most frictionless and relevant experience will win. Off-price promotion is king, that’s the content that matters, for now and until we break free of the Great Recession. Is a massive infrastructure deal the only way to bring back middle-class salaries that evaporated when union manufacturing jobs went off… Read more »
0
|
0
-   Share

The growth of e-commerce is better viewed as a practical means to increase savings in the consumer search for product access and discounts. Searching the endless aisle, real or electronic, takes a lot of time with no guarantee of getting exactly what you want. This is something the consumer has figured out far ahead of the brick-and-mortar retail executives. While there may be a need to detour from the original course or destination, as in a Cyber Monday visit to e-Target, the wait to get a destination with the capability to answer a consumer need is never slow or delayed by distance, traffic or parking. Just as the traveling salesman was replaced by malls and catalogs for the sake of convenience and access, so to is brick-and-mortar seeing an exodus to the freedom(s) of e-commerce for the very same reasons. The economic indicators support a shift in suppliers as opposed to real retail growth. We will know for sure this coming April. Brick-and-mortar stores will continue to get smaller and much more specialized in the… Read more »
0
|
0
-   Share

All you have to do is look at the trend over the years, and if the trend continues, we will see bigger e-commerce transactions. Simple: It’s just more convenient. And when companies like Amazon have two hour delivery (in select cities), well, it doesn’t get much more convenient than that. I can’t get in my car, navigate the busy parking lots, push my way through the crowded malls, make my purchase, and get home in under two hours. But, that’s just Amazon. Even with shipping, consumers with just a small amount of patience are finding online transactions to be convenient enough to avoid crowded malls.

Yes, online sales are growing and will continue to do so, as people increasingly have greater confidence in the security of payment systems and the ability of merchants and shippers to execute.

However, I’d like to see a breakdown of e-commerce purchases that were done online and completed exclusively by computer or smart phone interaction — compared to those done with buyers looking at a website’s catalog of offerings but with items actually being ordered using a human on both ends communicating either via live-chat or phone. Is this info available anywhere? It seems that this data is needed and would be essential for anyone attempting to forecast the nuances (including returns) of future e-tailing yet this season and beyond.

No surprise to me. E-commerce is still rising on the bell curve. Adoption increases for many reasons including better e-tail practices and more tech savvy/oriented (younger) shoppers across the buying landscape. Barring some shock to the economy, I expect next year to outdo 2015.

Per my comments here, the season is yet to be determined.

Braintrust
"You have to wonder why many retail "pundits" were surprised by the Black Friday weekend numbers ... the consumer trends for online shopping behavior have been building for a long time."

"" ... an even bigger future ... "? That would be a pretty tough order, given that some predictions have as much as 30 percent of all shopping being online/mobile by 2020."

"For the trailing five years, e-commerce has been growing at around 15 percent year-over-year. And each year, big analyst firms predict slowly tapering growth."