Does experiential retailing play better on the Great, White Way? 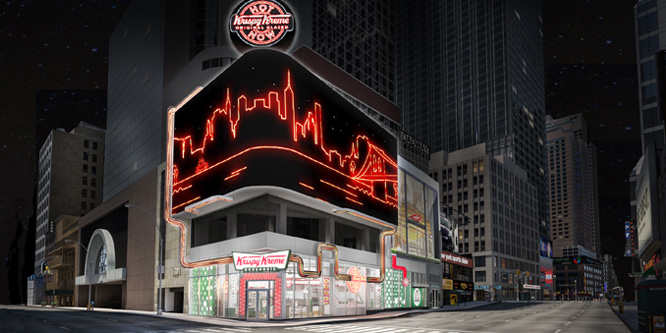 Diners will enjoy fresh donuts “in the world’s largest Krispy Kreme doughnut box with stadium-style seating.” The location will also sell exclusive merchandise that celebrates both New York City and the brand.

The store will take over space formerly occupied by Hershey’s Chocolate World, which moved into a larger space nearby. Said Michael Tattersfield, Krispy Kreme’s CEO, in a statement, “In the most iconic city in the world, the Krispy Kreme Times Square flagship will showcase our brand on the global stage and inspire customer wonder.”

Times Square hasn’t been immune to the vacancy challenges facing New York City. Rents for Times Square stores average $2,000 per square foot, down from a peak of $2,300 in 2015, according to a New York Times article from May.

But Times Square has fared better than most other corridors as it taps into the experiential trend and due to its tourist traffic. About 380,000 pedestrians walk through Times Square daily, and as many as 450,000 on the busiest days, according to Times Square Alliance.

“You have to do something that is memorable,” Andrew Essex, a consultant on the project told The New York Times. “And that’s where things get exciting.”

DISCUSSION QUESTIONS: Does the consumer desire for experiences offer more opportunities in tourist destinations such as Times Square than in other locations that do not have the same attractions? Will Krispy Kreme benefit from a Times Square flagship?

Please practice The RetailWire Golden Rule when submitting your comments.
Braintrust
"If you’re going for retail theater, then Times Square is definitely the place to do it!"

"The theater of shopping is universal. Any retailer would benefit from an experiential emersion."

"Experiential isn’t the right play in every retail environment, but Times Square is certainly the poster-child for it."

9 Comments on "Does experiential retailing play better on the Great, White Way?"

I think that this a great move for Krispy Kreme. Having worked in Times Square for years, I can attest to the fact that there are many, many, many tourists that lumber around looking for something to do after they’ve taken in the billboards and spotted the New Years Eve ball. Experiential isn’t the right play in every retail environment, but Times Square is certainly the poster-child for it.

We call it Place Marketing. Money comes out of print and broadcast and goes into a physical location. Times Square has the Cover Girl store, the M&M store and most recently the Hershey Store. What management doesn’t always understand is that so many visitors to Times Square are foreign tourists. I watched an amusing discussion as a staff member at the Hershey Store tried explain to a Chinese family what a s’more was. We also think of it as the Cathedral, Church and Chapel strategy. The Times Square Krispy Kreme Cathedral is visited by both novices and devotees of the brand.

If you’re going for retail theater, then Times Square is definitely the place to do it! The Krispy Kreme brand will no doubt benefit from the publicity alone when this store opens next year. Watching donuts being made is likely a more interesting activity to a largely tourist-laden area like Times Square. How many native New Yorkers will rush to this store?

This isn’t the type of store I imagine would work in non-urban locations that are not high-traffic. But it will be a great flagship for Krispy Kreme and I would expect them to open more of these in other cities in the future.

It doesn’t work for every brand, but this is perfect for Krispy Kreme. I have never been a sweet lover but when I was a little girl, a special treat after special events like ballet recitals was to go by Krispy Kreme and watch them make the fresh donuts then you have to eat them! The smell was what it was all about and it was an event in itself. Not an expensive one either. Great move for Krispy Kreme and my 2 cents.

Times Square is unique among tourist destinations. It’s loud, bright, and packed to the gills. Despite New Yorkers’ general hatred for the area, it’s reliably a source of delight for tourists. And unless you’ve got tickets for a Broadway show, there’s not really much specifically to do there that’s not shopping, save for Madame Tusauds and Ripley’s Believe It or Not. It makes sense that iconic brands like M&M, COVERGIRL, and now Krispie Kreme would do well by staging attention-grabbing, Instragrammable experiential retail destinations there. Tourists are kind of just there looking for something to do. And given the price tourists have already paid to get there, these retailers offer fun at a nominal cost. There are certain other tourist destinations where experiential retail can strike big–Las Vegas comes to mind, perhaps. But I’m not sure the tactic is bound for success in other tourist destinations, and these stores likely wouldn’t work in all areas of NYC.

Tourists visit Times Square expecting to be entertained. Making a splash in Times Square with its experiential store will help Krispy Kreme attract new customers and curate more cult-like fans. Consumers love the theater of shopping and this is the perfect theatre for Krispy Kreme.

The theater of shopping is universal. Any retailer would benefit from an experiential emersion. Many European retailers understand this concept, but it is a lost art in America with the exception of a few leaders like Apple and now Krispy Kreme.

The foot traffic alone makes this move a huge win. For smaller locations and areas, the experience in just watching the donuts be made is enough to win over customer loyalty.

Iconic flagship stores have come and gone in Times Square. With the diverse, international audience of the area, it’s most always worth a try for iconic brands to give it a go. Next, we need a Krispy Kreme in Northern Nevada! I miss them!

Times Square is one of the places that theater is the expectation, and if you are going to open a store there, you need to put on a show. Ultimately the product needs to deliver, but considering every store is already a little bit of theater with the production line, an outlandish version in Times Square is coherent with the brand.

Braintrust
"If you’re going for retail theater, then Times Square is definitely the place to do it!"

"The theater of shopping is universal. Any retailer would benefit from an experiential emersion."

"Experiential isn’t the right play in every retail environment, but Times Square is certainly the poster-child for it."