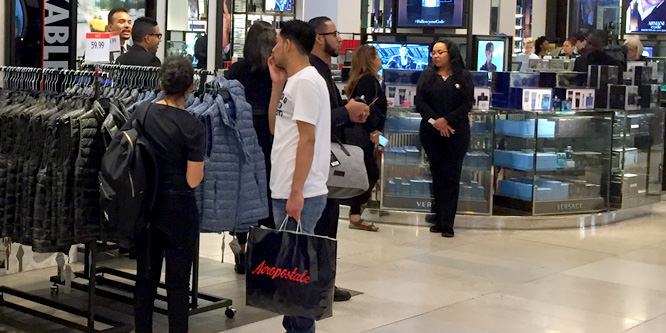 The Consumer Confidence Index (CCI) rose from 101.8 to 104.1 in September, however economists are skeptical as to whether this increase predicts actual market recuperation. After all, a contrasting study by Bloomberg shows American’s sentiment on their personal financial state dropped to 103.2 in October, the lowest it’s been since 2015. In other words, some consumers’ current fiscal state may be worrisome, but they are confident conditions will improve. As Capital Economics’ Chief U.S. Economist Paul Ashworth told The Wall Street Journal, “Confidence hasn’t been a great guide to actual consumer spending in recent years.”

Despite the uncertainties, consumers are forecast to spend for the 2017 holiday season as if the recession never happened. The National Retail Federation predicts a 3.6 percent increase in holiday spending, with online sales expected to grow between seven to 10 percent. Retailers have heard these numbers and are pouring resources into training seasonal help with expected hires estimated between 640,000 and 690,000.

Mr. Ashworth also told the Journal that consumers must be “delirious” to report higher levels of confidence in the midst of market uncertainty. Confident shoppers make more purchases, but with what revenue? The unemployment rate, while low, is at a standstill.

Credit card companies and lenders may also celebrate this season’s optimistic retail forecast. Confident consumers are more inclined to open credit accounts, which they cannot pay off until job prospects improve. In the meantime, lenders reap the interest. Perhaps this is why the Journal reports credit card debt is expected to hit $1 trillion in 2016.

Are consumers confident enough to spend money they don’t have in light of political and economic uncertainty? It is unsure whether increased consumer confidence will fiscally benefit retail stores. The numbers change monthly and best indicate consumer spending when analyzed over time. Investopedia recommends a balanced approach to interpreting CCI numbers: “The trend over several months ­— not the comparison of this month over the same month last year — is the undeniable benchmark.”

Last month’s promising CCI numbers are already dropping. Will optimistic retailers find themselves over-staffed and over-merchandised for the holidays?

DISCUSSION QUESTIONS: Do you think a higher Consumer Confidence Index foreshadows improved holiday profits for retailers? Have retailers factored this and other elements, such as the results of the U.S. presidential election, into their staffing, marketing and merchandising plans for the holidays?

Please practice The RetailWire Golden Rule when submitting your comments.
Braintrust
"There is nothing in the sales trends so far this year pointing to a huge comeback."

"Consumer spending will be a lagging indicator of better economic times."

"I would say that this holiday will be flat to down for footfall, with online continuing to be the beacon of growth."

8 Comments on "Does increased consumer confidence translate to retail profits?"

I question whether a slight increase in consumer confidence will translate into significantly increased sales this holiday season. Too many Americans are still feeling the effects of the Great Recession, and while middle class wages have started to inch upwards, too many people are underemployed versus 2007.

Consumer confidence measures are rising, along with the GDP, but the rosy forecasts for fourth quarter sales still feel high. General merchandisers are likely to benefit from soft comparisons and colder weather than last year, but there is nothing in the sales trends so far this year pointing to a huge comeback. There also isn’t much evidence of a big merchandise idea or key item likely to drive customers to stores.

Without tipping my hand, I also believe that next Tuesday’s election results could provide a “relief rally” by providing some closure one way or the other. Of course, I said the same thing before the 2000 election …

The answer is in history. More consumer confidence equates to more spending. That said, with the election coming up, there may be a pause as the country gets comfortable with the new leadership, as there is much uncertainty as to who will be elected and what the reaction will be. Consumer spending will be a lagging indicator of better economic times.

I always understood consumer confidence to be a lagging indicator. I’m not sure about what it tells us from a forward-looking perspective. The S&P has been trending down for the last three months, which is more of a leading indicator. I would say that this holiday will be flat to down for footfall, with online continuing to be the beacon of growth.

“What goes up, must come down.” Retailers who figure out how to extract value out of the inefficiencies in the system and turn that value into increased purchase power for their consumers will weather environmental factors better than others. As an example, Walmart attacked supply-chain inefficiencies and turned that value into lower prices (increased purchase power) for consumers. There is still a lot of value like that — especially in the marketing/ad tech ecosystem — that can be used the same way but only a handful of retailers are capturing it effectively.

Top-line/sales versus bottom-line/profit. Let’s focus on top-line — bottom-line gets into too many operational considerations. Many stores decomped in September. That said, the rising CCI is what supports the current consensus of around a 3.5 percent lift for November plus December sales. That is an average of all retail. Some stores are trending positively and some are not. Those that are will comp, those that aren’t likely will decomp. This year, there are two extra shopping days between Thanksgiving Day and Christmas which will help. All retailers build their budget around top-line expectations. Adjustable costs (markdowns, payroll, marketing) are all budgeted according to projected top-line. Those have to be properly managed over the nine weeks of holiday or Q4 earnings will become a problem and January will be harsh. The economic headwinds often discussed here remain in place. They are regional and affect various tiers and categories at retail. Some brands will comp and some won’t. Those offering the best value will win. The challenge is to define “value” in terms of markdowns, payroll and… Read more »
2
|
0
-   Share

The impending election notwithstanding, I feel overall U.S. retail holiday revenue will most likely not spike due to increased consumer confidence so much as there still is a threat of deflation somewhat. Tonnage may increase measurably, however, lower retail prices will keep sales at <2% year over year.

When the Brexit vote took place in June, consumer confidence plummeted and retail sales went up, the first time that such a phenomenon had been observed. Consumer confidence has since come back, but our own private polling shows that there is much consumer uncertainty. Given the parallel uncertainties now in the US, I would be very prudent in correlating consumer confidence to increased sales in the holiday period.

Braintrust
"There is nothing in the sales trends so far this year pointing to a huge comeback."

"Consumer spending will be a lagging indicator of better economic times."

"I would say that this holiday will be flat to down for footfall, with online continuing to be the beacon of growth."