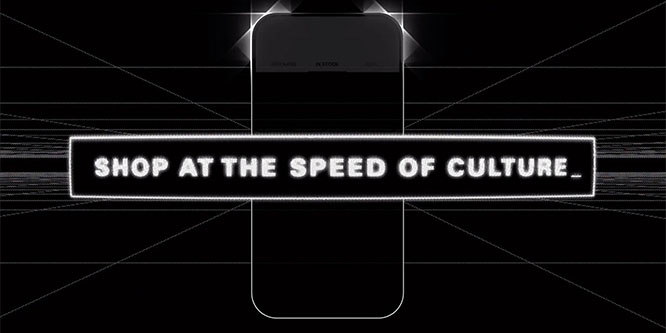 Foot Locker is investing in an online platform that hopes to shake up how sneakerheads relate to the brands they buy.

The chain announced an investment in e-commerce and content platform NTWRK, according to Hiphop Wired. NTWRK, which was founded in 2018, enables visiting site members to watch exclusive celebrity-hosted episodes of product “drops” and purchase the products featured in the content. The website has already created partnerships with big players in the sneaker/streetwear space like Puma, Jordan, Adidas and Champion.

Foot Locker has been undertaking moves to redefine itself from being a primarily mall-based retailer to an urban sneakerhead destination in recent years. The chain began opening a series of standalone physical locations called Power Stores, first globally and then in the U.S., which feature localized and lifestyle-adjacent offerings catering toward urban sneakerhead culture. More recently, it launched a digital campaign called “We Live Sneakers,” which promotes its dedication to sneakerhead culture and its exclusive relationship selling Nike’s “script swoosh” shoe design created in celebration of the iconic logo.

While Foot Locker’s success with its Power Store strategy seemed to have the chain successfully on the road to reinvention, especially as its mall-era competition like Payless began bowing out, a recent hard quarter has raised questions of what work the chain still has to do demonstrate growth while locking down sneakerhead loyalty.

Some sources, however, like on Seeking Alpha, are more positive about the recent quarter. Despite Foot Locker’s slight misses on top and bottom estimates, analysts there praised the chain’s modernization and leaning out of its operations. It identified concerns moving forward as being tied to general market malaise and the impact of tariffs rather than specific moves from the retailer. They also point out competition from Amazon.com and Nike’s direct sales as big long-term concerns.

In fact, at least one of Foot Locker’s moves has put it into direct competition, or co-opetition, with Nike. Foot Locker’s opening of a Power Store in New York City put the chain directly up against Nike’s new Manhattan flagship, an experiential location likewise meant to be a sneakerhead cultural hub.

DISCUSSION QUESTIONS What can Foot Locker hope to get back in terms of ROI from investing in the NTWRK platform? How might Foot Locker integrate the business relationship with NTWRK into its store and/or online presence?

Please practice The RetailWire Golden Rule when submitting your comments.
Braintrust
"Foot Locker continues to invest in digital-first companies and it's a very smart move."

"It’s a massive data lake that will be warehoused and filtered into Foot Locker’s physical locations."

"The biggest benefit of Foot Locker’s investment in the NTWRK e-commerce and content platform is brand image."

As the article states, this is a lot more than just e-commerce. The cultural aspects of streetwear enables Foot Locker to get closer to a younger customer whose eyeballs will be fixated on the episodes, drawings, and chat functions within the platform. It’s a massive data lake that will be warehoused and filtered into Foot Locker’s physical locations.

Foot Locker continues to invest in digital-first companies and it’s a very smart move. They are gaining customer data and insights from these other platforms that can help make better decisions for the Foot Locker brand in terms of store openings, merchandise assortment and inventory levels. NTWRK has come a long way already in the year since it has launched in terms of its own platform. It will be exciting to see how the financial investment of Foot Locker will improve the NTWRK experience in the near future.

The NTWRK platform could help Foot Locker position their assortment as status symbols. That said, if we’re talking about wooing sneakerheads, there may be more promise in Foot Locker’s recent investment in GOAT, an e-commerce platform for acquiring rare sneakers.

Investing in a dynamic digital presence and with the emergence of the NTWRK platform, Foot Locker is taking the necessary steps to remain relevant, top-of-mind and trend-focused. The lines between social media content and commerce are blurring, and the sneaker/streetwear scene is the ideal place where the arts and sciences of retail meet. This is a major power move for Foot Locker as it looks to reinvent itself for the modern era.

By focusing on the customer experience, Foot Locker is well-positioned in the digital mobile space with predictive analytics to drive the personalized, customized, and curated shopping journeys their loyal fans are looking for.

The biggest benefit of Foot Locker’s investment in the NTWRK e-commerce and content platform is brand image. Foot Locker has been on a mission to become more than a me-too athletic footwear store by appealing to hot trends in the sneakerheads’ culture.

I am sure that Foot Locker hopes the hip brand perception of NTWRK will carry over to the Foot Locker brand. This sounds like a good strategy for Foot Locker.

The best defense is a good offense. With its Sun Tzu origins, Foot Locker is proactively positioning itself to remain relevant and vital in a digital landscape. You simply cannot remain a place with shelves that show and sell shoes. Brands can, and will, create direct lines of communication and commerce with their customer communities where ever and whenever they can. Foot Locker is smartly stepping out and creating a cultural destination. They’re not waiting for their brand vendors to marginalize them. I do believe they can, and should, amplify the authenticity of their in-store experience for their shopper community as they further evolve these latest digital developments.

I also love their tag line: Shop at the speed of culture. Brilliant!

Foot Locker have been making some strong, strategic investments recently and this looks to be another one. The connection between culture and commerce has always been strong and increasingly lines are blurring when it comes to what we see and hear, what we are inspired by, who we follow and what we buy.

This investment will hopefully help Foot Locker put its name in front of sneaker fans in a different way — as a contributor to the culture rather than just someone wanting to sell them stuff. There’s not a lot of detail here about what the investment entails, but it could be interesting if Foot Locker was able to gain data about NTWRK’s viewers that it could feed into other areas of its business.

This move for Foot Locker can hopefully help them assert some dominance among the sneakerheads and gain some much needed traction. Albeit, they continue to gain footing (pun intended) and make strides (also intended) more recently with strategic positioning. As said above, brand image is going to undoubtedly be the most valuable return on their investment in this NTWRK platform move. It will be interesting to see moving forward the overall response and numbers. If there is one thing sneakerheads love, it is being able to participate in the latest drops. So, kudos to Foot Locker for this pivot and opening up an entire vast market share with a die hard following by setting its sights on the streetwear segment.

Braintrust
"Foot Locker continues to invest in digital-first companies and it's a very smart move."

"It’s a massive data lake that will be warehoused and filtered into Foot Locker’s physical locations."

"The biggest benefit of Foot Locker’s investment in the NTWRK e-commerce and content platform is brand image."