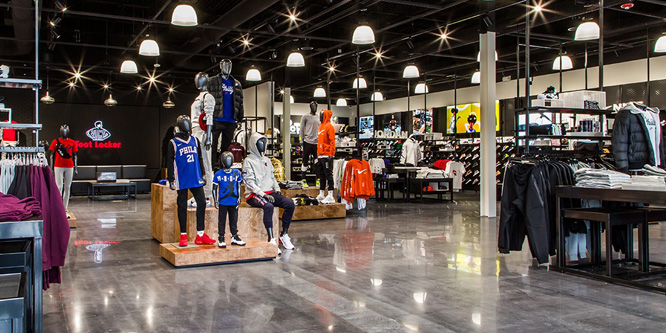 This fall, sneakerheads in New York City will have a new experiential retail spot to hang out, shop and even get a haircut.

Foot Locker will be opening its latest Power Store in Manhattan’s Washington Heights neighborhood, according to SGB Media. The Power Store features not only a barber shop, but other experiential store attractions tailored to the sneakerhead lifestyle, such areas for gaming, sneaker cleaning, sneaker customizing and an event space with its own DJ. Foot Locker currently has five Power Store locations worldwide — including U.S. locations in Detroit and Philadelphia — with plans to expand the format to more than 200 stores by 2023.

The Power Store has emerged as a central part of the Foot Locker’s turnaround, as the once mall-centric shoe retailer continues to move away from its traditional locations and into large, standalone experiential stores with a focus on urban sneaker culture.

The Power Store may be a unique addition in the other U.S. markets where the chain has opened the concept, but it won’t be the only experiential outlet for sneakerheads in New York.

Toward the end of 2018, Nike opened its hotly-anticipated flagship store in Manhattan, as reported in Fast Company. The location features six floors of sneakerhead-focused attractions, many of which integrate with the chain’s smartphone app.

The dueling stores could put Foot Locker into more direct competition with one of its best sellers.

In mid-2018, RetailWire BrainTrust member Jason Goldberg pointed to Nike as one of the first vendors to compete directly with its retail channels through opening its own storefronts in the early 1990s. He further noted that in 2018, pre-turnaround Foot Locker sales were flat while Nike made 25 percent of its profit from direct sales.

While Foot Locker seems to have developed a good understanding of its target market that it’s now putting into practice, not all mall-based shoe retailers have been so successful in managing the shift in shopping habits. Payless, despite a headline-grabbing experiential marketing campaign toward the end of 2018, announced the closure of all its stores earlier this year.

DISCUSSION QUESTIONS: What might Foot Locker have to do to make itself a unique offering for NYC sneakerheads?  Will the Foot Locker Power Store and the Nike Flagship be able to coexist amicably?

Please practice The RetailWire Golden Rule when submitting your comments.
Braintrust
"Anchored by the two flagships, sneakerheads can embark on an experiential adventure in Manhattan. It’s all good."

"Co-opetition aptly describes the relationship retailers are increasingly having with brands today – Foot Locker and Nike are good examples."

"The more experiential and immersive Foot Locker can make this experience across brands, the more successful they will become."

Co-opetition aptly describes the relationship retailers are increasingly having with brands today – Foot Locker and Nike are good examples. Ultimately this will come down to a battle of store experiences and product. Foot Locker has plenty of street cred when it comes to sneakers and their Power Store format allows it to deliver a whole new experience. The big advantage Foot Locker has is that it carries lots of brands, including Nike. There’s plenty of room in the sneakerhead market for both Nike and Foot Locker to co-exist.

Foot Locker and Nike can absolutely co-exist and could even be considered complementary. Anchored by the two flagships, sneakerheads can embark on an experiential adventure in Manhattan. It’s all good. As much buzz as small format stores receive, flagship stores have never been more relevant. They drive brand awareness and represent the full expression of a corporate brand. From there, shoppers can continue the relationship through digital or various brands’ wholesale distribution. One of my long-lasting Retail Trajectories is that “brand ubiquity is the new exclusivity.” Nike and Foot Locker are embracing this concept wholeheartedly.

Foot Locker has the advantage of being able to build experiences around multiple brands – so that in and of itself makes them unique. To be able to build experiences (and likely have them funded) with Adidas, Under Armour, Reebok and Nike will provide a draw from the NYC sneakerheads. Nike super-enthusiasts will likely remain so and stay loyal to Nike and shop at their stores. But that is a smaller percentage of people and Foot Locker can use these locations to attract the larger percentage of sneakerheads that enjoy multiple brands.

Foot Locker is experimenting with new concepts to make the brand relevant. Selling commodity products (shoes from multiple brands available at many other stores) is a difficult retail segment and differentiating your brand from the sea of competitors is the key to success. Selling in malls makes differentiation even more difficult as you are in a sea of sameness.

The Foot Locker concept store in NYC should resonate with sneakerheads and help elevate the brand image of Foot Locker.

In addition to new store concepts, Foot Locker is experimenting with many other ways to be unique and increase awareness.

Foot Locker’s “The Hunt” AR scavenger hunt inspired smartphone-toting sneakerheads to venture across Los Angeles to unlock geo-targeted AR clues throughout the city earning the chance to be among the first to acquire new limited-edition LeBron 16 King “Court Purple” sneakers.

In a commodity business, retailers need to be creative and create unique customer experiences to survive.

Foot Locker has a great opportunity with the Power Store format to leverage their multiple brands to appeal to a larger set of consumers than Nike can as a single brand. The more experiential and immersive Foot Locker can make this experience across brands, the more successful they will become.

Braintrust
"Anchored by the two flagships, sneakerheads can embark on an experiential adventure in Manhattan. It’s all good."

"Co-opetition aptly describes the relationship retailers are increasingly having with brands today – Foot Locker and Nike are good examples."

"The more experiential and immersive Foot Locker can make this experience across brands, the more successful they will become."