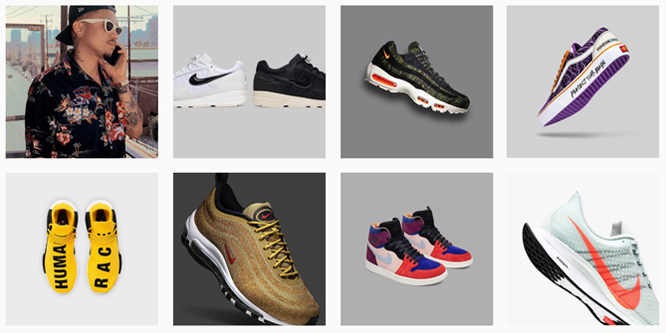 Foot Locker has made a $100 million minority investment in Goat Group, which claims to be the largest resale marketplace for sneakers.

With the new funding, GOAT has raised $197.6 million since launching in 2015 and has a valuation of $550 million, sources told Forbes. Sneaker listings on the platform have grown to 750,000 from 200,000 in the last twelve months. The Goat platform has over 35,000 unique styles available on its website and app, with some rare pairs fetching prices as high as $60,000.

A key technology is GOAT’s ship-to-verify tool that authenticates every pair of shoes it receives from sellers in order to prevent counterfeits. GOAT also has a physical presence with its acquisition last February of Flight Club, which has three stores.

Foot Locker and GOAT, according to a statement, are expected to “combine efforts” across digital and physical retail platforms. Said Eddy Lu, GOAT’s CEO, “With over 3,000 retail locations, Foot Locker will support our primarily digital presence with physical access points worldwide.”

Some wondered how GOAT could work inside Foot Locker’s locations. “Maybe Foot Locker stores will double as hubs for Goat, with kiosks where shoes can be dropped off, picked up, or authenticated,” wrote Cam Wolf for GQ. “Maybe Goat’s rare, vacuum-sealed kicks will pop up, mixed in with Foot Locker’s collection of general release sneakers.”

WIth the collaboration, Foot Locker gains access to GOAT’s authentication and other digital capabilities while extending its reach to sneakerheads. “We are constantly looking at new ways to elevate our customer experience and bring sneaker and youth culture to people around the world,” said Dick Johnson, Foot Locker’s CEO.

In an interview with Highsnobiety, NPD Group senior sports industry advisor Matt Powell said, “The sneaker resale market has been disruptive to the primary market. Foot Locker is investing in that disruption and believes that the resale market will continue to grow and its wants a piece of that growth.”

DISCUSSION QUESTIONS: Where do you see the greatest potential benefits from the partnership between Foot Locker and GOAT? Do you see re-selling becoming a major opportunity inside Foot Locker’s physical stores?

Please practice The RetailWire Golden Rule when submitting your comments.
Braintrust
"Foot Locker’s investment in GOAT is bold and sensible at the same time. "

"...when you go to buy sneakers and Foot Locker says they don’t have anymore, they know we all run to the secondary markets to get them. So why not own part of one?"

"Foot Locker’s partnership with GOAT adds to those possibilities in a credible way that consumers can trust while also tapping into the mega trend of the circular economy."

By acquiring GOAT, Foot Locker is attempting to build an ecosystem for sneaker fans. I think this move is a smart and strategic move for Foot Locker. Today, the sneaker resell market is large and growing, and I expect the combination of GOAT and Foot Locker to help create an even bigger market for resale sneakers. Just like Game Stop has been able to turn used game resales into a very sticky, strategic advantage, I think the same potential exists for Foot Locker.

Very interesting to see Foot Locker invest in a digital platform to drive interest in the secondary-goods market. The partnership between Foot Locker and GOAT represents another way for the company to engage with another selling channel, and attract additional customers to their stores. Foot Locker could potentially evolve into a cross-brand destination for these consumers by being the one-stop shop that brings together all of the popular sneaker brands.

The timing couldn’t be more ideal for Foot Locker as Nike, Adidas and other DTC brands are upping their experiential retail strategies. The resale market is heating up. In the world of luxury fashion, brands like TheRealReal and Rebag are taking off, and in the world of sneakers, GOAT and Stadium Goods are making it easier than ever for sneakerheads to get their hands on rare or secondhand shoes.

Foot Locker’s investment in GOAT is bold and sensible at the same time. It’s a perfect complement to Foot Locker’s core business as it layers novelty and sneakerhead fandom onto an increasingly commoditized category. Foot Locker is wisely hitting the ground running with the concept by leveraging its extensive physical presence to build scale. The deal is a perfect example of when integration makes more sense than discretion.

What a fresh idea (pardon the ANTI-PUN). Secondary markets, resale markets and second hand goods are becoming a trend in retail. It is a great idea, IF consumers want to buy previously worn sneakers. Presuming this market is large, then providing options for Foot Locker customers is ALWAYS a good idea. Give them choice, and get them to want to come back frequently to check out the ever changing selection.

This is a new-ish idea. If it gets a customer in the door, and they buy a re-sold item, but then buy new laces, a new insole, and a few other sports clothing items… then Foot Locker succeeds. I love retail market innovations!

This is a good move for both companies. Foot Locker gets in to a marketplace that will open potential new avenues for them. GOAT gets hooked in to the Foot Locker name. I did not realize the market for used athletic shoes. I can see both companies benefiting by establishing a charitable program where shoes can be given to needy people in underprivileged neighborhoods and countries. This could become their biggest potential marketing tool.

While I do think think this is a good investment for Foot Locker, it does make me wonder: could people stand in line at their stores for the latest new drop from Jordan or Yeezy, then turn around and re-sell them from a kiosk inside the same store at three times what they just paid Foot Locker ?

The greatest benefit to Foot Locker is the potential to elevate its brand among sneakerheads. Sneakerheads are extremely passionate and associating Foot Locker with GOAT and making their stores a location to order or pick-up their cool shoes will make them think more highly of Foot Locker. They may even pick up another standard athletic shoe, piece of apparel or accessory while they are in the store.

For GOAT, they have another $100 million to invest in their business and it gives them a distribution network of physical stores.

While I can’t personally imagine spending $500, $1,000 or more on sneakers, there is a market for these shoes and this partnership looks like a smart move for both companies.

Good move by Foot Locker. Retailers need to identify new functions for their physical stores in order to enhance productivity and performance. Foot Locker’s partnership with GOAT adds to those possibilities in a credible way that consumers can trust while also tapping into the mega trend of the circular economy.

Resale shops are hot right now, Millennials especially love them. We’re seeing resale shops like the Real Real take off, Lord & Taylor has a section selling gently used Louis Vuitton and other designer bags, so why not sneakers? People love their sneakers and they aren’t cheap. Sounds like Foot Locker is on the right track.

This is a smart move by Foot Locker. At the same time, I’m cautious about the long-term potential of GOAT.

In part, featuring the $60,000 shoe communicates “this is a collectors market” – not a place to buy shoes.

In part, used markets like this have always existed but never grown large.

Given their size, Foot Locker’s investment seems appropriate and wise. And however they implement a partnership, it should be useful to them. But I don’t expect it to be an “embracing disruption” sized activity.

This is a no-brainer decision from Foot Locker, it shows how forward-thinking they are. I don’t believe GOAT will have any presence in Foot Locker stores. The fact is, when you go to buy sneakers and Foot Locker says they don’t have anymore, they know we all run to the secondary markets to get them. So why not own part of one. Now, when you are at Foot Locker and probably online as well when they say they don’t have the shoe you want in stock anymore they will get on their phones and check to see if they can order you them or there will be a link straight to GOAT from their website! That’s how they will lock down more sales! Fantastic move Foot Locker, this is only the beginning of the resale shoe market!

I love the notion of investing in disruption rather than being its victim. I think the partnership will expand the reseller market faster and help to ensure that Foot Locker at least has the right to compete in it. As to whether or not this translates into increased in-store sales, I think the jury may still be out on that one.

At a dinner event during NRF last month, Foot Locker’s president of digital, spoke about how they recognize the way DTC brands like Nike have enjoyed great customer loyalty and engagement from supporting sneakerheads and all of their desires. He explained that their goal is to become the cross-brand destination for these consumers (both physical and digital) by being the only brand that can bring all of the popular sneaker brands together in one place for fans to enjoy! This investment certainly looks to support that strategy!

Resale, especially for unique and luxury goods, is a hot space. Smart of Foot Locker to jump on the trends with this acquisition, which I expect will bring them new customers and excitement.

Without more data it’s hard to know whether this is a good deal or not, but strategically it makes a ton of sense. While the resale market is still relatively small, it’s growing rapidly and has the potential to steal significant share from industry incumbents. And we’ve all seen what happens when established brands are afraid to compete with themselves. This acquisition allows Foot Locker to gain a strong position quickly. Hopefully they didn’t pay too much!

Braintrust
"Foot Locker’s investment in GOAT is bold and sensible at the same time. "

"...when you go to buy sneakers and Foot Locker says they don’t have anymore, they know we all run to the secondary markets to get them. So why not own part of one?"

"Foot Locker’s partnership with GOAT adds to those possibilities in a credible way that consumers can trust while also tapping into the mega trend of the circular economy."