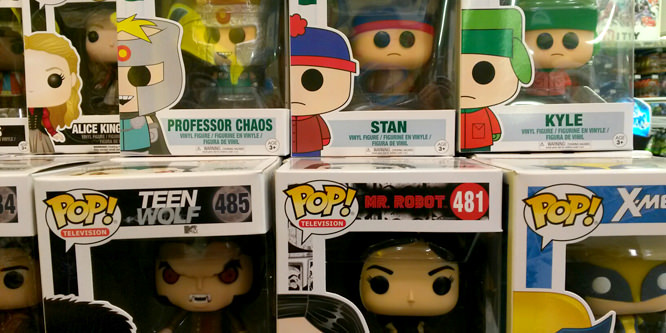 Licensed entertainment properties are big business these days. One of the most popular forms in which fans are finding their favorite characters from across the pop culture landscape is in Funko’s Pop vinyl dolls. The rapid rise to popularity of the stylized, big-headed collectibles over the past few years has inspired Funko to launch its own brick-and-mortar flagship store.

The store is on the ground floor of the company’s new headquarters, and is meant to be a destination for its loyal fan base, according to an article on Forbes. Pop collectors reportedly traveled from across the country to attend the store’s launch, lining up outside before the open. While Pop figures are generally based on licensed properties, the company occasionally releases its own limited edition original figures which will now be available exclusively at the store. Funko is also planning other features for the store, including a “Funko Factory,” where customers will create their own customized Pop figures.

Though the company asserts it has no plans to open more locations nationwide and compete with retailers that sell Pop figures, Funko’s CEO told Forbes that he has learned to “never say never.”

The experiential tactics used at Funko’s flagship are reminiscent of stores in other areas of retail. Nike, for instance, has made its Soho flagship store in Manhattan a destination for store-exclusive sneakers and offers customers advanced personalization options.

The licensed property niche has been growing rapidly, with both major toy chains and specialty shops stocking swag related to all types of TV and pop-culture phenomena. One need look no further than the success of GameStop-owned ThinkGeek. Once an online-only purveyor of the branded pop culture items they call “loot,” ThinkGeek found enough success in its 2015 brick-and-mortar pilot to pursue a nationwide expansion.

Please practice The RetailWire Golden Rule when submitting your comments.
Braintrust
"Mainstream toy retailers can learn a good deal from Funko starting with the notion of scarcity demand modeling."

"Although the entire Duck Dodgers line from Funko rests among my agency’s Telly Award statues, I consider their popularity a fad..."

"Brands like Funko need to determine what business they’re in — manufacturing, licensing, distribution, or retail."

There’s also a fine balance between keeping existing distribution channels satisfied/motivated and becoming a competitor that causes them to drop merchandise. Brands like Funko need to determine what business they’re in — manufacturing, licensing, distribution, or retail.

I agree with Ken: what business is Funko in? I would argue it’s not a retailer at heart, But it does send a wake-up signal to other retailers to get on board with creating some relevant experiences around licensed merchandise. It’s not that hard to give shoppers an opportunity to have some fun!

This one is hard to comment on. Although the entire Duck Dodgers line from Funko rests among my agency’s Telly Award statues, I consider their popularity a fad — a modern Beanie Babies.

As a result, I don’t think there’s a broad lesson to be learned here.

Their home store opened well? That’s excellent. But so did the store for collectible figure maker Kidrobot in Boulder, CO. And then they struggled as the fad shifted.

I really enjoy fads … but they are an unreliable base for future retail strength.

I wil add one lesson: None of this matters without demand for products. And somehow amid all the headlines the fundamental need to build and maintain demand for what’s in the store isn’t often discussed.

It seems that too many believe that’s a “solved” problem. Yet I constantly talk with retailers who complain about outstanding products that sit on their shelves — because no demand has been built for these products.

And that’s a communication problem — building demand. Funko built demand — very, very slowly. These figures have been around for ages. And they trickled into stores — first as novelties in small amounts … etc.

Advertising wouldn’t have worked for Funko. But there are a great many products where retailers would do well to shift budget from their slow action brand ads to advertising built deeply around product that drives immediate increases in foot traffic.

There is a store a few blocks from me that specializes in limited edition vinyl pop figures from Japan and U.S. artists such as Ron English. Oh — and yes, it does dynamite business. When “limited edition” models are introduced you can get crowds about the size of a MOMA opening. It is a large, and extremely profitable, business.

Mainstream toy retailers can learn a good deal from Funko starting with the notion of scarcity demand modeling. Limit a toy’s … er … pop culture artifact’s … run and you instantly increase demand, assuming there is a collector’s market.

As to the question of locations I think that, in this case, less is more. Scarcity is the whole key to the collector market — and the prices it drives. Too many locations spells trouble and slashed margins.

This seems more like a marketing and brand showcasing exercise than a move into serious retailing. The concept can also be used to test and try out new products and to gather customer feedback and ideas. Overall, it is a smart move by Funko.

The lesson for other retailers is to look at how brands use these spaces to create engagement and interaction. In the particular case of Toys “R” Us, it could work with Funko to apply some of the thinking from this store to the Funko offering/area in its own stores.

This looks like another iteration of the pop-up store (except that it appears to be permanent) that builds interest in a product and a brand, and helps create support among influencers. It’s a good idea and well within a trend that’s been underway for a decade and a half. They have obviously seriously engaged the core audience, the Pop collectors, and this has led to publicity and visibility. More interested customers will follow. Funko should open a few more in places like LA, Chicago and NYC.

Braintrust
"Mainstream toy retailers can learn a good deal from Funko starting with the notion of scarcity demand modeling."

"Although the entire Duck Dodgers line from Funko rests among my agency’s Telly Award statues, I consider their popularity a fad..."

"Brands like Funko need to determine what business they’re in — manufacturing, licensing, distribution, or retail."