Nike goes big with an experiential concept in Soho 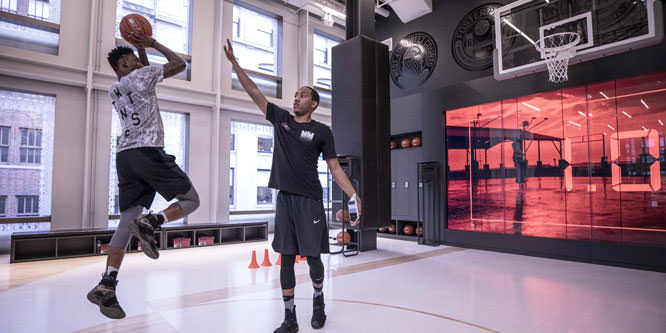 Nike is making a full-court press into experiential retail with its new store in Manhattan’s Soho neighborhood.

The five-story operation, which opened in mid-November, is home to an array of high-tech bells and whistles meant to thrill the athletic shoe shopper, as reported by The Motley Fool. The new store features technology that allows customers to personalize products with laser engraving, treadmills with sensors for evaluating running shoes and fitting rooms with a lounge-like feel. One of the more futuristic and immersive features is an in-store basketball court that senses the performance of particular products and gives customers feedback on digital on-court screens. There are also in-store experts on hand to help customers.

The article speculates on Nike planning to someday use the store as a launching pad for in-store personalized shoe production. Adidas has seen some success with its Speedfactories — production facilities capable of quickly creating more localized, customized products with a minimal amount of human labor involved.

Nike is also making rare, exclusive sneakers available at the Soho location, as reported by GQ. The store is selling a pair of sneakers created by Menswear designer John Elliot in collaboration with LeBron James. With sneakers having a huge and passionate collector base, such exclusives could turn the store into a point of pilgrimage for out-of-state and even international collectors.

Nike has also recently been extending its brick-and-mortar brand reach through other retailers. Through Foot Locker and its various sub-brands, Nike has opened up single-vendor store concepts such as Flight 23, which sells only Jordan brand products, and Nike Yardline, a football-themed concept.

Though sneakerheads are reportedly enjoying the immersive experiences and the opportunities to buy one-off products, not everyone is overjoyed with the store. In the ramp-up to the store opening, local politicians rallied against it, as reported by PIX 11, claiming that the area is already oversaturated and that the addition of a new big-draw, big-box store would threaten pedestrian safety.

Nike does some very bold marketing and advertising. This is another version of what has been working. Is it worth signing athletes to six and seven figure contracts? Yes. Is it worth investing in a showcase like the Soho experience? Yes. Many well-known brands have done this. (Restoration Hardware just built a five story showcase in Chicago — and it is magnificent.) This is all part of image, reputation, visibility and more. (I can’t wait to visit the store the next time I’m in NYC.)

Globally-recognized brands creating flagship destination locations makes for wonderful PR chatter further fueling the brand’s presence. AT&T recently, and similarly, touted their new San Francisco location. These locations become audio and video technology showcases that rival Disney World and Las Vegas casinos. They are not scalable and their influence to shoppers outside their access is minimal. In the case of Nike, the New York City Soho location will indeed draw a continual flow of out-of-town visitors not unlike their other flagship locations. Many Nike fans and collectors will be drawn to the store out of curiosity for the new experience. What, if any, of the experiences implemented in this Soho store will actually translate to any Nike experience in your local shopping experience will be years away. We’re talking about it so it makes for great retail conversation.

First this is, finally, a great experience-based idea. Nike’s inherent category is experience-oriented so it is quite smart to use a strategy like this. And quite smart to start in cities where the opportunity for experiences around Nike products are more limited.

That said, I advise caution against taking too much from this. Nike has an ideal product for an experience-based store. If you’re selling hammers and nails, that opportunity doesn’t really exist — the experiences that are close to the product aren’t consequential for retail.

As to the question about taking casual users and increasing their brand consumption, I’m skeptical. Many of the experience executions merely support the loyalty of heavy users or play a mild brand role. So I think it’s a smart choice for them, but am skeptical of it delivering substantial brand change for casual buyers. In part, many of those Nike customers are casual because Nike lacks the products they need and because consumers are naturally brand-promiscuous (to use a term suggested by Byron Sharp).

I have to ask, what’s the difference between this new take and the old “mega” flagships of the ’90s? You know, the ones they mostly closed, like Union Square in San Francisco. As described, sounds identical to the one as it opened on State Street in the late ’90s with the Jordan Court, etc.

Guess I’ll have to visit to get a sense of that. In any case, they never disappoint.

This is a great experience for the customer, full stop. Nike is not measuring success like traditional stores … it has to be about building the brand (loyalty and recognition) as well as influencing sales in other touchpoints over time. Traditionally these experiential stores are funded in large part from the marketing budget. The success of these types of stores hinges on 1) the ability for the marketing budget to support these experiences and 2) the maturity of the organization to measure success in new ways. Unfortunately the reach and influence of this store is maximized only in large urban areas, so the model is not likely to scale. I consider it part of the experience “tool kit.”

The origin story of this store goes back to Nike+ and the Fuel Band. Since notably exiting the hardware side of fitness tracking a couple of years ago, Nike has redesigned Nike+ as a digital and service-based engagement program. The retail experiences at the Soho store are part of an overall direct to consumer strategy and are designed to complement the revamped suite of Nike apps and the recently released Apple Watch Nike+. As the number of 3rd party doors (Sports Authority etc.) declines, this robust direct to consumer strategy is key to Nike’s future growth.

Athletes, running enthusiasts, bikers are just that — enthusiasts. They will surely go there and love it. Remember this is one of the categories that is more than embracing wearables. They will love trying out new features in the store. Anything that reinforces their efforts to better themselves or perform their favorite sport. And yes, some of it is about clout.

Nike, IMHO, has some very loyal customers and this will likely bring more into the fold. As for other brands and other areas that might benefit from experiential offerings? Remember I am a customer experience advocate so it goes without saying, most all of them should be putting on their experiential hats. It can be a game changer!