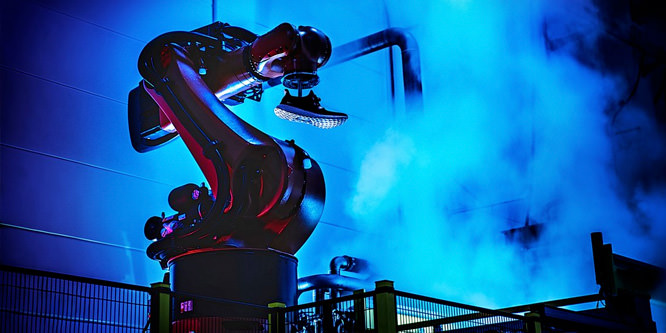 Adidas is bringing a portion of its shoe production to the U.S., but the factory won’t resemble the company’s sometimes controversial operations in Asia. Adidas is making its entry into U.S. manufacturing with a factory built to churn out product quickly and staffed mostly by robots. It’s a model of production that could change both the manufacturing end of footwear and how customers shop for shoes.

Adidas, a German company, piloted its first Speedfactory in Ansbach, Germany last year. At the time the Speedfactory was launched, a report in Fast Company described it as a step toward a method of production running parallel to the traditional one, focused on customization, proximity to customers and localization. Gerd Manz, vice president of technology innovation at Adidas, described a manufacturing network that could respond to localized consumer demands, foreseeing a future in which customers will be able to, for example, buy customized shoes made out of local materials.

With the announcement of the new U.S. Speedfactory, the company reiterated in an interview with Fortune that the move is not about replacing traditional production, but instead allowing retailers to order based on current trends and receive product without waiting for shipping from overseas.

A robotic factory like the Speedfactory, capable of changing the style of shoe it manufactures on a dime while still producing in large amounts, seems as though it could be foundational to a new, fast-fashion footwear model.

Adidas is starting to catch up in the race against other big-name sneaker and athletic wear manufacturers, according to another article in Fortune. Adidas announced that second-quarter sales were up 23 percent over last year. The company also experienced a double-digit increase both in the first quarter of 2016 and all of fiscal 2015.

DISCUSSION QUESTIONS: Could Adidas fundamentally alter what’s expected from shoe retailers and brands with the Speedfactory? What impact could such a fast-producing, localized model have on the way shoes and other apparel are marketed?

Please practice The RetailWire Golden Rule when submitting your comments.
Braintrust
"Bringing production closer to where the demand is should alter many dimensions of retail logistics."

"Customization, quality control and speed to market are all byproducts of this process which can help Adidas gain market share."

"Speed and agility are two sides of the success coin that companies are looking to mint today."

Bringing production closer to where the demand is should alter many dimensions of retail logistics such as smaller order sizes and more flexible demand-response.

A more interesting question perhaps is what would happen to demand in a society where so many jobs are automated (including retail jobs). Income inequality is already an issue, and large-scale automation of jobs may further destroy consumer demand if a new social contract is not implemented. Retailers should prepare for such an eventuality.

Look out feet — Adidas is on the crank up. Shoes are the start, but their rapid adoption of the latest technology will impact the global shoe market and in the future other sportswear areas. It is all about the data and knowledge of what their resellers and actual shoppers want, and leveraging technology to meet the demands.

This could be a very profitable leap for this company in growing their shoe market in the U.S. Customization, quality control and speed to market are all byproducts of this process which can help Adidas gain market share. They should strike quickly if they don’t want to be usurped by Nike.

In an industry such as athletic shoes, where people take their shoes very personally, this could be a game changer. On the other hand, customized and local bring to my mind big dollar signs and, of course, it will be all about the marketing.

If they can make it work without incurring huge expense, then look out Nike and other such brands.

Speed and agility are two sides of the success coin that companies are looking to mint today.

As companies use Big Data and predictive insights to tap into consumer trends, being agile becomes key in their ability to leverage these insights as is the speed to scale and execute on these insights.

This is a winning move by Adidas. The company’s “Speedfactory” provides both agility and speed for the company to respond to local market conditions and delight both the retailer and consumer with the right products at the right stores ahead of other competitors.

Think of these types of robot-staffed factories as supplementing and not replacing the mass production of core styles. The Speedfactories meet incremental, emerging consumer demands based on local conditions. It’s a viable and effective two-prong approach to keeping production costs low while slashing delivery time and keeping the products in sync with market demands. Others will pay close attention to how well Adidas executes, but I expect that they’ve already bought into the concept.

People are unique and like to customize things. At the same time, there is a lack of patience for anything, including customization. So to the extent that this can deliver a customized solution more quickly and closer to the customer, it’s a win!

Customization in the athletic footwear category is nothing new and something that’s long been embraced by the category leader, Nike and its sibling, Converse. While this is an interesting step — no pun intended — and an interesting location (for me, being based in Atlanta), Adidas is lagging behind Nike and Under Armour in terms of momentum and category leadership, so it’s at least good in terms of PR but falls short, especially given the volume, of making up some key gaps. All you have to do is walk into one of the Adidas doors to see the contrast.

The Adidas Speedfactory highlights the moves that footwear and apparel companies are making to implement agile, rapid and highly responsive sourcing models.

However, the vast majority of footwear and apparel production still occurs through global sourcing, and most companies still need to focus on significantly reducing lead times and streamlining processes in their global supply chains.

There’s still a long way to go to add flexibility and agility to supply chain processes in order to optimize lead times and be more responsive to consumers.

Braintrust
"Bringing production closer to where the demand is should alter many dimensions of retail logistics."

"Customization, quality control and speed to market are all byproducts of this process which can help Adidas gain market share."

"Speed and agility are two sides of the success coin that companies are looking to mint today."