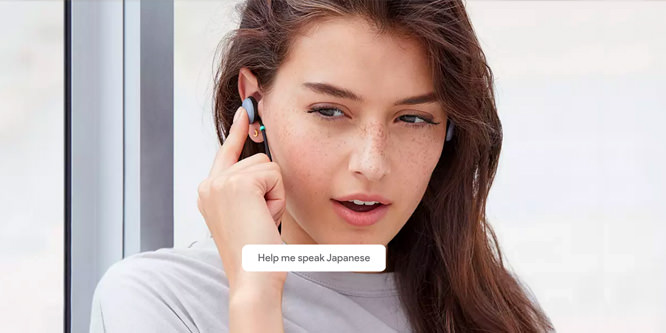 If only Joey Vento had lived to see the day.

The former owner of Geno’s Steaks, one of Philadelphia’s most famous places for cheesesteak, placed a sign in his store in 2008 that read, “This is America: When Ordering ‘Please Speak English.’”

Mr. Vento, who said he had never refused to serve anyone who didn’t speak English, put the sign up to address the large numbers of immigrants — primarily Hispanics and Asians — who were moving into the area around Geno’s at the time. While the sign remained up until 2016, a father’s last wish that Mr. Vento’s son honored after his death in 2011, today there would be little need for it if press reports about Google’s Pixel Buds are true

Google’s new product, as Engadget reports, is right out of Douglas Adam’s “The Hitchhiker’s Guide to Galaxy” trilogy. In the books, characters insert a device knows as a Babel Fish into their ear canals and are thereby able to instantly translate what others are saying regardless of the language spoken. Google’s wireless Pixel Buds offer instant translations between 40 different languages.

Pixel Buds wearers are able to activate real-time translations by holding the right earbud and saying, “Help me speak” whatever language they need. The translation is played out loud via the user’s Google Pixel 2 smartphone for others to hear. The device then translates replies back into the earbuds. According to Engadget, “there appeared to be virtually zero lag time during the translation,” during Google’s demonstration of the new product.

Google Pixel Buds are priced at $159.

DISCUSSION QUESTIONS: How might real-time translation technology affect communication in the years ahead? What effects will it have on retail businesses, not only with customers, but between members of the workforce?

Please practice The RetailWire Golden Rule when submitting your comments.
Braintrust
" We are a long way from Star Trek’s Universal Translator, but this is a giant first step."

"The implications for global trading is also immense — now if Google could build us a teleporter!"

"Another great tech tool designed to dumb down the citizenry. Why bother to learn another language? Too much trouble."

This is a great idea. The only drawback is that it currently only works with a Pixel phone.

This is not only something every tourist would want but something the will be a great help in many workplaces.

We just returned from working with a client who owns a sugar refinery. They hire hundreds of workers from Central America and Mexico during the grind/harvest season. All the menus and many of the signs in their store/restaurant are bilingual. In addition, they use an app on their cell phones to translate. This would make both their workers and their staff’s life much easier.

I see Pixel Buds as a “must have” in today’s world. Today we are a global economy and the need to understand different languages is enormous. We are a long way from Star Trek’s Universal Translator, but this is a giant first step. I often find it frustrating when I’m with someone who does not speak English, and we cannot communicate. So kudos to Google for introducing Pixel Buds and I see this as a product that will sell well and provide a robust service.

The world has been waiting for this, for certain. If it works well, it will change lives. Seriously.

The future is here. If this actually works and the experience is not broken by latency or in the translating of linguistic nuances then this could have huge implications for retail. Particularly those areas/cities where there is a concentration of tourists and people on holiday. The implications for global trading is also immense — now if Google could build us a teleporter!

Another great tech tool designed to dumb down the citizenry. Why bother to learn another language? Too much trouble. Have the latest “innovation” do the work. Si puede leer esto, felicidades. No necesitas una maquina.

Translation: If you can read this, congratulations. You do not need a machine.

John, I have to admit I used Google to do so.

It has potential, certainly. And as one who uses various translator “engines” to deal in international transactions, I can say that they’re not just useful but allow things to occur which otherwise would not.

But yes (there’s always a “but”) I also know the problems, particularly the need to simplify things to an almost childlike level (I couldn’t — or wouldn’t want to — imagine negotiating a complex contract this way). And what of “languages” that do much of their communicating with gestures and idioms? “Hymie” from “Get Smart” comes to mind.

Real-time translation technology will be imperative for communication in the retail space both internally and customer facing. Retailers will benefit in the following ways: creating an inclusive workforce, allowing expansion, improved safety, and faster and comprehensive information sharing. Workplace diversity is something to be celebrated and contributes to global expansion efforts by making non-English speaking employees and customers feel at ease. If your staff speaks a multitude of languages, you’ll have more avenues in which to communicate with customers from all over the world.  When it comes to safety, the entire company must be on the same page and nothing should get lost in translation when distributing critical information both internally and externally. Some miscommunication risks may be minor (like misunderstanding a cleaning schedule), but many risks are much more serious. Problems arise when workers are not able to communicate hazardous working conditions or cannot fully understand safety protocol. Employees should be able to read as much content in their preferred language as possible for maximum comprehension. With an effective real-time translation technology in place, you… Read more »
1
|
0
-   Share

Real-time translation is one of those sci-fi type innovations come to life. I think there’s a huge amount of scope for this tech, but at the same time I’m not sure it’ll be able to deal with complex nuance in the same way as a human translator. That said for most customer/tourist needs I’m sure it’ll prove a very helpful tool!

It is a must but it will lack the cultural part that is necessary when dealing with customers. You want to fully understand their behavior, not just their words.

I love the idea of being able to speak and understand 40 languages instantly. I’m sure this is just the beginning of a very powerful tool that will not only engage more customers but also facilitate dialogue between employees of companies that work in multiple countries. A few months ago, when Skype launched the instant translating service for messaging and calls, I decided to test it myself and see if it worked as well as expected. It really did. If Google’s earbuds work just as well or better, it’s going to be a disruptive and effective tool to break down the dreaded language barriers.

Braintrust
" We are a long way from Star Trek’s Universal Translator, but this is a giant first step."

"The implications for global trading is also immense — now if Google could build us a teleporter!"

"Another great tech tool designed to dumb down the citizenry. Why bother to learn another language? Too much trouble."