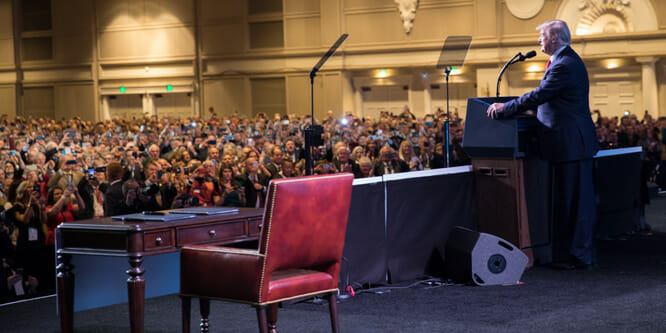 The Trump administration has unveiled its plan to reform and cut the Supplemental Nutrition Assistance Program (SNAP) and it has grocers wondering why the president would want to blow up a well-run government program.

SNAP recipients, who receive more than $90 a month in benefits, would under the proposed plan get a preset box of foods and beverages including cereals, canned fruits and vegetables, canned meat, juice, pasta, peanut butter and shelf-stable milk. Recipients would be required to use their existing benefits to pay for the boxes with whatever remains being put on their EBT cards.

With the current system, recipients have their full benefits loaded onto cards and are able to make purchases on a wide variety of foods and beverages in dollar stores, supermarkets and other SNAP designated retail outlets selling groceries.

“FMI (Food Marketing Institute) and our members have worked with the House and Senate Agriculture Committees and the USDA over several decades to achieve a national system, utilizing existing commercial infrastructure and technology to achieve the greatest efficiency, availability and lowest cost,” said Jennifer Hatcher, chief public policy officer at FMI, in a statement. “As we understand the proposal in the president’s budget to create a USDA commodity foods box of staples, each of these achievements would be lost.”

“SNAP is one of the most efficient federal social safety net programs because retailers are the linchpin of a successful public-private partnership,” said Greg Ferrara, EVP of advocacy, public relations and member services at NGA. “Fierce competition in the food retail industry drives consumer prices down, therefore benefiting those on a limited food budget more than anyone. NGA is extremely concerned with the president’s budget proposal, as it abandons the proven free-market model on the ill-advised assumption that the government can purchase and provide food more efficiently than its current private sector partners.”

Dollar store stocks were hard hit on news of the Trump administration’s proposals, Bloomberg reported. Both Dollar General and Dollar Tree saw their share prices decline on Monday. SNAP transactions make up roughly five percent of dollar store sales, according to according to Chuck Grom, an analyst at Gordon Haskett Research Advisors.

DISCUSSION QUESTIONS: Do you support or oppose the proposed changes to the SNAP program made by the Trump administration? If enacted, how would you see the changes affecting grocery retailers?

Please practice The RetailWire Golden Rule when submitting your comments.
Braintrust
"There is something real about the cultural desire to be 'shopping the marketplace' in your community that can never be matched by a box."

"People having no idea what people needing this program need, are deciding what they need. It will not work."

"Of course retailers hate this idea. What could they possibly like? A majority of SNAP benefits will be taken out of their revenues."

Of course retailers hate this idea. What could they possibly like? A majority of SNAP benefits will be taken out of their revenues. Today they not only can compete for those dollars — they can also trade them up to higher margin items or brands for at least a part of the dollars. Last but not least, SNAP customers typically don’t just spend EBT card dollars in the store. They also spend their own money for items not approved for SNAP. Retailers have to worry whether those customers will visit their stores as often if the bulk of their needs are delivered to their door. (I think they will by the way. No one willingly gives up their discretionary purchases.)

In my opinion, whether or not the program deserves our support as citizens/voters/taxpayers is best decided at the ballot box and debated in other forums.

Yet another well-run program that the Trump administration is trying to undermine when it does not need fixing. Can you imagine being a family that had been used to buying what they want with the limited funds they have and now having to deal with boxed meals? Hopefully the adults in the room will prevent this from being enacted, but if it is, my gut tells me that the cost to taxpayers will go up, not down, as there will have to be an entire infrastructure built around the assembly, packaging and distribution of these meals, not to mention the increase in garbage in landfills. The FMI, the GMA and all Americans that are currently enrolled in the SNAP program must get involved now to prevent this from happening.

This idea is really flawed. Shoppers on SNAP deserve the same right to make personal choices in the grocery store, despite the fact that they won’t always make the best choices (just like the rest of us on any given day). In addition, grocers deserve the foot traffic and the opportunity to sell fresh produce, which of course is a healthier option in any diet.

Furthermore, food subscription “boxes” are truly not the way most people want to obtain their food. There is something real about the cultural desire to be “shopping the marketplace” in your community that can never be matched by a box.

FIrst, let’s look at some facts. As evidenced by this week’s budget proposal, the Administration is no friend of any entitlement program and plans on giving “a haircut” to all “social welfare” programs from Medicaid to food stamps. The intent would appear to be — please no partisan wrangling here — to generally make it less attractive to recipients to stay on these programs if they have any way off of them. So from the President’s point of view this proposal makes a certain degree of primitive pragmatic sense. Take away the perceived “carrot” — perceived because I don’t know about you, but I wouldn’t want to feed my family off a SNAP budget — and folks will go out and work instead of living on public benefits. But out here in the real world the proposal threatens to hurt recipients in several ways, not the least of which is taking away food choice. Recipients would be stuck with what they get — regardless of allergies, ethnic eating patterns, special needs diets, etc. The counter-argument… Read more »
9
|
-1
-   Share

As others have pointed out, there are economic risks (to retailers) and “bad execution” risks to this proposal, which would undermine a safety net program considered to be well-run today. For example: Does the proposal consider how meal kits are supposed to be delivered to the homeless? Who assembles the meal kits and who makes the choices about what goes into them? Seems to me that the same vocal opponents of government overreach when it comes to school lunches ought to be consistent about not dictating food choices to SNAP recipients.

Imagine being forced to get jars of peanut butter or containers of juice when you are allergic to peanut butter and juice. The assumption that everyone is the same and can eat the same food is flawed. Changing a program to something unworkable is a bad idea.

While the intentions of the proposed changes to the SNAP program are sound — to help encourage healthy food choices for low-income people — the plan has some serious flaws. Beyond the concerns for how it will impact the revenues of grocers and dollar stores, it limits the ability for consumers to make independent choices and I am certain that the “value and quantity” of food that recipients receive will be significantly less.

From a choice perspective, a one-size-fits-all approach does not make sense. Some consumers have allergies or dietary restrictions that make products like peanut butter a poor food choice. And from a value and quantity perspective, the government is not an experienced food retailer and does not have the efficiency of grocery chains. As with any government agency, they are not as cost effective as the private sector and it will impact the cost of the products recipients receive and the net impact will be less food for the poor. This is not good for retailers or our citizens.

I commend the stated idea of trying to get more healthy food to people, but this idea fails on many basic levels.

1) The reduction of choices will create a customer service headache. Food is so personal. 2) I am not sure this solves a problem that needs solving. 3) Have the people who have looked into this even considered shipping costs into the equation? Take a look at Amazon’s profit margin on its core business of retail and tell me that the government is going to be more efficient than Amazon.

Grocery delivery is a complex business that runs on logistics, planning, and a well run workforce.

From what I have experienced so far with Blue Apron, Hello Fresh, and other private companies it appears they are still fine-tuning their value offering (selection process, packaging, delivery).

Before the government can start delivering to 20,798,956 homes a cycle, there’s a lot to figure out in the proposed plan as mentioned above and it will be essential for SNAP participants/neighborhood grocers to share their opinions with their representatives to make sure the program continues to successfully aid those in need of healthy, nutritious meals.

Most everything that can be said has already been said. I am opposed to this. I don’t understand why something that does not need fixing is going to be scrubbed for something less acceptable. But then again, I don’t understand why many things are being done by this administration. People having no idea what people needing this program need, are deciding what they need. It will not work.

I suppose many will oppose this simply because the (current) administration proposed it — and sadly they often end up right — but without going into the details, it sounds like a potentially good idea that could be subject to a lot of abuse (politically favored companies’ products making into the box to the exclusion of value or quality).

Of course it’s no secret that many Republicans have always wanted to get rid of the program, and emasculating it would be an easy first step. Grocers are at the opposite end of the spectrum, self-interest wise, so I’m waiting for a (hopefully neutral and informed) third party to weigh in.

What is the point? Inflict more pain on the poor or people having a hard time due to job loss, medical bills, other hardships. What about single moms feeding kids? The same kids who are so poor they have to eat subsidized school lunches of more boxed and canned food. Sure there are people who “game” food stamps, but what percent, who knows? Who cares? Yes, grocery retailers will suffer too, dramatically for the dollar stores.

I guess we should not be surprised living in a country where health insurance costs more than the average American can afford. So let’s knock another leg out from under the stool and “let them eat cake.”

The majority of people relying on the SNAP program are those who work retail. Not only is this going to change the amount of customers coming into the stores, it is also going to change many of the employees’ lives. The change to the program is going to create far reaching issues in retail, from promotions to foot traffic. In my opinion, a very short-sighted approach to fixing what is not a very large issue concerning the deficit.

Braintrust
"There is something real about the cultural desire to be 'shopping the marketplace' in your community that can never be matched by a box."

"People having no idea what people needing this program need, are deciding what they need. It will not work."

"Of course retailers hate this idea. What could they possibly like? A majority of SNAP benefits will be taken out of their revenues."