Has CVS gone too far with its health kick? 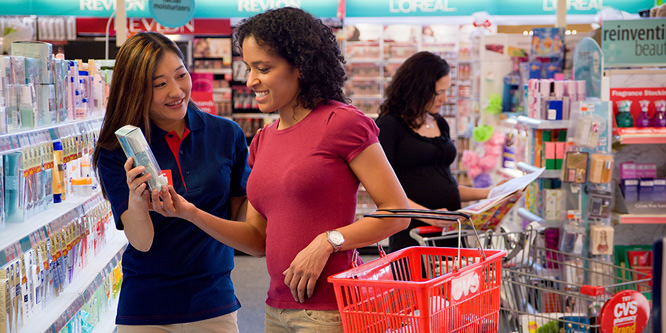 Three years after removing tobacco and the sales that go with it from its stores, CVS continues to make changes at its pharmacies intended to reinforce its strategic focus on health. The latest steps, according to a Wall Street Journal report, involve repositioning the candy aisle within its stores, delisting sunscreen products with SPF numbers below 15, and delisting foods that contain artificial trans-fats.

In April, Judy Sansone, chief merchant at CVS, said the remodels were being driven by the chain’s research, which found consumers are “taking a more proactive approach to staying well.”

To date, CVS has remodeled four stores, according to the Journal’s reporting. It plans to have “several hundred” out of 9,700 complete by 2018.

Same-store sales at CVS pharmacies fell 4.7 percent in the first quarter as the drugstore chain sold more generics and filled fewer prescriptions overall. Front-end sales at stores open for more than a year declined 4.9 percent during the same period.

When CVS made the decision to get out of the tobacco retailing business in 2014, management predicted that the company would to take a $2 billion hit. At the time, CEO Larry Merlo said the chain had made the decision because “the sale of tobacco products is inconsistent with our purpose.”

Research released in 2015 by CVS found its anti-tobacco efforts had some positive effects as cigarette smoking decreased slightly in states where it operated. The company also reported an increase in the sale of nicotine patches while the number of visits to its in-store clinics for smoking cessation nearly doubled.

Rival Walgreens has continued selling tobacco products despite pressure from health advocates to follow the lead of CVS. Walgreens announced this morning that it was no longer pursuing its acquisition of Rite Aid. Instead, it has offered $5.2 billion to buy nearly 2,200 stores and other assets from Rite Aid.

DISCUSSION QUESTIONS: In retrospect, do you think CVS made the right decision to eliminate the sale of tobacco products in its stores? Is CVS on the right track with its continued emphasis on health merchandising and marketing?

Please practice The RetailWire Golden Rule when submitting your comments.
Braintrust
"If CVS intends on being a health and wellness-focused brand then they need to rethink the entire store."

"PLUS, think of their competition. What do they stand for? Cigarettes, booze, Slurpees and the occasional flagship store?"

"CVS has put away the shotguns and picked up the rifles, focusing on an area of greater concern, as the Baby Boomers yearn to live forever..."

17 Comments on "Has CVS gone too far with its health kick?"

Absolutely. This was a long-term strategy that will eventually pay off. Before, the CVS brand meant nothing. Now it at least stands for something. The world of large drug stores is void of meaning, which is why location becomes so overly important. There’s no other reason to choose. At least CVS have given consumers a reason to choose.

As retailers continue to look for a market they can dominate, I can see CVS focusing on health-minded customers as a good idea. They will lose customers when customers can’t find the products they want. However, those “health-minded” customers may choose CVS and, as the health-minded customer market increases, in time CVS may find they have more customers turning their merchandise decisions into a profitable business. There is too much sameness today with many retailers. If CVS can build an audience for their brand because of their focus on healthy products, that could give them a leg up on their competitors.

I’m going to disagree with Tom Dougherty — CVS is a drug store just like Walgreens and Rite Aid, except it doesn’t sell tobacco products. It is hardly a bastion of health, with candy, cookies and salty snacks in the first couple of aisles in the store. If they want to be the healthy place, they need to fully commit.

Totally agree, Stephen, well said. There is no such thing as partial commitment. If CVS is intent on being purpose-driven, then drive! Higher purpose + efficient process = sustainable profitability.

The comp-sales problem at CVS seems unrelated to their decision three years ago to drop tobacco products. It was the right decision then, and the “healthy” brand positioning makes sense. CVS is not operating in a vacuum, but is competing against Walgreens — which seems at times more interested in being the neighborhood c-store than in selling health-related products.

The trick now for CVS is to build on its tactical steps and brand equity to grow its top-line sales.

There is no question that removing tobacco products from the stores was the correct thing to do. You cannot have a message of health and sell something that is a known carcinogen. I think the big question today is what role the drugstore plays in the retail landscape. Before we can understand if this is the correct path, we need to know where they intend to go. If CVS intends on being a health and wellness-focused brand then they need to rethink the entire store.

CVS is definitely on the right track. What strategic avenue is there that is better than human health? Sure, the category is broad, but if it helps you make bold decisions like getting rid of tobacco it’s absolutely working. Plus, “health” includes so many key factors that are important to all consumers now; fitness, healthy eating/living, health care, urgent care, pharmacy and on and on. This is the best thing CVS ever did in my opinion.

PLUS, think of their competition. What do they stand for? Cigarettes, booze, Slurpees and the occasional flagship store? As they say in sports, no contest.

CVS has taken a strong position to be seen as the place for health. However other than cigarettes, Walgreens sells the same items. CVS was the first drug store that placed a large emphasis on c-store type items because they drove traffic and margins. The movement of the same items to less convenient locations within the store doesn’t change the mix of items the store carries but it may change the mix of items it sells.

Walgreens was late in adopting that positioning but has continued to hone it to drive traffic and sales as the prescription business continues to move to home delivery options. If this trend continues it will impact CVS sales and their bottom line.

While CVS took a hit on eliminating tobacco product sales, it definitely highlighted a major strategic shift. CVS has put away the shotguns and picked up the rifles, focusing on an area of greater concern, particularly as the Baby Boomers yearn to live forever. This may take a while to develop sufficient scale and traction but the company is certainly on the right road for success.

My first reaction was to wonder what exactly is meant by a health “kick.” That sort of implies that health is a passing fad or some sort of secret pleasure. Doesn’t “health” pretty well equate to “life?” “Kick” is usually used in phrases like “Kick the bucket.” So when CVS stops selling stuff known to kill 480,000 annually in the U.S. alone — one out of every five deaths with an annual cost of $300 BILLION — why is there a debate at all about that decision? Was that merely part of a health kick? The truth is we have very little idea what we’re doing to our bodies with the application of topicals and the consumption of everything else. So here we have a major retailer telling us they are going to do this research for us and let us know what is not harmful (if not healthy) for us to buy. 25 percent of school kids don’t drink pure water on a daily basis — but drinks loaded with sugar pretty well all… Read more »
2
|
0
-   Share

We are in the age of holistic and healthy living and it’s the right time for CVS to make this pivotal move towards this trend. I do agree that it will require a store-wide transformation and rebranding in order to change consumer perceptions.

Beyond that, CVS will need to focus on curating assortments that are centered around organic, chemical-free, paraben-free ingredients, which would change their branding and price points but most importantly would provide their consumers the option to choose prestige products.

There’s a thin line between “helpful” and “officious.” The tobacco move was the proverbial “no-brainer,” at least as far as public acceptance, but IIRC a few people pointed out that the idea (of “pushing” a health agenda) could be carried to the point of absurdity. The trans-fat and — more particularly — candy moves suggest that perhaps that concern has merit, as each restriction gives support to further ones, catering — one might say pandering — to vocal, but ever smaller “anti” groups. At least that’s one way of looking at it … though hopefully not the one that materializes.

Yes, if you are establishing a brand that is around health and well being, removing tobacco is the right thing to do. It would be like Whole Foods selling tobacco. The results to the bottom line remains to be seen as hopefully they draw new customers in while losing the “sin goods” business.

The contrasts and similarities between CVS and Walgreens are incredibly interesting. They are both pursuing strategies more closely aligned to wellness, but taking very different strategies, both in terms of merchandising and customer marketing.

CVS removed tobacco and is doing moves with its merchandise (i.e., candy in the center of the store vs. the perimeter) but still employing a totally transactional approach to “loyalty marketing.” Its loyalty strategy is focused on discounts whereas Walgreens, which hasn’t made drastic changes in its merchandise mix (i.e., they haven’t removed tobacco), pursues a customer marketing strategy aligned with wellness.

So which one has a better brand story and overall customer experience? Compare their stock charts for the answer and it’s quite clear.

CVS has made good choices in pursuing a healthy image. However, if they’re going to commit to this approach, having a few hundred stores out of 9700 remodeled by 2018 isn’t quick enough.They need to complete their “healthy” transformation at a faster pace if they really want their brand to stand for something. Otherwise, it’s only an anecdote, and they won’t give customers a reason to choose CVS over Walgreens other than for location.

There is a great deal of opportunity for CVS to capture a larger audience of health-minded consumers.

Braintrust
"If CVS intends on being a health and wellness-focused brand then they need to rethink the entire store."

"PLUS, think of their competition. What do they stand for? Cigarettes, booze, Slurpees and the occasional flagship store?"

"CVS has put away the shotguns and picked up the rifles, focusing on an area of greater concern, as the Baby Boomers yearn to live forever..."