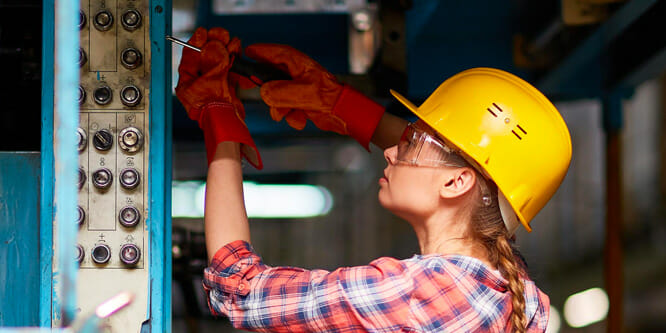 Home Depot says it will invest $50 million to train 20,000 tradespeople over the next 10 years in order to fill a growing shortage of construction and other trade workers.

According to the Bureau of Labor Statistics, 158,000 construction sector jobs in the U.S. are currently unfilled — a number expected to climb significantly as tradespeople retire over the next decade. The ratio of construction job openings to hires, as measured by the Department of Labor, is at its highest level since 2007.

Home Depot estimates sales to plumbers and other tradespeople make up about 40 percent of the company’s revenue.

“It’s important that we support the trades,” Home Depot CEO Craig Menear told USA Today. “Not only do we sell product to professionals like plumbers and electricians,” but the company also partners with services that install kitchen flooring, hot water heaters and other equipment in households.

The commitment builds on a training program launched by Home Depot last year designed to help military members transition out of the service in partnership with Home Builders Institute, the industry’s education arm, at Ft. Stewart and Ft. Bragg.

The Home Depot Foundation will also be establishing an advanced level trades training program in partnership with the Construction Education Foundation of Georgia (CEFGA) for residents of Atlanta’s Westside community. Over the next 10 years, the Foundation will expand training support to include the broader veteran community as well as underserved high schools across the U.S. The Home Depot program is expected to increase the number of graduates who receive certificates by 2,000 a year for the next decade, or nearly 60 percent.

On February 28, Lowe’s announced the introduction of Track to the Trades, an internal initiative that will offer financial assistance and counseling to employees who want to pursue trade careers. The move likewise addresses the tight U.S. labor market’s impact on both construction industries, but also a lean job market at retail. Employees will receive up to $2,500 in upfront tuition funding from Lowe’s to gain a certification and serve as a pre-apprentice in a choice of a number of trade careers.

DISCUSSION QUESTIONS: What benefits do you see from Home Depot’s $50 million commitment to create trade jobs? Is this type of training aimed at potential customers applicable to other sectors of retailing?

Please practice The RetailWire Golden Rule when submitting your comments.
Braintrust
"This is smart and it should be good for society and for the individuals who receive this training."

"Not only are they helping to solve a current and future problem for the industries, they are insuring the growth of their business as well."

"We’re seeing more “retail as activist” in many areas and I would include this as an example."

Support for building trade growth by Lowe’s and Home Depot will have good PR value but I am skeptical that new trade jobs or customer loyalty will result beyond the news coverage. Perhaps we will see the store becoming a more frequently used presentation stage to increase the awareness of job potential, connect workers with employers and upgrade worker skills.

There’s a lot of value to Home Depot. On one level it is a great public relations move — supporting American workers and American industries by training the skilled tradespersons of the future, doing something for returning vets and reinvesting those tax cut dollars back into the business in ways that benefit customers. But on a deeper level, it is also good business to hedge your bets by aligning yourself with the next generation of customers. By forming a deeper alliance with individuals in the building trades, Home Depot is attempting to build relationships that, over time, will be worth far more than the company’s initial investment. I don’t know if the model extends perfectly to other areas of retailing, but it might with modification. Should Best Buy and Microcenter, for example, partner with schools — especially those without access to the latest technological tools — to teach coding for example? Guitar Center and other musical instrument retailers have offered lessons for years. Could the Williams-Sonomas of the world and lower ends of that sector… Read more »
4
|
0
-   Share

If I find a job due to training paid for by Home Depot, I’m going to be a loyal Home Depot customer for life. This is another example of companies stepping in to solve a problem in the public sector. Yes, it might be self serving, but it fills an important public need.

I don’t see any downside to this. Great PR move, but more importantly, it will actually help to facilitate their business for many years to come while helping those who are transitioning from the military or those in communities where the trades are a great step forward. Good for Home Depot. More retailers need to do this in ways that help the communities they are in to prosper. I understand there is also a shortage of truck drivers. This is another area in which retailers and/or distribution companies can do more to help themselves while helping those that want better jobs and better pay.

Home Depot, Lowe’s, Menards and other home improvement chains are in a unique position — where there is tremendous societal and company value in specific job training. It’s hard to imagine a “seamstress” program at Jo-Ann Fabrics having the potential that exists for home improvement.

This is smart and it should be good for society and for the individuals who receive this training — especially since trades training is no longer offered in most school systems.

Training for the trades has gone by the wayside in our “everybody has to go to college” public education system. But historically, that’s not so unusual. Education systems have traditionally served the purpose of the liberal arts and historians — the “thinkers” of society if you will. It is only in modern history that we added the responsibility for basic education for all to their role. But the job of actually training someone for a job other than teaching has traditionally fallen to “trade schools” or the trades themselves. At the extreme example you find medicine. Sure, you have to make it to med school, but anyone with an M.D. will tell you that the real learning starts in residency and beyond, certainly for the specialists. For the trades, that fell to proprietors and master tradesmen in the old days and then it somehow morphed into a part of secondary education — particularly in rural school systems. And many of those programs did and do a fine job. But they are fading in availability and… Read more »
3
|
0
-   Share

A terrific win/win for both Home Depot and Lowe’s. Both depend on the trades for a significant amount of business. So why not invest in the business that will certainly invest in them once they become the tradesmen and women of the future? Not only are they helping to solve a current and future problem for the industries, they are insuring the growth of their business as well. Who cares what their main reason is? The fact that they are doing something meaningful should be enough to satisfy the naysayers.

I would hope that if the limited trials are successful that the program will expand to other locations and interested employees. It might also expand to more high schools. The tuition support for employees is an incentive for people to work at the retailer and then be inclined to use that retailer in the future. This plan creates more knowledgeable employees, attracts employees interested in the business sector and has the potential of creating good customers.

Good move by Home Depot and the communities they serve. They will likely see loyal customer graduates from this program and communities will see more and more-skilled tradespeople. Kudos and my 2 cents.

I like this approach. It’s very similar to the approach Apple and other tech companies have to invest in schools & higher education to seed the market for their products for the future. It’s worth considering for other services related retail, such as commercial automotive.

There is no downside here! Great PR for Home Depot, but more importantly they are making strides in solving a problem the public sector is unable or unwilling to solve. We’re seeing more “retail as activist” in many areas and I would include this as an example. While at the same time Home Depot is training their future generation of customers, they are directly impacting the lives of current and future customers in a unique way. Some could claim this is selfishly motivated, but I’d like to think that is only part of the decision process for Home Depot. It’s a win-win all around.

It seems like a brilliant move from HD’s perspective: enormous PR and customer loyalty value for what is really a very small sum (about one-hundredth of one percent of their revenue each year).

From the trades POV, I think it’s a little more complicated. However much a drop in the bucket this may be in for HD, I would think it’s even more so in relation to what’s needed for training overall; so I could see a false sense of “mission accomplished” developing. If I were a builder, I’d also be concerned about a patronage relationship developing: customer loyalty is nice, but an industry also needs smart consumers who are demanding and shop around.

It’s stunning to me that “Home Depot estimates sales to plumbers and other tradespeople make up about 40 percent of the company’s revenue.” If so, what took them so long?

Braintrust
"This is smart and it should be good for society and for the individuals who receive this training."

"Not only are they helping to solve a current and future problem for the industries, they are insuring the growth of their business as well."

"We’re seeing more “retail as activist” in many areas and I would include this as an example."