How much did Amazon’s Prime Day hurt rival retailers? 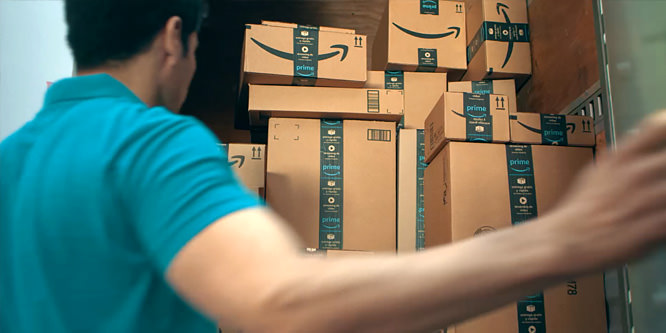 Prime Day 2017, Amazon.com has reported, was a huge success, helping the company and sellers on its marketplace achieve record sales. But what effect did the annual event have on those retailers competing with the e-tailing giant? The answer, it turns out, depends on whom you ask.

Slice Intelligence, which analyzes data from a panel of 4.2 million online shoppers on a daily basis, found that rival retailers also saw their market share levels drop on Prime Day. J.C. Penney, which had a 0.52 percent share of the U.S. e-commerce market before Prime Day dropped to 0.14 percent while Kohl’s went from 0.61 percent to 0.35 percent and Macy’s from 1.8 percent to 1.0 percent. Walmart saw its share fall from 2.1 percent to 1.0 percent and Target declined from 1.5 percent to 0.9 percent.

While Amazon’s rivals may have lost sales on Prime Day, research by Liftoff, a mobile app marketing and retargeting platform, shows that many rebounded soon thereafter. The firm’s data shows purchases using non-Amazon shopping apps declined 12.84 percent on Prime Day. The effects were not long lasting, however, as purchases with non-Amazon apps peaked at nearly 71 percent two days following the event.

DISCUSSION QUESTIONS: If you were competing with Amazon, how would you respond to Prime Day going forward based on the data shared in this article? Which retail channels (department stores, home improvement, mass merchandisers, etc.) do you think are currently most at risk when it comes to losing customers to Amazon.com?

Please practice The RetailWire Golden Rule when submitting your comments.
Braintrust
"It would be hard to go head-to-head but it's certainly possible to focus on other products not emphasized by Amazon."

"...it’s important to not look at this solely as Amazon’s gain being everyone else’s loss — we are seeing the tides raise many boats."

"...perhaps rather than cultivating strategies to compete with Prime Day, joining or collaborating with Amazon’s marketplace may be advantageous."

7 Comments on "How much did Amazon’s Prime Day hurt rival retailers?"

We know that Amazon Prime members, and therefore their most loyal shoppers, skew to a higher household income. These households value convenience and selection, something that Amazon has set an exceptionally high benchmark for. Retailers who target the upper-middle income household will take the biggest hit from Amazon. Retailers who want to compete with Amazon will have to do it on a dimension that Amazon is weaker in such as product curation and discovery, impulse purchases or vendor relations.

While in-store sales and share declined, we actually saw increases in online sales. Online sales for companies we analyzed roughly doubled on Prime Day vs. an average Tuesday, and GNC (one of our customers) experienced a five-fold increase on Prime Day vs. a typical Tuesday. So it’s important to not look at this solely as Amazon’s gain being everyone else’s loss — we are seeing the tides raise many boats.

As the article says, it depends who you are as a retailer and when and where your shoppers shop. Since traffic rebounded for most retailers, there are ways to bookend Prime Day with attractive offers and promos. It also depends on if you’re competing directly with Amazon or not as Prime Day has a different focus each year. As a retailer, it would be hard to go head-to-head (this year in electronics) but it’s certainly possible to focus on other products not emphasized by Amazon.

Retailers would be hard-pressed to compete with the reach, compelling bargains and impact of Amazon Prime Day. Amazon’s vast assortments and heavily discounted products on that day may just be an outlier that retailers will have to account for when they do their pre-season merchandising plans. Perhaps there will be a one-day substantial impact, and this should be planned for both from a store operations and supply chain perspective, yet in the grand scheme of things there may be ways for retailers to capitalize on this strategy.

Some reluctant retail brands such as Nike now have entered into the Amazon marketplace and they, certainly, as well as others will benefit from this increase in online traffic. So perhaps rather than cultivating strategies to compete with Prime Day, joining or collaborating with Amazon’s marketplace may be advantageous.

I had to dig pretty hard to figure out what they based their conclusions on. “Slice gets its data from e-receipts.” That’s interesting. Does this data have serious validity? Not really sure. It might merely reflect that Amazon’s intensive online push for this one day dropped online first shoppers (not total foot traffic). Assuming that it had a big impact, that’s quite serious to ponder. But did it have that much impact on other retailers? The same report with the big headline also shows clearly that Amazon’s biggest hits were overwhelmingly their own products. Echo Dot (#1 by a lot), Echo (#2 by a bunch), Kindle Fire (#5), Kindle Paperwhite (#8). That seems to fly in the face of the premise that Amazon Prime Day stole a lot from other retailers. This leaves me with a big “huh.” Amazon Prime Day is clearly a big PR win — just look at all the journalistic hype about it. Is it a problem for other retailers? Having dug a bit deeper, other than the PR hit, it’s… Read more »
0
|
-2
-   Share

If I were competing against Amazon, I would be in charge of an e-commerce store. This is important because brick & mortar stores losing market domination need to re-visit their determination to blame lost sales on e-commerce retail. A brick & mortar transaction does not have the same attractions or address the different needs available from an e-commerce transaction to the exact same consumer. The market now has more of the same type of transaction type selection as they do in product selection. Look at how vendors have survived — this might be a good place to start. There are many reasons that to date have settled into a seemingly insurmountable impasse when the perspective of new b&m opportunities resulting from the beginning of e-commerce retail was and remains forsaken. Price matching and immediate availability simply don’t create the incentives people need to return to the stores. The attempts by b&m retailers to add enthusiastic service and/or expertise with $9.00/hour associates owning high priority tasking has been evasive, to say the least. What is common… Read more »
0
|
0
-   Share

In-store may go down but I know that online can go up on Prime Day by virtue of more people being online shopping. Amazon trains people to shop on Prime Day like must-see TV. If more people are shopping online that day it could/should be great for online sales. When I was running sales for a primarily direct-to-consumer brand, we saw our sales increase on Prime Day not only on Amazon, but at Living Social, Groupon and our own website. Prime Day just became a second “Christmas In July” for us. Now if I’m an omnichannel retailer I would charge my team to have our own “sub-prime” deals (like what I did there?) ready to go and promote on our website, social channels and email database. Heck I may even promote them in-store leading up to Prime Day. If they aren’t walking in the door that day at least they know I’ve got something online. If there are Black Friday and Cyber Monday websites that curate all the ads and deals, excuse me while I… Read more »
0
|
0
-   Share

Braintrust
"It would be hard to go head-to-head but it's certainly possible to focus on other products not emphasized by Amazon."

"...it’s important to not look at this solely as Amazon’s gain being everyone else’s loss — we are seeing the tides raise many boats."

"...perhaps rather than cultivating strategies to compete with Prime Day, joining or collaborating with Amazon’s marketplace may be advantageous."