Is Alibaba’s online marketplace a good fit for IKEA? 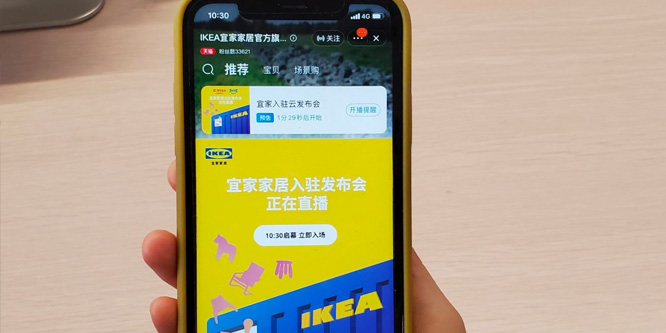 IKEA announced the kickoff of a six-month test selling its products to Chinese consumers on Alibaba’s Tmall online marketplace, the first time the world’s largest furniture retailer has sold on a third-party platform.

The virtual store will stock 3,800 of IKEA’s popular products and initially run across the east coast provinces of Jiangsu, Zhejiang and Anhui, as well as the city of Shanghai to complement IKEA’s operations in China. IKEA operates 30 standard stores in China along with two concept shops, a small-format store and an online site.

Abrahamsson Ring, managing director of Inter IKEA Systems B.V., IKEA’s global franchiser, said in a statement that the collaboration offers the opportunity to test and trial a new platform and explore ways it can fit with the brand’s existing infrastructure, supply chain operations and customer experience. “We take it step by step,” he said.

The partnership with China’s largest third-party platform is expected to help IKEA further reach the nation’s digitally-savvy consumers that are accustomed to multi-brand online platforms.

“Chinese people use Alibaba for every single aspect of their lives, as well as Alipay to pay for every purchase,” Michael Schirrmacher, UK MD at Bloomreach, told Internet Retailing. “IKEA obviously understands this and this move will definitely enable more Chinese consumers to purchase its products with greater convenience.”

IKEA is following the path set by other chains in the Chinese market. Costco entered China in 2014 with an online store on Tmall, the same year Zara, Burberry and ASOS joined the platform to boost their presence. Gartner last fall found 51 percent of 45 top global fashion brands it tracks, including Coach and Michael Kors from the U.S., were on Tmall. Louis Vuitton and Gucci were among the holdouts.

A surprising supporter of third-party platforms is Nike, which frequently touts its relationships with Tmall, Zalando, Asos, Flipcart and Zozotown overseas, despite having ended its relationship selling direct on Amazon.com last November.

At the NRF Big Show in January, Stuart Hogue, Nike’s VP, marketplace development, said retail marketplaces have grown over 30 percent over the last five years, 2.5 times the rate of e-commerce. Incorporating storytelling, highlighting presentations and partnering on consumer activation were some of the keys for brands to find success on such platforms, he said.

DISCUSSION QUESTIONS: Are third-party platforms becoming increasingly critical for retailers selling to U.S. consumers or is online marketplace participation primarily required in other countries? What parameters should define success on such marketplaces?

Please practice The RetailWire Golden Rule when submitting your comments.
Braintrust
"I am not sure if it is right for IKEA... For IKEA, buying anything but their simplest products requires some depth to that purchase."

1 Comment on "Is Alibaba’s online marketplace a good fit for IKEA?"

The retail environment in China is different than here. It is much more online focused. It is expected that almost 70 percent of all retail business will be done online by 2023. Over 700 million people shop online regularly. There is no better way to reach the vastness of the Chinese consumer than online.

That being said, I am not sure if it is right for IKEA. That is why the test is limited. For IKEA, buying anything but their simplest products requires some depth to that purchase — getting the right size, dimensions, color. It is a fairly complex process. The online environment is not ideal for that. But they are offering only about a third of the products they normally sell. My guess is that they are ones you can simply buy without much challenge.

For most well-branded products third-party platforms are a must. It is all about reach and convenience. That is what Amazon, and eBay and their like can deliver.

Braintrust
"I am not sure if it is right for IKEA... For IKEA, buying anything but their simplest products requires some depth to that purchase."