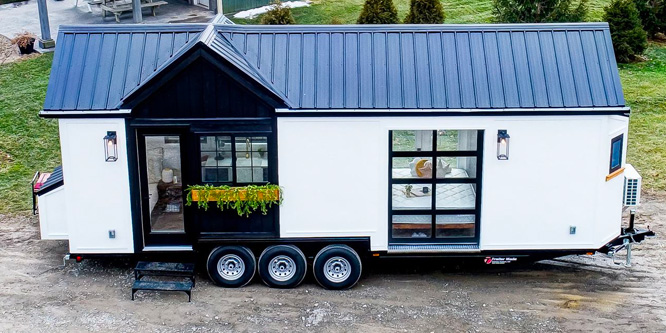 Walmart is taking its mattresses on a big tour in a tiny house.

The retailer is taking its “Allswell Tiny Home” moving popup on the road in mid-February, according to CNN. Walmart will be sending the small, staged living space, which is set up inside a branded trailer, from New York to a number of different big cities. The promotion is primarily meant to allow customers to test out the retailer’s Allswell mattress brand, which it launched last year and has thus far been available exclusively online. The company is not ruling out the possibility of a fleet of traveling Allswell popups or even standalone stores spiraling out of the test.

Recent years have seen Walmart build up a catalog of direct-to-consumer brands across numerous verticals. The company has done so both by high-profile acquisitions of Millennial-focused brands like ModCloth and Bonobos as well as through the launch of its own homegrown brands.

And the Allswell brand is not the chain’s only incursion into direct-to-consumer home furnishings. Just this month, the retailer launched an online-only private label furniture brand called Modrn, according to Digiday.

As online-only, direct-to-consumer models of distribution have caught on for products like mattresses and other bulky home furnishings, brands and retailers have found themselves experimenting with different kinds of physical environments to boost brand awareness, allow for on-the-spot product demos and mitigate the high cost of returns.

With the mattresses market in particular, once online-only brand Casper has begun to open physical stores, with plans for 200 locations. The brand has also opened experiential showrooms like The Dreamery in Manhattan, where visitors can pay to take naps on Casper products. While there are no sales directly from the showroom, there is a Casper store next door to The Dreamery.

Even traditional home furnishings brands have been exploring new ways to let potential customers to get a hands-on feel for the merchandise. West Elm and Restoration Hardware (RH), for instance, have opened up chains of hotels that are furnished with their products.

DISCUSSION QUESTIONS: What do you think of Walmart using its tiny house tour to increase consumer interest in Allswell mattresses? What strategy might Walmart use to bring the mattress line into physical locations going forward?

Please practice The RetailWire Golden Rule when submitting your comments.
Braintrust
"This tiny house on the road is fun, kitschy, different and likely to be very effective."

"Maybe they will be like Sears used to be and start selling houses."

"Walmart can infuse the trust customers have in the brand into a category replete with wild price variation and requiring a black belt in price negotiation."

11 Comments on "Is Allswell with Walmart’s tiny house tour?"

I think Walmart using tiny houses to promote Allswell mattresses is brilliant because it’s very different. Tiny houses have become extremely popular no doubt from the shows on HGTV and the many exhibits throughout the country. Now Walmart gets to tap into that market to promote a mattress brand. I don’t see this as a long-term opportunity but for the short term it will create a lot of curiosity and interest and should prove to be successful. It will help build the Allswell name, and if the next step is popups or free-standing stores, it will help them be prosperous.

Agree, brilliant. New concept for their existing customer base. Interesting concept for consumers who aren’t in their existing base. It’s simple and will likely be extremely effective. Also, I want to buy that adorable tiny house … so they should sell that, too.

Walmart’s tiny road show is a great way to drive awareness for Allswell but all of the groovy marketing in the world won’t matter if customers don’t dig the product. Fortunately for Walmart, reviews for Allswell are consistently in the 4+ range so the tour backs up demand. The notation, “sold and shipped by Hayneedle” pops up on some, but not all, of the Allswell mattress descriptions on Walmart.com. It will be interesting to see how Walmart continues to flex its acquisitions to make these types of brand pull-outs happen.

Another example of how this is not your mother’s Walmart! Walmart has increasingly shown surprising agility and innovation in merging physical and digital. A rolling popup as a tiny house is brilliant on so many levels. Tiny homes are catching on in the U.S., and that in itself will generate interest. Yes, it is a perfect way to demonstrate Allswell mattresses. Just imagine what else Walmart can showcase inside of a living showcase. It could become a major “try and buy” rolling marketplace for many brands selling with Walmart. Perhaps the greatest genius of all — no permanent retail space! Walmart can roll and test these anywhere, including places that don’t have a Walmart store.

This tiny house on the road is fun, kitschy, different and likely to be very effective. Walmart seems to have a more light-hearted, human touch lately. Love it!

Terrific idea to introduce and raise awareness of a private brand while solving accessibility and trial. The tiny house tour brings the product to consumers and emphasizes Walmart’s practical and frugal values through the theme of the delivery mechanism: the tiny house movement.

By integrating online and mobile showroom experience with quick home delivery service, Walmart can infuse the trust customers have in the brand into a category replete with wild price variation and requiring a black belt in price negotiation.

I love it. If the mountain won’t come to one, one has to go to the mountain after all. And, let’s face it … it’s fun. My bet? Not only will Walmart sell some mattresses they’ll polish up their brand image in the process, especially with younger consumers.

As a promotional device to make a small splash and raise awareness that they have a line of DTC mattresses, it’s mostly a smart promotion – I love traveling shows and even though they reach only small audiences, they can have a strong pass along impact.

However, I am concerned that “tiny homes” could sully the brand for the mattress. While there’s been tremendous hype about the tiny, it appeals to a niche.

My concern promotionally would be that “tiny home” would over-ride “great mattress” as the consumer message from the tour.

I would also express concern that we’re at the tail end of the tiny home fad. The TV shows are fading, the news stories are dropping…

Walmart needs to take care with the “optics” on this one and make sure it’s more a traveling show than a tiny home show.

This is a me-too comment. I love the idea of the tiny house tour. Just letting people walk through the tiny house will be a win for Walmart. I hope everything in the house comes from Walmart.

Maybe they will be like Sears used to be and start selling houses.

The tiny house tour is a great way to get media exposure and increase brand awareness from nationwide press coverage and local media when the tiny house rolls into town. This looks like a test and a way to spark consumer awareness and I don’t envision that they will have a fleet of tiny homes combing the country anytime soon.

Walmart may carve out out some space in their traditional stores for mattresses or they my open home stores that showcase their multiple lines of furniture merchandise. Whatever they do, furniture stores will be watching closely.

It’s interesting — why not just demonstrate these in their stores? (Probably because people don’t associate Walmart with furniture) — but as is (almost) always the case with a ~ half-trillion-dollar company, I wonder how much of an overall impact an esoteric effort like this is really going to make.

Braintrust
"This tiny house on the road is fun, kitschy, different and likely to be very effective."

"Maybe they will be like Sears used to be and start selling houses."

"Walmart can infuse the trust customers have in the brand into a category replete with wild price variation and requiring a black belt in price negotiation."