Is an urban revival a sign of hope for indie grocers? 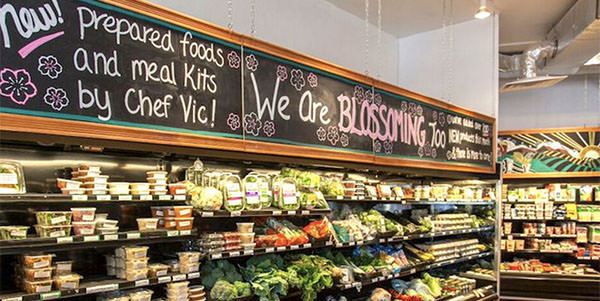 At least six independent grocers have opened throughout Washington D.C. in the last two years with more to come, leading The Washington Post to bill the phenomenon as a “resurgence of the small neighborhood grocery store.” The story posits that the reappearance of mom-and-pop grocers is a response to a broader “back-to-the-city” movement, with new urban dwellers desiring convenience and walkability in cities.

The kind of intimate knowledge of the products and the more personal relationship with customers that mom-and-pops can provide can be big differentiators against impersonal national chains. On the other hand, they can also offer differentiate themselves from high-end, boutique grocers by offering staples at a more reasonable price point.

But mom-and-pop grocers have long found themselves struggling as they get undercut on price by national and global grocery chains. So it’s not clear if D.C.’s indie grocery renaissance represents a trend that will continue on into the future, or if it is only a matter of time until the big chains move in.

National retailers often associated with suburban big box stores have, in recent years, begun rolling out new concepts meant to better address the needs of urban shoppers. Target, for instance, has started opening small-format “flexible” locations, with assortments tailored to the shoppers in the neighborhoods in which they appear. The location in Forest Hills, Queens is reported to have more kosher offerings for the neighborhood’s Jewish population, as well as local sports team memorabilia. In this regard, the stores seem to be trying to offer the level of localization that comes naturally to mom-and-pops.

New, low-price chains that compete with independents have also entered many urban markets. German grocer Aldi has proven popular in the U.S. and has been followed by the much-anticipated appearance of Lidl. Even big box giant Walmart has been reported as being concerned about the increase in competition.

Please practice The RetailWire Golden Rule when submitting your comments.
Braintrust
"Cities that revive their downtown areas can benefit from independents and chains moving back in to serve their citizens."

"There’s an old saw that the toughest competition to beat is an independent who can establish a connection with shoppers like no other."

"For many that live in the city, there’s nothing more personal than the food you buy for yourself."

12 Comments on "Is an urban revival a sign of hope for indie grocers?"

I can see urban areas as one way for indie grocery chains to appeal to the local market. But really, it is being different that matters. In a local urban area, the mom-and-pops have the opportunity to focus on the local cultures within that neighborhood. They don’t have to be concerned with mass appeal across the nation, so that becomes their success opportunity.

I also see possibilities in suburban areas — appealing to the different suburban cultures as well as creating fun and pleasant experiences for shopping. As the article points out, there is so much competition with customers having too many choices. The only solution today that stands out is “be different,” and that is something these local indie grocery chains are doing in D.C. and no doubt why they see success.

D.C. is demographically unique in many ways, so it is hard to project trends there onto the U.S. However, urban populations are generally exposed to more choice — which makes them look even harder for the next unique thing. Indie grocers are one step up the grocery chain from the “butcher, the baker and the candle stick maker” — the staples of every turn-of-the-century “High Street” in Europe. Specialization was and is more convenient for shoppers in urban areas, and that makes it appealing.

Independent grocers used to be THE way people shopped in urban areas. Think D’Agostino, Gristedes and Red Apple in New York as a good example. With the revival of cities as a desirable place to live it stands to reason that well-run independents can flourish again. However, with the decline of stores in the suburbs and the growth of online shopping, chains will be looking for new opportunities to reach consumers. Cities that revive their downtown areas can benefit from independents and chains moving back in to serve their citizens.

There’s an old saw that the toughest competition to beat is an independent who can establish a connection with shoppers like no other. That said, the retail grocery business has become extremely competitive. It’s multichannel — and online isn’t making it easier. Indeed everybody seems to be selling groceries, and they are mainly corporate chains with efficient distribution and merchandising organizations and clear cut strategies. Dollar stores, drug stores, Aldi and small footprint units of major supermarket chains are all invading the urban neighborhoods cited in the article. While such organizations as IGA do a great job offering independents the means to compete, it would seem that independent grocers have a very difficult struggle ahead of them. That class of retailer may well be going the way of the independent pharmacy, which has pretty much been submerged by chain retailing.

The green grocer for fresh fruits, vegetables, milk and bread with more increased visit frequency is an operating foundation for the future based on the idea that everything old is new again. Smaller storage spaces and the wish for variety and quality drive this value proposition.

Well, there is a big difference between a “grocery store” and a boutique specialty store selling food. The Washington Post story is describing the latter. These places sell very expensive and specialty foods. That’s fine, but it’s not like they are addressing “food deserts.” While D.C. has a number of independent “full line” but small footprint groceries, it’s not a growing segment of the market. There are also a number of small grocers operating in lower income areas and the independent Yes! Natural Grocery which has about six stores in the city. (My Organic Grocery, MOM, opened a store on the outskirts of the city a couple years ago.) But in terms of seeing the development of independent, creative “full line” but small, appropriately urban-sized markets (like a Bi-Rite in SF, or the various markets like on Mission Street in San Francisco or on the streets of Brooklyn or Manhattan) other than Yes!, only one comes to mind, the Korean-American owned “Streets” market, which is mentioned in the Post article. It is not a boutique… Read more »
3
|
-2
-   Share

Actually, what I think is most interesting in city supermarket trends is happening in Boston, where Royal Ahold is testing the bfresh format. It’s the kind of urban specialty market that the Post thinks is happening in D.C. but isn’t. What’s interesting to me is that Ahold has tested this in Philadelphia (under a different name) and Boston but not D.C., where it could be a useful addition to the market –especially given that WaWa thinks so and will be introducing an upscale convenience store to the city (no gas). The bfresh format is probably like the 365 Whole Foods store, but more focused on conventional products.

Cities are an interesting market for independent grocers. For many that live in the city, there’s nothing more personal than the food you buy for yourself. If there’s an ability to form a personal relationship with a grocer that serves your local neighborhood, than that is itself an incentive to shop there. Can big chains replicate that? Possibly, but they have to think differently to approach this vs their usual suburban markets. Is DC a good sample to reflect nationwide trends? I’m not so sure as DC is very unique city with wide demographics and income levels that may not represent other cities. Like other retail segments this really is a function of merchandise and product assortment. Local grocers that carry unique and desirable products will get attention from those living nearby!

Washington’s probably a bad example to use if you’re trying to portray “typical America” (IIRC, the original “Middletown” of the 1920s study was Muncie, IN … but I digress).

That having been said, there are urban areas that are doing well, and as such represent a growth market. Whether it’s particularly an advantage for independents is harder to say. On the one hand, the (presumably) higher incomes and more sophisticated tastes seem to match well the niche where indies can do well — and in smaller areas a small market may be all that can be supported. OTOH, the same issues (cost, scalability, financial stability) that favor large chains may come into play as well. And it’s easy to overstate things — the urban centers that are (truly) thriving tend to be in metro areas that are truly thriving, and it’s far from being the entire country.

The downtown San Diego grocery scene has a mix of large, small, national and local retailers. The most successful are a national chain that is tuned into the community and a price-sensitive chain for bargains.

DC’s independent retailer sector was wiped out in the 1968 riots and has never really recovered. Separately, the independent grocery chains that existed either got acquired or went out of business. The same goes for the independent department stores and regional apparel.

Plus, the city’s commercial real estate has been “reproduced” on a different scale because the downtown market is part of the national-international real estate development and financial system, and this in turn shapes the property tax assessment methodologies for the entire city, whether or not a “neighborhood” commercial district is part of the national-international system or not. This makes rents too high, generally, to support quality independent retail.

I think the opps for indie grocery stores in big cities went out with the horse and buggy — and the introduction of technological tools to grease the skids for ordering or delivery. Only large chains can afford to identify and carry the specific assortment for each area, and have advantage of their supply chain arrangements and pricing — to exist and flourish in metro communities.

Braintrust
"Cities that revive their downtown areas can benefit from independents and chains moving back in to serve their citizens."

"There’s an old saw that the toughest competition to beat is an independent who can establish a connection with shoppers like no other."

"For many that live in the city, there’s nothing more personal than the food you buy for yourself."