Can indie dollar stores compete with the big chains? 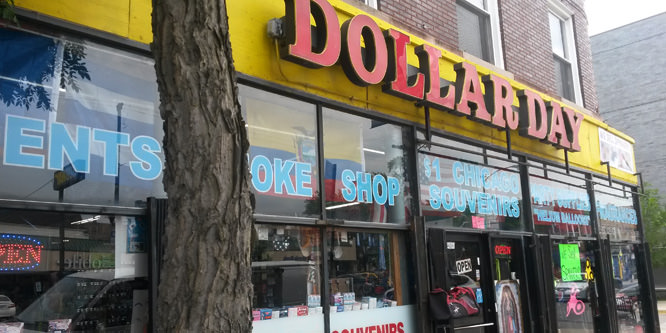 Low price is implied in the name when it comes to dollar stores, but there’s only so close to rock bottom a store can go. That’s a fact that mom-and-pop dollar stores have been struggling with. As dollar stores grew more popular, big chains moved into territory once run by independents, making it hard for mom-and-pops to say afloat.

Owners of dollar stores in some New York neighborhoods have begun upping their services to compete with Dollar Tree/Family Dollar and Dollar General, whose selection and prices they can’t beat, according to The New York Times.

Store owners report offering self-serve coffee, holding products for customers until they can pay for them and taking requests for items to stock. In neighborhoods with large minority and immigrant populations, stores have begun adding food and beverage products from manufacturers such as Goya. Some independents are also adding items such as air conditioners in the summer and heaters in the winter to better address the needs of local shoppers.

“It’s evolved beyond just being a 99-cent store,” Habib Abdul Musiwir, manager of 99¢ & Up Millennium Discount & Party Supply in East New York, told the Times. “We’re meeting the needs of the community.”

While some of the differentiators independents have tried may be relatively cheap to implement, there’s a concern about the increased operational costs that come with competing for customers with the big chains. And even if they had resources to revamp and move up-market, such a move would run the risk of alienating core customers.

On the chain store side, some have done just that. Aldi, the hard discount grocery chain, has made significant changes to its once-barebones offerings. The company relaxed its cash-only policy to allow for credit cards and made more natural/organic brands and fresh offerings available. The company has also begun renovating and remodeling its U.S. stores nationwide. It has also launched an upscale store concept in Australia.

There have recently also been accusations of edging stores out of the market thrown around between dollar store chains. The defunct chain Dollar Express has been engaged in an ongoing lawsuit with Dollar Tree alleging that the larger chain tried to sabotage the smaller one as it got off the ground, according to the Charlotte Observer.

DISCUSSION QUESTIONS: How can mom-and-pop dollar stores differentiate themselves in a space where low prices are the primary concern among shoppers? Is there hope for the independent dollar stores in a business dominated by large chains?

Please practice The RetailWire Golden Rule when submitting your comments.
Braintrust
"Mom-and-pop store operators have the ability to build personal connections with shoppers which may help foster some modicum of loyalty."

"At some point the “kill or be killed” philosophy of retail will be its undoing. Evolution has its limitations."

"Will dollar stores survive? At least in the foreseeable future they have a chance to not just survive, but thrive against the bigger chains."

13 Comments on "Can indie dollar stores compete with the big chains?"

The services mentioned in the article are one way indie stores can compete. A big differentiator can be being in-stock. Something that is all too common in the larger chains is the low staffing levels. As with all retail, labor is a large percentage of their operating cost. This leads to out-of-stocks.

As one former manager related to me, “it wasn’t that we didn’t have the item in the store, it was that it was not on the shelf. The labor budget I had was not large enough for me to be able to fill the shelves as quickly as they needed.” A great price for an item means nothing if the item is not on the shelf.

Mom-and-pop dollar stores are in a tough spot. Given the abundance of low-cost goods available from the plethora of dollar store chains, there seems to be two primary ways for mom-and-pops to compete: 1.) store location and 2.) personalized store experience.

The big chains tend to place stores where there is a concentration of shoppers. Mom-and-pop stores located in neighborhoods may have a slight geographic edge serving shoppers in close proximity and who live in the area. While lots of the product at dollar-type stores is similar, mom-and-pop store operators have the ability to build personal connections with shoppers which may help foster some modicum of loyalty.

“Be different” is the only solution and, by “being different,” I don’t necessarily mean the lowest prices. Some of the ideas in the article are good. It comes down to giving the customer a reason to shop your store. This philosophy works. Today not only is everyone getting into each other’s space, everyone is chasing one another on price alone. Price is important, but why I should shop your store and not your competitor is a more important question to ask, especially when the price and products are the same.

Art Suriano is right. Independents have a unique opportunity to know their clientele and micro-merchandise to serve them. Knowing customers by name and providing unique services is a recipe for success — and always has been.

Perfect summary, Cathy. Actually both Mark and Art made pretty well the same points — thumbs up to all.

Another David and Goliath story. Little guys competing against big guys. No doubt dollar stores are about low price and not service, but that is not the only way to compete. It’s not about Nordstrom level service, it’s about friendly and engaging people who are knowledgeable about merchandise when asked. Also, good employees can recognize regular customers and engage at a level that bigger stores can’t. Take advantage of that. The idea of creating a gathering place with coffee is nice. Popcorn is good. Holding merch is a nice service. Compete in areas the big guys won’t or can’t. That’s the strategy. Will dollar stores survive? At least in the foreseeable future they have a chance to not just survive, but thrive against the bigger chains.

At some point the “kill or be killed” philosophy of retail will be its undoing. Evolution has its limitations. One quote in this article holds the key: “We’re meeting the needs of the community.” Mom-and-pop dollar stores aren’t interested in growing a national brand; most would be happy to make a decent living within a square mile. If they truly focus on the needs of the community, develop enduring relationships, stop trying to replicate the national brands and become beloved in their neighborhood it will be a satisfying venture for all. Except maybe for the wolves. I had a disturbing conversation with a financial guy yesterday over a venture I’m working on. “Investors want to know how you’re going to reach a billion,” he said. What kind of nonsensical/BS thinking is that? What is so wrong about building a solid small- to mid-size business that is doing good in the world and is financially rewarding at the same time? Of course there is nothing wrong with building a huge company — it’s a matter of,… Read more »
2
|
0
-   Share

Dime stores were fun. Even though most were chains, novelty abounded, creating excitement. A reason to go and buy cheap American goods. Today Dollar Tree and the like are loaded with novelty goods mostly made in China. Just smell the chemicals in the air. Making dollar products in the U.S. is likely not possible, but how about “jobbing” goods to excite the intended audience of customers? Look at the tons of third-party goods on Amazon or Walmart. Wight there be sourcing opportunities to merchandise different point of view than the China products, even if the products are not made in the U.S.?

Can ANY indie store compete with the big dogs? Sure! There has been no better time in history for shopper propensity to support the little entrepreneur than today. Create the awareness of your brand, execute differentiated service levels and services and make your stores simple to navigate. Easy, right?! 😉

Smaller retail brands like indie dollar stores have a strength that megastores and big chains don’t – specialization. By being a jack-of-all-trades retailer, big chains miss out on the opportunity to provide their consumers with products they actually want. When consumers are forced to settle for a product that’s not entirely what they want or isn’t well made, the dollar amount doesn’t matter as much. Smaller dollar stores that take advantage of their niche place in the industry and focus on creating high-quality, low-cost products that they know their consumers will love, will find it much easier to compete with the big chains in the years to come.

By definition, a dollar store is all about price, so the normal clichés — service, know your customer — aren’t likely to have much relevance; and even worse, they’re often about price because the customers are low income and have little choice, even if other options were offered.

So I don’t see much of a future … perhaps take a few 99¢ knee pads out of stock and pray.

Location may need to add a practicality factor for investors with only modest means to participate. If independents choose to compete directly against much larger competition the risk may exceed the time and resources needed to start, stabilize and grow. Weighing the downside or disadvantages must be a consideration prior to the move into a market. If the business is in existence and the territory is invaded by the big box, then a change in strategy needs to be considered immediately. Waiting to die is not as good as getting out or relocating while you can. Always remember the larger company knows you are there or considering the option to open. They always will seek to take only their fair share of the business. They consider 100% to be their fair share.

The independent retailers in this industry have a tough challenge in front of them. But if it’s your passion or family legacy to be in the dollar store business I do believe it’s possible to survive. Their key to success is avoiding the temptation to focus on being the lowest price in the marketplace, and instead focusing on providing a better shopping experience. There were some great suggestions in this article on how to do that — like offering ethnic foods specific to your neighborhood. If they can find the pain their shoppers have with their competitors and address it, they can win. Perhaps it’s offering more flexible financing options or home delivery services. Maybe their shoppers need a store that’s open before they go to work or later in the evening. Or fun kid-friendly shopping carts or coloring pages could entertain kids while their busy parents are running their errands. I commend the brave entrepreneurs finding a way to make it work in this space!

Braintrust
"Mom-and-pop store operators have the ability to build personal connections with shoppers which may help foster some modicum of loyalty."

"At some point the “kill or be killed” philosophy of retail will be its undoing. Evolution has its limitations."

"Will dollar stores survive? At least in the foreseeable future they have a chance to not just survive, but thrive against the bigger chains."