Is Crazy Cazboy’s pricing too crazy or just crazy enough? 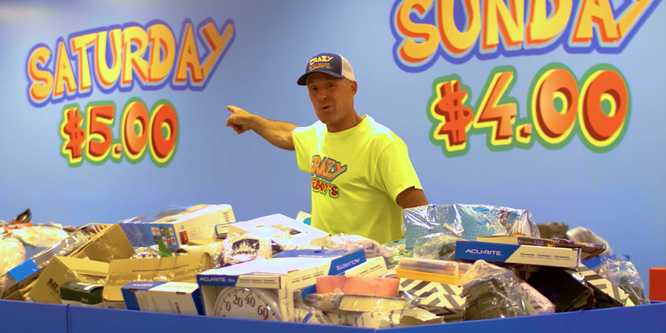 The brainchild of Birmingham, AL startup maven John Cassimus, Crazy Cazboy’s is a store where prices decrease steadily throughout the week, according to the Over The Mountain Journal. On Friday, the discounter brings out new merchandise all priced at $6. On Saturday, prices drop to $5. Continuing the day-to-day decline, on Wednesday the price on all products reaches a low of 25 cents.

The chain opened its first store earlier in May. Mr. Cassimus intends to open five to seven more store locations in Alabama and nearby states by the end of the year.

A video on the Crazy Cazboy’s Facebook page showed an appreciable amount of foot traffic on the store’s first 25 Cent Wednesday, with customers digging through large bins of product.

Crazy Cazboy’s is Mr. Cassimus’s third liquidation discounter business venture, according to the blog BhamNow. The store is sourcing liquidated product from Amazon.com, Best Buy, Home Depot and other big box retailers. A significant amount of product comes from Target. Products on hand range from refurbished iPads to brand-name baby wipes and greeting cards. Ninety percent of the product is in new condition,  according to Mr. Cassimus.

While Crazy Cazboy’s experiment seems like a radical one and perhaps difficult to sustain, larger chains have experimented with scheduling discounts on specific days.

Beginning during the 2017 holiday season, for instance, Target began offering deals on particular items only on weekends — a time when twice as many customers visit its stores. The chain was so successful with the experiment that it brought back the deal structure for the 2018 holidays. During this period, the chain also ran single-day flash deal discounts.

DISCUSSION QUESTIONS: Is the Crazy Cazboy’s pricing structure nonsensical or sustainable? What might others learn by looking at such an experiment and can the lessons be applied beyond the liquidator/deep discounter space?

Please practice The RetailWire Golden Rule when submitting your comments.
Braintrust
"The thrill of the hunt is real for a ton of people – so it definitely could be a business that is sustainable."

"Is the name of the business gratingly obnoxious? Sure. But is there a huge market right now for treasure hunt-type retailers? Definitely."

"This automatic markdown pricing strategy is similar to what we did at Filene’s Basement back in the 1980s."

9 Comments on "Is Crazy Cazboy’s pricing too crazy or just crazy enough?"

Seems counterintuitive in the Marie Kondo era – to offer a collection of ‘stuff’ for people to accumulate because it’s cheap may not have the appeal it once did. However, that said, if they are able to maintain a steady flow of inventory from the retailers’ mentioned, the thrill of the hunt is real for a ton of people – so it definitely could be a business that is sustainable.

Wow! I’m having a flash back of Filene’s bargain basement. Of course this is a gimmick. However, sources for product are not in short supply for Crazy Cazboy’s venture. Outside of stores dumping obsolete and unwanted “markdown demanding” merchandise, you can find a hidden supply of products everywhere. A semi truck turned over and these guys buy the whole trailer for a price – without seeing inside until they pay. The gamble can pay off. I once met a merchant that salvaged 64 televisions – nice ones, for pennies on the dollar, from a flipped trailer. Will this merchant and these opportunities stay? When will people stop looking for that treasure that “just might be “around the corner” in the store?

I can understand a pricing mechanism that changes its prices each day to make it a fun experience and create a bazaar type atmosphere. You never know what price you are going to get. But to reduce prices each day across the week in the same pattern each week does not make much sense. Surely, if you want to keep people coming to your store it would be better to change the price charged each day randomly. That way people have to come to see what price it is today. The challenge is that with social media, the word will get out very quickly.

Interesting to keep a watch on this one. It is really is totally crazy Cazboy’s!

This automatic markdown pricing strategy is similar to what we did at Filene’s Basement back in the 1980s. We would print tickets that included markdown dates and prices that included price drops every 15 days. The ticket would indicate the date the price will drop and customers would come back on that date that the price drops. The system would automatically adjust the price based on the date. The product didn’t have to be reticketed, which reduced labor costs.

Crazy Cazboy’s pricing strategy and refreshed product mix on a weekly basis appeals to consumers’ love of the “treasure hunt.” The scheduled markdowns gets people to return for items to see if they are still available at the discounted price they are willing to pay for the product. This is a clever strategy and I am surprised that more retailers haven’t adopted this pricing strategy.

Is the name of the business gratingly obnoxious? Sure. But is there a huge market right now for treasure hunt-type retailers? Definitely.

What I’ll be interested to see is how Mr. Cassimus prevents shrinkage in a place where the inventory is so disorganized. I foresee a need for some type of structure down the line.

A fascinating side effect of the digital retailing trend is the flood of returned items that need to be inspected, re-furbished and re-flowed back into inventory at a cost that exceeds the expected margins. Looks Like Caz has tapped into this trove of reclamation center merchandise and built a retail concept around it.
I imagine he buys goods by the pound, sprinkling in just enough gadgets to inspire the treasure hunt. This is not so different from the early off-price apparel retailers (like the original Loehmanns in Brooklyn) who merchandised overruns and samples in a chaotic environment. Or the “odd-lot” type stores that sold primarily hard lines.

Scheduled markdowns are a vintage technique too. Many New Yorkers will remember the Sym’s apparel store that put dates on the garment tags.

The trouble is that the flow of genuine bargains runs short as the store count increases. Crazy Cazboy’s may not be a “gimmick” per se, but it will never scale, Wilbur.

This has been going on for years, and for the most part, the folks will wait until Monday or Tuesday to find the super cheap deals. I have been doing this stuff since 1983, with meat/frozen/bakery/grocery closeouts, effectively in a much more organized manner, and still do.

Everyone wants a bargain basement deal, and in poor counties like mine, it draws folks in. This weekend we have at our local library a monster lawn sale, and all neighboring areas there must be 500 garage sales, which creates a madhouse for crazy deal hunters.

This concept will work if there is some control on what is purchased and labor is kept to a bare minimum.

It’s like the retail version of Storage Wars. Even though the retailers mentioned in this thread — Filene’s Basement, Syms, Loehmann’s, Odd Lots, etc. — aren’t around anymore at least in their original form they did have a good run.

Now that e-commerce has indirectly generated another source of goods, it could be interesting to watch, but it won’t scale as James points out above. The customer won’t expect anything in terms of store experience, merchandising, return policies, etc, so the model can run on the cheap.

Braintrust
"The thrill of the hunt is real for a ton of people – so it definitely could be a business that is sustainable."

"Is the name of the business gratingly obnoxious? Sure. But is there a huge market right now for treasure hunt-type retailers? Definitely."

"This automatic markdown pricing strategy is similar to what we did at Filene’s Basement back in the 1980s."