Are weekend deals the key to Target’s holiday success? 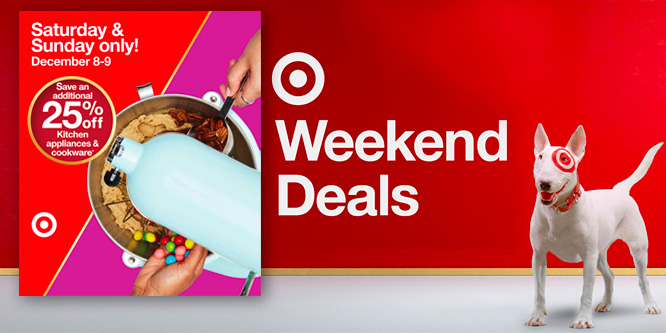 Target is the place for shoppers to be on the weekends leading up to Christmas, so the chain is bringing back its weekend deals promotion for the second holiday season in a row.

Twice as many guests shop Target on weekends than on an average weekday, according to a press release about the seasonal deals. And so, for the rest of 2018, the chain will announcing deals for the coming weekend every Wednesday in its A Bullseye View newsletter.

And as part of the deal promotion, the chain has also rolled out flash deals that have a more limited duration than a full weekend. On Dec. 2, one of the first in this year’s campaign was 10 percent off on the purchase of a Target GiftCard available only on that Sunday. The deal was good both in-store and online.

Target has begun to gain traction over the past couple of years against competitors — primarily Walmart and Amazon — that eclipsed them earlier in the decade. The retailer entered the holiday season on the momentum of a 13-year high in quarterly same-store sales. It has also begun touting itself as “America’s easiest place to shop.”

Today only! Get 10% off Target GiftCards. Restrictions apply. https://t.co/YXnnLi3E5c pic.twitter.com/Ql5l6vHrBV

The chain’s holiday strategy, however, has fluctuated considerably each of the past couple of holiday seasons, as have the results.

During Christmas 2015, the chain launched a massive holiday marketing campaign called its “Holiday Odyssey.” The campaign featured Neil Patrick Harris as the narrator of a holiday e-book and a number of commercials featuring toys and characters from the branded properties Target was selling. There was also an experiential New York City pop-up with interactive attractions based around each of the characters that appeared in the commercials.

In Christmas 2016, Target went with a more deal-centric strategy. The company experienced a 1.3 percent same-store sales decline which the chain later attributed to promotions that were too numerous and too frequent.

Last year, Target focused on the introduction of private labels as well as on offering more “meaningful promotions” like the weekend deals. It also introduced an e-gifting system.

DISCUSSION QUESTIONS: What can retailers learn from Target’s weekend deals strategy? Is this a plan that will work for other retailers or is Target a special case?

Please practice The RetailWire Golden Rule when submitting your comments.
Braintrust
"What other retailers can learn from Target is, don’t be afraid to take risks and try different things. "

"The questions I’d ask first are whether Target’s bulk of shoppers on the weekend is a.) similar to other chains and b.) if that, is that a good thing?"

"One question not answered is, what has been the impact on the weekend market baskets before this went into effect and now that it has?"

7 Comments on "Are weekend deals the key to Target’s holiday success?"

The questions I’d ask first are whether Target’s bulk of shoppers on the weekend is a.) similar to other chains and b.) if that is that a good thing. All chains may be experiencing weekend skews, so this may be nothing unique. Does this backloading play havoc with employee scheduling? Do they have lots of employees sitting around during the week while too few are on the floor on the weekends? I’m not sure (but I am open-minded) about whether this is a good strategy.

The adage, “if it’s not broken, don’t fix it” applies here. Target has been on a roll, and with 13 consecutive quarters of comp store growth it would appear as if they know what they’re doing — especially when the increases the last few quarters have been as high as they have been. We are living in a new world with not only enormous competition but many new ways that customers want to shop and new expectations. It’s not just online competing with brick-and-mortar, it’s mobile competing with clicks on the computer along with same-day delivery, and a barrage of other services retailers are looking to provide. So with that said, Target has found a niche that is working for them, and it’s working well. What other retailers can learn from Target is, don’t be afraid to take risks and try different things. Target has had many less successful concepts and programs before finally finding their way with the winners. For this reason, Target is successful and will remain successful.

This strategy walks a fine line, and they say it themselves. ” … promotions that were too numerous and too frequent.” Discounts on product that would have sold without the discount. Broad-based discounts accelerate the rate of sale on both best sellers and poor sellers. Why offer the same discount on an item with five weeks of supply and an item with 11 weeks of supply? Is the retailer managing their inventory to planned exit dates — to a planned seasonal conversion strategy? Of course they promote to generate traffic, but there are lots of moving parts at work. The more surgical they can be with the frequency and depth of their promotions, the better the margin outcome.

My wife (36-years-old) will stop into our local target (twice weekly; typically on a Saturday and midweek evening) to pick up staple CPG items and on her way out may pick up a Merona tank ($7.99), which she happily wears around the house.

I believe Target crosses over and picks up a demographic that CAN shop at the mall, but is conscious about its discretionary spend.

Black Friday and other finance metrics aided in the demise of retail — in my humble non-retail background, tech opinion.

Target — Stay on message and keep chipping away at the Gen M, X, Y and Zers that no longer need to wear a label, can afford luxury, but prefer to use their money on more meaningful purchases.

The weekends are for Costco, Target, basketball and soccer practice — not the mall.

With e-commerce being what it is today brick-and-mortar retailers must focus on the needs and wants of the consumer wherever they are and whenever they shop. Product availability, price and the ability to deliver to a destination on time share the driver’s seat in the present day market place. This attempt to draw floor traffic may just siphon weekday sales into the weekend results. No worries, sales are up so far and even Target might get a windfall lift from the momentum.

The fact that Target experiences higher foot traffic on the weekends should not be a surprise to anyone who has worked retail. They have elected to offer special limited promotions to those shoppers rather than use them to attempt to drive weekday traffic. This could be referred to fishing where the fish are. One question not answered is, what has been the impact on the weekend market baskets before this went into effect and now that it has?

Target’s success seems to be driven by an improved product focus and a communication strategy that is resonating with their core shopper as well as drawing in new shoppers utilizing modern digital tools. It isn’t surprising to see people avoid the malls on a weekend and jet in and out of a Target for needed items. Offering select deals for those consumers is smart and seemingly effective.

Braintrust
"What other retailers can learn from Target is, don’t be afraid to take risks and try different things. "

"The questions I’d ask first are whether Target’s bulk of shoppers on the weekend is a.) similar to other chains and b.) if that, is that a good thing?"

"One question not answered is, what has been the impact on the weekend market baskets before this went into effect and now that it has?"