Target is the early star of Christmas – online 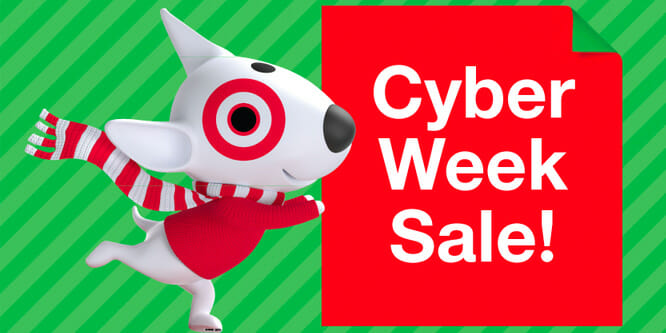 On Target’s third-quarter earnings call last month, CEO Brian Cornell expressed optimism about the retailer’s prospects for the holidays. Wall Street, however, was not impressed with the chain’s raised forecast which was not as high as analysts expected. Based on early results, however, it appears Mr. Cornell may have taken an under-promise and over-deliver approach in his remarks on the call that day.

According to data pulled from Slice Intelligence’s panel of over five million consumers, Target’s online sales grew 39 percent on Black Friday and 76 percent on Cyber Monday vs. the same days last year.

“Target offered aggressive price points on key items during Cyber Week 2017 and compounded that with an additional 15 percent discount across all of target.com during Cyber Monday,” Ken Cassar, vice president, principal analyst, at Slice, told RetailWire.

Target’s online sales grew 24 percent during the third quarter and now account for 4.3 percent of the retailer’s total, up from 3.5 percent last year. The chain has also pursued greater integration with its physical store operations with in-store pickup and returns. Today, 1,400 of Target’s 1,800 stores are set up to fulfill online orders.

Last month, Target launched Hearth & Hand with Magnolia, an exclusive label co-designed with Chip and Joanna Gaines, which features 300 giftables, home décor and tabletop items. Most of the line is priced at under $30.

Mark Tritton, chief merchandising officer for Target, said the launch of Hearth & Hand “set the perfect tone for the holidays.” Before the Nov. 5 launch of the line, Mr. Tritton said, “Guests were shopping online in the early hours and lining up outside our stores across the country. And based on early demand, we’re implementing our inventory contingency plans to quickly replenish items that are already selling through.”

Target, which has struggled with its menswear sales in the past, appears to have found something with its Goodfellow & Co. label. Bloomberg reports the fashion is on par with H&M, and sales of the line are up 10 percent over Target’s previous offerings.

DISCUSSION QUESTIONS: Does Target have the right marketing, merchandising and operational plan in place to make significant gains this holiday season and beyond? What are the biggest challenges it faces?

Please practice The RetailWire Golden Rule when submitting your comments.
Braintrust
"Target has focused on the correct categories with their new brands for the holidays. This should lead to a great holiday selling season."

"I’ve long since given up listening to Wall Street’s views on retail: the short-termism and lack of understanding are quite appalling."

"While in the past I would always bet on Walmart and never bet on Target, it seems they may be losing that silver bullet mentality. If so, BRAVO."

7 Comments on "Target is the early star of Christmas – online"

Target continues to do a lot of things right. Unlike other retailers who think business will come back on its own, Target — like Walmart — has continued to experiment with innovative ideas and concepts. As a result, their business is doing better than many other retailers. What I like about Target is they’re not afraid to make changes if something is not working. That is how they will maintain success. Also, they brought their stores together with buy online pick up in-store which is smart because that gets customers visiting their locations. Their online business even with the recent growth is still a small percentage of their overall sales, so it’s essential that they don’t lose focus on their stores and they have not.

I’ve long since given up listening to Wall Street’s views on retail: the short-termism and lack of understanding are quite appalling. Target does have the right plans in place and it was, from our data, a winner over Black Friday and Cyber Monday – both online and in stores. There are a number of things that deserve to be called out. First, the new brands in apparel and home; these are well curated and designed and are, especially in menswear, starting to attract new customers. Second, the store refurbishment program; while the new designs are not revolutionary they are a massive step-up from the old format. Locations that have been converted, like the Talking Stick store in AZ, are generating solid same-store sales uplifts. Third, the smaller format stores are working well from both a sales and profit perspective, and they are giving Target access to new markets. Fourth, the investments in price (and the good deals around Black Friday) are winning Target customers and helping conversion. Finally, the online and multichannel strategy in terms… Read more »
5
|
0
-   Share

At last, Target seems to be moving in the right direction. Still, it has a long way to go to catch Walmart and Amazon. To continue growth, Target needs to emphasize its store brands and prove that they are worthy in terms of style and quality, provide better customer service in stores and limit out-of-stocks. Online, free shipping has helped Target compete with Amazon, but Target’s website still lags Amazon and Walmart in search capabilities, and its SEO on Google frequently brings e-shoppers to pages that don’t carry the desired product.

I have always loved Target’s approach to developing modern stylistic controlled brands. This sets them apart and provides a unique reason for shoppers to frequent their stores. Certainly, the Magnolia association is timely.

Target has focused on the correct categories with their new brands for the holidays. This should lead to a great holiday selling season.

The challenge they face is price competition from larger brands who are deeply discounting to grab sales and customers. Another challenge for all retailers is the Amazon effect during the holidays.

While in the past I would always bet on Walmart and never bet on Target, it seems they may be losing that silver bullet mentality. If so, BRAVO. All the bright spots for the holiday season will revolve around retailers that wholeheartedly integrate the omnichannel philosophy.

The only real growth retailers will see this holiday season will be online. Even if it represents as little as 5 percent of total revenue, if it is growing at 40 percent that adds a 2 percent increase to the total which is more than the other 95 percent will bring in.

Will Target make significant gains? Are you talking comps or share gain or profitability or customer acquisition? Let’s say comps. Are you talking year on year or a five year stack? Nit picky, right? But it matters to clarify what “significant gains” means. Simply, Target will comp over LY. Seems it has sorted supply chain/in-stock, assortment (it’s the goods, not the brands), in-store signage, a return to likable personality, price, and marcom. Target’s audience definition seems to be refocused on middle American families with enough ambiguity to protect the urban stores. While not a popular topic, I think the “l’affair bathroom” remains, but has faded in importance. Certainly in light of the swirling cacophony of moral issues. Still, will suburban moms return in number to lift sales 1-3%? Operationally it seems Target sorted its online challenges and might be on parity with Walmart circa 2014. And that remains the threat to growth. Walmart moved more aggressively and dramatically to increase its relevance to a broader audience. Has Walmart’s repositioning worked? If so, Target will struggle… Read more »
1
|
0
-   Share

“Early” is certainly the key word in George’s headline … as the key phrase in the article is “under-promise.” And once again, if we’re going to preach omnichannel let’s practice it: who should care that the small proportion of online sales became somewhat less so if overall sales don’t grow?

Those gripes out of the way, I’m sure everyone, save perhaps their competitors, wants them to get their mojo back. And that mojo came from a simple formula: better-than-average merchandise presented well and sold at lower-than-average (or at least no more than average) prices. If they can do that again, without the distracting screw-ups of security breaches, ill-planned expansions, and what-not, then I think they’ll do OK. But I’ll wait ’til year’s end to see.

Braintrust
"Target has focused on the correct categories with their new brands for the holidays. This should lead to a great holiday selling season."

"I’ve long since given up listening to Wall Street’s views on retail: the short-termism and lack of understanding are quite appalling."

"While in the past I would always bet on Walmart and never bet on Target, it seems they may be losing that silver bullet mentality. If so, BRAVO."