Is the trade deal an early-Christmas present? 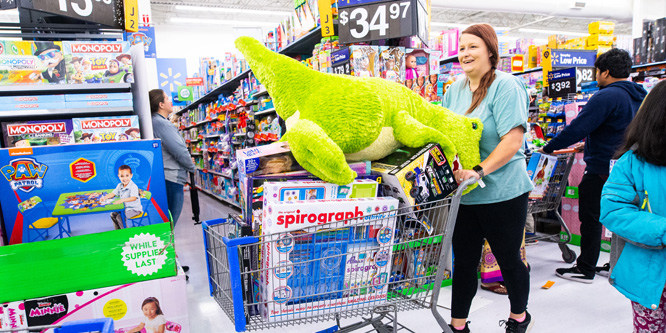 On Friday, the U.S. and China agreed on a Phase One Deal that provides some tariff relief for U.S. businesses that import from China. Should retailers be rejoicing?

Under the proposal, tariffs on $156 billion in Chinese imports — primarily consumer goods such as toys, clothes and electronics — that were set to be imposed on December 15 will be delayed. Those tariffs would have taxed virtually everything China sells to the U.S.

In a tweet, President Trump vowed to begin negotiations “immediately” on a more-comprehensive Phase Two Deal that could remove all tariffs.

Retail trade organizations praised the progress while pushing for a rollback of all tariffs. Critics see tariffs raising prices for consumers and undermining long-term planning. For instance, while some suppliers have significantly reduced their exposure to China, a fear is that new tariffs will be placed on countries they’ve shifted too. With precise conditions still being negotiated, there are also fears the Phase One Deal could fall apart.

A study from the National Bureau of Economic Research (NBER) released in October found that retail prices have been largely unaffected by the recent rounds of tariffs. However, the reason was because retailers “are absorbing a significant share of the increase in the cost of affected imports by earning lower profit margins on those goods.”

Retailers appear to be finding avenues to offset any rising input costs because most have only modestly reduced 2019 earnings, if at all, due to tariffs.

One mitigation tactic has been bringing in products earlier to avoid the tariff hits, although that now leaves the industry with elevated inventory levels. NBER’s study noted that with that tactic no longer an option, the pressure to increase prices to consumers would likely increase in 2020 should the tariffs remain in place.

DISCUSSION QUESTIONS: How much confidence should retailers have that tariff concerns will significantly ease in the coming year? What lessons around the supply chain, pricing and planning should the retail community be taking from the 19-month U.S.-China trade dispute?

"The biggest sticking point going forward — whether a deal affects consumer goods or not — will be the intellectual property issue..."

"Accepting the status quo might avoid short-term retailer and consumer challenges, but the long-term effects are tangible in the trade deficits we see today."

10 Comments on "Is the trade deal an early-Christmas present?"

I would caution against reading too much into this latest tariff news. Our trade policy has been nothing short of erratic these past three years, with no discernible strategy in place. I would expect the unpredictability to continue…

To achieve most anything of value, there is always some pain on the journey to getting the lasting gain. It’s great to see us at least attempting to erase the unfair advantage other countries have enjoyed for decades. Accepting the status quo might avoid short-term retailer and consumer challenges, but the long-term effects are tangible in the trade deficits we see today. Open, free markets are always the goal for those countries that believe in letting markets be driven by true demand, without the undue influence of controllable external factors, like tariffs and currency manipulation.

With one tweet, the whole thing could go off the rails. I agree with Dave Bruno — the only thing that’s predictable about the tariff negotiations is their unpredictability. Retailers have been planning for and dealing with tariff issues since the summer of 2018 when the administration first announced their moves against China. Unfortunately, I suspect that this uncertainty will continue through 2020. Given how the tariff negotiations have gone thus far, I’m not sure U.S.-China trade relations will ever be completely the same again.

There have always been macro-economic conditions that have impacted the retailer and consumer brand’s go-to-market strategies. While this is nothing new, the U.S-China trade dispute was far more disruptive than the business as usual conditions. This comes as a welcome respite, however we should not expect that much ease and comfort heading into 2020.

As far as lessons learned are concerned, retailers and consumer brands now more than ever need supply chain, pricing, contingency planning and risk mitigation strategies in place to help ride out any potential economic storms. The one thing that is always constant is change and economic disruption.

There is no reason to believe that this is anything but a momentary respite from what just as easily could have been a painfully deteriorating situation. Some political good news was needed and this scenario was handy. So maybe it’s a step in the right direction — emphasis on maybe. I’m sure the supply chain experts here on the BrainTrust will weigh in on whether or not they feel any better about planning a one-to-two year scenario with any comfort. I doubt it. Building and managing a supply chain for quality, speed, flexibility, efficiency and predictability is a painfully difficult long-term proposition. This is a moment of good news for consumers and retail in general, but the job of supply chain managers didn’t get any easier. Long-term strategic decisions will be difficult for the foreseeable future.

We can only hope that the administration recognizes the bad economics and bad politics behind the tariff wars. But I would be cautiously optimistic, because most of the announcements so far have been coming from Washington, not China. The biggest sticking point going forward — whether a deal affects consumer goods or not — will be the intellectual property issue, where I’m skeptical about China sticking to an agreement no matter what.

Given the back-and-forth nature of our U.S.-China trade policy and tariff threats, retailers should be more cautious than celebratory. It is simply too early to know if and when a long-term deal easing or doing away with the current tariff environment will be realized. My bet is on the uncertainty to continue into the first half of 2020, at which point we may see more easing of tariffs as the election cycle gets into full swing.

There’s a resounding sigh of relief from the industry, yet flexibility and agility from sourcing and buying all the way through supply chain execution remain a critical requirement on top of multiple planning and pricing contingencies.

Bottom line, there’s no respite to the uncertainties from policy announcements and negotiation via tweets. The effort, time and money that are lost due to the existing unpredictable environment do not appear to be going away any time soon. We can always hope this turns out to be more than just a mere fairy tale Christmas morsel.

How much confidence? Absolutely none. This was clearly a fairly arbitrary political decision on the part of a President that doesn’t need a consumer revolt over high Christmas prices in the middle of an impeachment. And there is a difference between tweets and trade policy, the former existing in a vacuum and the later involving at least two parties, one of whom is very well aware of the there’s weakness. And we live in an era where we could have a “definitive” statement on trade policy issues at 1:00 p.m. and an equally definitive refutation issued at 1:30. This isn’t about trade policy, it’s about trade politics, and politics is a fickle beast.

You have to wonder who is advising Trump to threaten US businesses with these deals? Certainly there are big problems in our relationship with China, but I haven’t seen evidence that saber rattling with tariffs is causing a result. And the only announcement here is that the US won’t hurt its own businesses as much as the US government threatened to.

I don’t think this announcement changes anything — because it’s not really much of an announcement. Maybe it’s a good step. But in fact, Phase Two is all that really matters. And considerable damage has been already done by the tariff’s and additional tariff threats — damage which can’t be undone.

What lessons should we take? There’s chaos in US trade policy so retailers and manufacturers should approach business decisions with extra caution right now. And that’s sad. Because it means I’d recommend against those major spending initiatives which would create jobs. The risk is simply too high — even with this non-announcement of an announcement.

"The biggest sticking point going forward — whether a deal affects consumer goods or not — will be the intellectual property issue..."

"Accepting the status quo might avoid short-term retailer and consumer challenges, but the long-term effects are tangible in the trade deficits we see today."