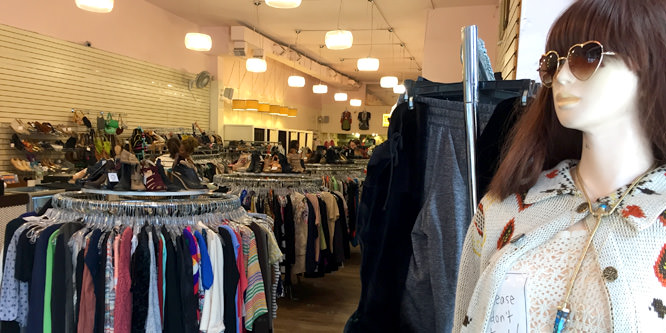 If you missed National Thrift Store Day on August 17 you weren’t alone, but next year’s event might garner a little more attention as the thrift store space keeps expanding.

Second-hand retail experienced a surge in popularity beginning with the last economic recession, according to an article on PYMNTS. Research by thredUP cited in the article indicates that the reselling of thrift clothing alone is slated to be a $33 billion industry by 2021.

Second-hand retail isn’t the only space popular with price-sensitive shoppers that has expanded dramatically since 2008’s recession. Off-price apparel retail, low-price grocery and dollar stores have all spiked in popularity.

But thrift store shopping has more in common with other popular retail models than just the low price. The “treasure hunt” element of the shopping experience that draws shoppers to retailers such as T.J. Maxx is a built-in part of thrift store shopping. With the retailers themselves unsure what product might come in the door, there’s always the opportunity to find something new and different — especially for those shoppers who’ve developed a talent for thrifting.

While thrift store prices are generally low, that’s not always the case. For instance Pets.com CEO Julie Wainwright founded an online consignment shop for luxury goods called The RealReal that she intends to take public. And she is also planning moves into brick-and-mortar, including a possible giant second-hand “superstore,” according to an article on Racked.

Second-hand luxury retail may appeal to a different shopper than either small vintage consignment shops or large national chains and non-profits. But the idea of The RealReal going for an IPO and a big urban brick-and-mortar location raises the question of whether small thrift stores may face new competition from publicly-traded chains as dollar stores have.

Mom-and-pop urban dollar stores, once thought to be impervious to big box disruption, are having to find ways to keep from being undercut by big chains setting up shop. And if shoppers develop a new openness to thrifting, it would seem that big thrift store chains like Savers/Value Village would want to take advantage of it.

DISCUSSION QUESTIONS: Could thrift stores spike in popularity as dollar stores did? What will determine the success of the latest generation of thrift stores and vintage shopping? Would large chain stores prosper in the thrift segment?

Please practice The RetailWire Golden Rule when submitting your comments.
Braintrust
"Thrift stores are absolutely on the rise. Today’s shoppers are much more interested in individuality than having the latest brand."

"Thrift stores are to retail as church bingo is to casinos. Discovery is the name of the game in these heavily browsed environments..."

"The off-price category is one of the hottest segments in retail. The allure of the treasure hunt is even pervasive among affluent demographics."

12 Comments on "Is thrifting going mainstream?"

Second-hand and thrift isn’t for everyone, but I can definitely see it growing in popularity as the income inequality gap widens. The more people who shop thrift, the less stigma it will have. To gain serious traction, thrift and vintage retailers will need to create a shopping experience and store presentation that makes thrift cool — I think there’s a real opportunity for this. Thrift is a very unique space with some interesting advantages (and challenges), and given the right concept and supply chain, I could see a large chain thrift player emerge.

The thrift segment has been experiencing a boom as both Baby Boomers and Millennials embrace the concept of pre-owned. There are two big causes: the popularity of vintage clothing on sites like Nasty Gal and even Etsy as well as mainstream acceptance (“Thrift Shop” by Macklemore) of the thrift store in general, considering the popularity of the entire sharing economy.

I believe we will see more and more thrift stores popping up, as with Dollar Stores, and they could even be the replacements for larger stores that have been shuttered within the malls. If some of the biggest brands were able to operate thrift stores within their stores, it may attract the right audience to give an advantage.

However attractive the challenges are still there, especially with respect to the supply chain as the connections and gathering efforts can be significant, different than what many large chain stores are set up to handle.

Thrift stores are absolutely on the rise. Today’s shoppers are much more interested in individuality than having the latest brand. So finding a quality product at an affordable price is a no-brainer, especially when they can be sure their friend won’t be wearing the same piece. In order for chain stores to prosper they need, of course, a reliable supply source. But they also need to focus on the experiential side of thrifting and give thrifting a digital presence.

Thrift stores are to retail as church bingo is to casinos. Discovery is the name of the game in these heavily browsed environments that give little pain to the pocketbook. Another analogy is to the self-brew wine outlet. Thrift stores, self-brew and many other such examples develop the appreciation for greater quality, which brands fulfill. In using thrift as a shopper transition strategy, large chains would indeed benefit. Thrift also serves as an excellent “farm league” to develop customer-facing human resource talent.

From our research, the resale apparel market grew by 60.6 percent last year. Most of this growth came from players like ThredUp, Poshmark, RealReal and so on. The demographic profile of consumers who use new resale platforms is younger and far more affluent than traditional thrift store shoppers, and they are diverting an increasing proportion of their spend to resale. Their motivations are also balanced: price is a factor, but so too are ethical considerations, the desire to find unique items and the community aspect. These things suggest that resale is more than just a passing fad and will continue to outpace the market for at least a few years to come.

There are thrift stores and there are thrift stores. Where I live, for example, the Salvation Army store bills itself as “Sally’s On Fourth” and boasts a wide assortment of Waterford crystal and other quasi-upscale items. It’s also a go-to spot for Millennial fashionistas and hipsters intent on putting together just the right retro look. There are also thrift stores that are, well, thrift stores in the traditional sense all over the Metro Detroit area. What’s the difference? Merchandising for sure — both in terms of the inventory and how it is displayed. And pricing as well. “Sally’s” has some eye-popping price stickers on things like minks and ermines — nowhere close to full retail at a furrier, but clearly several decimal points above the “$1 a bag,” clothes offered at other shops. To me, thrift stores have even more potential than dollar stores because they have broader inventories, aren’t confined to a single price point and optimize when they are well merchandised. As to whether we need a “large chain” version of the thrift… Read more »
2
|
0
-   Share

The profit margins on off-price/second-hand products cannot be glossed over. Goodwill for example is considered a Fortune 100 company and produce $5 billion in revenue and has grown since the 2008 recession. In Atlanta, Lenox Mall is not the place to be — on the other side of the highway is a shopping complex with Marshall, DSW, Nordstrom Rack and more off-price retailers crowded every weekend.

Off 5th, Nordstrom Rack and Macy’s Last Call are more than enough evidence for retailers to start looking at creating a hybrid inventory of new/used with trade-in options as the new loyalty program.

No, large chains should not install a “thrift section.” No not even in the basement.

Yes, thrift stores will continue to grow as they are relevant to an emerging segment of new family-/new home-formers. It’s not a “could,” it is happening! Do you see the Salvation Army ads in your market? Any Millennials moving out of your home?

Look at thredUP or swap or even eBay if there is any doubt that used items will find a home for those growing up in the “shared economy.”

Millennials are rejecting the consumption for consumption’s sake pursued by Boomers and Gen X. They want their purchases to have meaning, express something about who they are and have a “story” to tell. This is especially true in clothing. Millennials are much more open to eccentric, eclectic and off-trend clothing. Thrift stores actually give them an advantage in buying these types of clothes. Additionally, thrift store clothes come with a story about how they found the item — it’s even better if the item was handmade by a previous generation. Millennials are also attracted to the European approach of clothing — own fewer items, but have them be high quality and timeless. Thrift stores are also a perfect fit for this need. Unlike trends of the past, we don’t see in our research that Millennials will revert to the consumption cravings of their elders. Thrift stores will thrive under this sustained, genuine interest.

There is an endless supply of thrift store product for any retailer to merchandise. It is cheap to procure and the shopper doesn’t expect any beautiful merchandising displays in the stores. Labor is cheaper because you “pile it high and watch it fly,” as opposed to hand stacking/hanging items. I am seeing great opportunity for merchants catering to any economic demographic. Some innovators are already making this a way to augment existing “new” merchandise with “thrifty” draw for an additional shopper audience. Good stuff.

The off-price category is one of the hottest segments in retail. The allure of the treasure hunt is even pervasive among affluent demographics. The Real Real is the “real deal.” With very upscale merchandise and more than 5 million users on their e-commerce site, they are bringing thrifting to some of the wealthiest people in the world, including the Kardashians and Saudi princesses.

Larger chains could extend into the thrift segment; however, it creates some challenges. The thrift segment would compete with its traditional retail offerings and dealing with thousands of suppliers (everyone who consigns merchandise) would be a completely new process that they would need to learn and refine. Maybe leveraging the “vintage” moniker would help move this to the mainstream as well as moving to a consignment model with more sophisticated technology to track suppliers and royalties and automatic markdowns. This segment will be hot going forward!

Social media has made thrifting much more socially acceptable, it also ties in well with the re-cycle re-use movement. I see thrift stores continue to get traction among the fashion set going forwrad.

Braintrust
"Thrift stores are absolutely on the rise. Today’s shoppers are much more interested in individuality than having the latest brand."

"Thrift stores are to retail as church bingo is to casinos. Discovery is the name of the game in these heavily browsed environments..."

"The off-price category is one of the hottest segments in retail. The allure of the treasure hunt is even pervasive among affluent demographics."