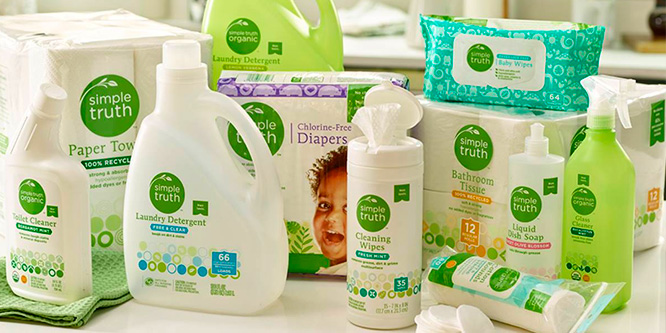 Kroger is looking to make its first overseas move a big one. America’s largest operator of supermarkets announced yesterday that it will test an online store selling its private label goods in China using Alibaba’s Tmall platform.

The retailer has made digital sales and the elevation of its own brands central elements in its Restock Kroger strategic growth plan.

“E-commerce enables Kroger to quickly scale to reach new customers and markets where we don’t operate physical stores, starting with China,” said Yael Cosset, Kroger’s chief digital officer, in a statement. “We anticipate Chinese consumers will love Our Brands — starting with Simple Truth products — just like our American customers do.”

Kroger has worked to step up its digital game in recent years with the expansion of curbside pickup at 1,250 stores and home delivery from 1,200. It recently announced the launch of Kroger Ship, a new delivery service for shelf-stable groceries similar to Amazon.com’s Prime Pantry and Target’s Restock programs. Earlier this year, Kroger signed an exclusive agreement with Ocado to have the British firm develop automated warehouses in locations around the U.S.

Alibaba, according to a Wall Street Journal report, has been actively seeking to recruit U.S. businesses to its Tmall site. In addition to Kroger, Alibaba has succeeded in getting Macy’s, Costco, Gap and Starbucks to sell their products to Chinese consumers.

DISCUSSION QUESTIONS: What do you expect to come out of Kroger’s test of private label sales in China? Is this the beginning of a global expansion for the U.S. grocery giant?

Please practice The RetailWire Golden Rule when submitting your comments.
Braintrust
"Who doesn’t want to access a billion-plus people who are much further along on the digital adoption journey than the U.S.?"

"Wow! This is a huge step for a company that has chosen to not do business outside the US."

"I’m sure partnering with Alibaba will have its share of difficulties but I think the juice will be worth the squeeze for Kroger."

Brilliant move. Who doesn’t want to access a billion-plus people who are much further along on the digital adoption journey than the U.S.? Not to mention, China and Alibaba in particular aren’t quite as concerned about that whole data privacy thing so Kroger should be able to get unbelievable insights on the demographics of their buyers and which products are truly resonating.

What a simply brilliant yet somewhat unexpected move by Kroger. The Chinese market has so much untapped potential, yet there are challenges and barriers to overcome to gain an entryway. In the grocery war chess match, Kroger’s alliance with Alibaba is the perfect strategy to gaining a foothold with China’s billion-plus digital native customers. Alibaba is so mature with their sophisticated all-encompassing digital platform. Alibaba’s reach and scale are beyond comprehension.

The Chinese market is ripe for expansion, and this partnership should reap so many benefits and insights about Chinese consumers for Kroger. I can’t wait to see how this will play out.

This is a smart strategy for Kroger to drive incremental revenue and expand globally with minimal risk. Testing the platform with a select group of products will enable Kroger to measure the success and quickly expand its offering if it’s a success — which is highly likely. Focusing on its private label brands will increases production volumes and drive down product costs.

We will probably see other brands follow Kroger’s lead.

Smart, proactive move by Kroger. I would’ve expected P&G to lead the charge on this but good for Kroger. Accessing 20 percent of the world population offers a brilliant challenge. Accessing this population with and through Alibaba shows that Kroger was thinking well beyond the walls of brick-and-mortar. Everything Kroger learns through this endeavor will make them a significant force to be reckoned with here in the U.S. market.

This is a brilliant idea for Kroger. Tmall helps them get into the world’s biggest market quickly and relatively easily with their established private label brands. No doubt Kroger will gain plenty of great insight from the data they will collect from these shoppers to further fine tune their offering. As mentioned in the article, other brands are following this path to China and we should expect to see many more follow them.

This is an interesting and timely step by the two companies in view of other partnerships between Walmart and JD.com as well as Carrefour and Tencent.

The intersection of retail and technology and the necessity to find new growth and revenue streams are driving these new tie-ups and international expansions. Good move by Kroger to further develop their digital DNA and gain insights on Chinese consumers and their digital habits.

In 2017, the Simple Truth brand represented about two percent of Kroger’s sales and this expansion into China (and beyond) will be a highly visible test of the company’s ability to leverage and project their success in the U.S. to the international arena. This high potential move requires a new mindset at Kroger which appears intent to ignite growth with their “Restock Kroger” strategy.

The amount of knowledge they can learn from this pilot will be astounding. The Kroger data team will get access to raw data depicting buying trends from the Chinese consumer and will be able to build/test their services to perfect them before fully investing in a completely new market.

I’m sure partnering with Alibaba will have its share of difficulties but I think the juice will be worth the squeeze for Kroger.

As the largest retail market (and the fastest growing e-commerce market) in the world, China represents a source of growth for American companies willing to invest in foreign expansion.

Since natural and organic foods, nutritional supplements, and products “Made in the USA” are in demand in China, Kroger gains a competitive edge in a massive, booming market.

Wow! This is a huge step for a company that has chosen to not do business outside the US. Working with Alibaba has the advantage of relying on them for local distribution. Relying on them for distribution puts part of your reputation in their hands. Working with Alibaba will make relations with the Chinese government easier. Not having to invest in retail locations is great. Focusing on Kroger’s own brand allows Kroger the freedom to do the test with a singular focus. This will be a great test to watch.

Cross border selling to China represents more or less the revenue of Kroger company … definitely sizable enough. Recent Chinese regulation changes no longer give tax exemptions to foreign products so that might curtail some of the sales. There are already several global retailers selling their private branded products through similar platforms into China. It will provide more scale to Kroger’s private brand program so definitely a sensible move.

Nothing to lose, I s’pose, but honestly, this isn’t what I think of when I think of iconic American brands … the ones that presumably would have the best chance in the Chinese market. Then again, maybe anything with its label in English will sell.

This is likely to be quite successful in the short term. Although Chinese brands are making huge strides in reliability and safety, there is still a large percentage of Chinese consumers who would rather access well known American, European and Aussie/Kiwi brands if the price is reasonable. And, Alibaba is a brilliant digital marketer who will make all the right moves to ensure excellent exposure to the right Chinese consumers.

As I said, however, Chinese brands have been making huge strides and the fact is that the Chinese consumer really doesn’t need Kroger’s products. There are excellent, safe Chinese products specifically designed for the Chinese consumer growing more and more popular all the time. Once these brands’ reputation for safety and reliability reach a tipping point, many non-Chinese brands, like Kroger’s Simple Truth (designed for American consumers) will lose out as they will be unable to adapt as readily nor priced as well as the Chinese alternatives.

For the next 2-3 years, this should be a winner for Kroger.

Braintrust
"Who doesn’t want to access a billion-plus people who are much further along on the digital adoption journey than the U.S.?"

"Wow! This is a huge step for a company that has chosen to not do business outside the US."

"I’m sure partnering with Alibaba will have its share of difficulties but I think the juice will be worth the squeeze for Kroger."