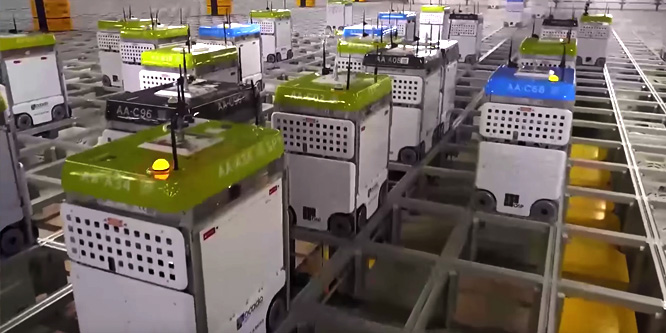 When Sobeys announced in January that it had signed a deal to have Ocado, the British e-grocer, build and operate an automated warehouse in Canada, one of the logical questions was whether a U.S. chain would soon announce a similar agreement. Today, the question was answered in the affirmative as Kroger announced it has reached an exclusive U.S. deal to have Ocado develop automated warehouse facilities for its business.

“We see Ocado as an innovative, exciting and transformative partnership in pursuit of our Restock Kroger vision, to serve America through food inspiration and uplift,” said Rodney McMullen, Kroger’s chairman and CEO, in a statement. “We are actively creating a seamless digital experience for our customers. Our partnership with Ocado will speed up our efforts to redefine the food and grocery customer experience — creating value for customers and shareholders alike.”

The two companies are currently working together to identify the first sites to develop new, automated warehouses for Kroger this year. The companies plan to identify as many as 20 such locations for the same purpose over the next three years.

Kroger CFO Michael Schlotman told CNBC’s “Squawk Box” that the deal with Ocado is not just about the retailer’s online business.

“They have capabilities that will also help us provide piece pick items to our stores so that will help our logistics,” he said.

Kroger’s deal with Ocado is exclusive for the U.S. and is intended to enhance Kroger’s “digital and robotic capabilities.”

Ocado, which operates Morrison’s online business in the U.K., has struck deals with Groupe Casino in France and ICA Group in Sweden in addition to those with Sobey’s and Kroger.

DISCUSSION QUESTIONS: What will the Ocado deal mean for Kroger’s businesses across the U.S.? Do you think retailers that compete with Kroger will seek out similar deals to automate their warehouses?

Please practice The RetailWire Golden Rule when submitting your comments.
Braintrust
"Automated inventory/pick and pack at this level is a competitive boost and the exclusivity raises them an extra couple of notches. "

"We have entered the age of strategic collaboration as a cornerstone for survival."

"Terrific move by Kroger in securing the U.S. exclusive with Ocado to assist in their continued online evolution. "

This is a big deal. Ocado has really awesome technology that works. Kroger has been impressive in its efforts to explore innovation and stand up to threats from Amazon and Walmart in grocery. Automated inventory/pick and pack at this level is a competitive boost and the exclusivity raises them an extra couple of notches.

If it lives up to its promise and is implemented well, the benefit to stocking stores is very powerful too. Right now, Whole Foods’ new inventory approach (as we’ve discussed here) is not working well for consumers, so there’s potential for Kroger to leverage the Ocado technology and create a better experience.

The losers are the smaller chains that are always trying to play catch-up. Without the funding to access leading-edge technologies on the logistics side (well everywhere), they are going to be ever more marginalized as online grocery and home delivery heats up.

Automation is increasing, and the trend will continue. I see Kroger’s investment in Ocado as a natural step and yes other retailers will follow because of the cost savings, efficiency and ability to deliver products faster and more accurately. However, businesses have to be careful going forward choosing where they will rely on technology and where they will maintain a human presence. Too often we read today how a company is quick to claim that an investment in technology will help the customer experience yet, in reality, it does very little to impress the customer — in fact it often infuriates them because they find themselves dealing with a computer rather than a human. Technology will continue to offer many great conveniences throughout the next decades, but the balance of what is best for the company and what is best for the customer must be looked at carefully.

I want to make it clear that my reason for recommending Kroger to invest in Ocado’s technology and distribution modules is to reduce costs and complexity but more importantly, Kroger can expand into the states where they don’t have a presence by opening customer fulfillment centers.

Warehouse efficiencies will continue to include more automation and Kroger’s ability to deny its competitors this Ocado capability reflects what can become part of using technology as a competitive tool.

The last mile starts in the warehouse. To be nimble and offer personalized service requires automation at the source. This is especially true in home delivery of groceries. But as the article points out, click and collect at stores is requiring increasing precision and speed. Retailers, even ones the size of Kroger, do not have the resources, talent and systems to be able to do it all internally. We have entered the age of strategic collaboration as a cornerstone for survival. Kudos to Kroger for seeking collaborative solutions today that will be required for survival in the future.

I can see this being beneficial for general warehouse technology, but it will be fascinating to see how it works for home delivery.

Ocado’s model kind of works in the U.K. because the U.K. is a relatively small island with high population density. As such, the catchment area of one warehouse contains many households. However, even here Ocado is not particularly profitable!

The U.S. is not like that. There are urban areas where the model will be similar, but most grocery fulfillment in other locations can only really be done from stores.

I applaud Kroger for testing new things — but while I believe grocery fulfillment is a necessity for driving sales, it is damaging to profits. The Ocado model does little to change that.

Terrific move by Kroger in securing the U.S. exclusive with Ocado to assist in their continued online evolution. This is a classic example of build versus buy. Build where you are strong and Kroger is dominant in the brick-and-mortar space. Buy where you are weak. Kroger recognizes the lead enjoyed by Amazon and others in the online space. This deal begins to close the actual gap as well as the knowledge gap.

Kroger’s decision to invest in automated fulfillment centers for online grocery will be massively influential. I suspect today’s announcement sends chills down the spines of supermarket executives who have committed to click-and-carry strategies with in-store order fulfillment.

For Kroger, however, this is not an either/or proposition. As of December, it already offered its ClickList online ordering in more than 1,000 stores. There are excellent reasons why a large competitor would invest in both approaches simultaneously.

I imagine it may also enable a “hybrid” strategy, where center-store items are rapidly picked at the fulfillment center and shipped to stores where they are combined with perishable items and readied for shopper pick-up.

Automated warehouses are becoming more and more necessary these days and it’s a good move by Kroger to now have access to a proven technology that’s on the leading edge. It’s all in the implementation and it’ll be no small task to work this into the supply chain processes of the largest grocer in the U.S. That said, they are a step ahead of much of the competition and I think it’s only a matter of time before others are striking deals to catch up.

Warehouse automation can drive efficiencies. It remains to be seen if it can help a high-SKU retailer like Kroger. Should it be successful, it will provide a competitive advantage and spread to others as well.

Ocado are a very efficient operation and are now seen as the leaders in the home delivery operations for grocers. It is interesting that they are turning themselves into a solutions company rather than an operations company and this will certainly help their profitability and market cap. Following on the news about Target’s initiative to aggressively attack the home delivery market, this shows that Kroger is also gearing up and taking the sensible route of sorting out their operations before launching the marketing initiative that could cause serious problems further down the road.

This is becoming a battle ground and these huge retailers will be slugging this out for some time to come, which is great for the consumer until the weaker retailers drop out and prices have to go up to cover the extra costs. It is going to be interesting to see who the winner in all this is — one who certainly is already a winner is Ocado!

Braintrust
"Automated inventory/pick and pack at this level is a competitive boost and the exclusivity raises them an extra couple of notches. "

"We have entered the age of strategic collaboration as a cornerstone for survival."

"Terrific move by Kroger in securing the U.S. exclusive with Ocado to assist in their continued online evolution. "