Does Sobeys deal mean the U.S. is next for Ocado? 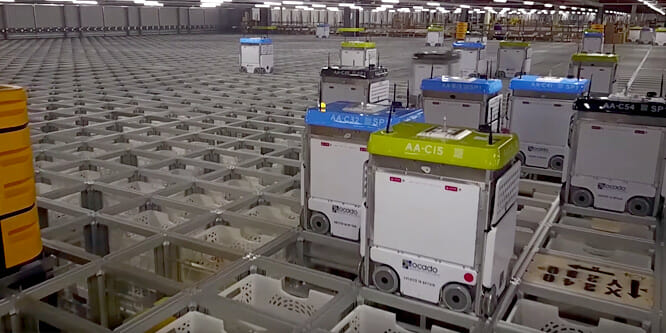 Ocado has its sights set on the world. The British e-grocer announced its second deal in less than two months outside the U.K. to build and operate an automated warehouse for a traditional supermarket chain.

Canada’s Sobeys announced earlier this week that Ocado will build an automated warehouse and develop a website and mobile service to expand the national grocery chain’s online sales. The two companies plan to assess the value of adding more warehouses in other parts of Canada. Sobeys operates more than 1,500 stores across the country.

“Sobeys intends to play to win in Canadian online grocery shopping. We are very excited to bring this best-in-the-world grocery e-commerce experience to Canadian customers,” said Michael Medline, president & CEO of Sobeys, in a statement. “This unique and innovative Sobeys and Ocado experience will offer consumers the biggest selection, freshest products and most reliable delivery available anywhere on the planet. Our end-to-end e-commerce solution will allow Sobeys to build an online offer in a manner that is profitable and creates exceptional value for our customers, investors and supplier partners.”

The deal with Sobeys marks the third relationship with a major traditional grocery chain for Ocado. It also has a deal in place with Morrisons in the U.K., and in November Ocado announced plans to build a warehouse for Groupe Casino in France.

Having made its way to North America, many wonder when a deal will be announced between Ocado and a grocer in the U.S. In July, according to Bloomberg, Ocado began talks with unnamed American grocers about licensing its platform. The talks were spurred by Amazon’s acquisition of Whole Foods.

DISCUSSION QUESTIONS: Would the Ocado platform work for supermarket chains in the U.S.? Do you see any likely candidates that you think would benefit from a deal with Ocado?

Please practice The RetailWire Golden Rule when submitting your comments.
Braintrust
"2018 may be one of the biggest years for strategic collaboration, mergers and acquisitions that enable automation of the supply chain."

"The Ocado model is interesting and impressive. However, Ocado was not profitable for many years and still doesn’t deliver a great return."

"It’ll be interesting to see if they can make something work in less populated regions."

6 Comments on "Does Sobeys deal mean the U.S. is next for Ocado?"

The Ocado model is interesting and impressive. However, Ocado was not profitable for many years and still doesn’t deliver a great return.

The expense of the investment, coupled with the low margins of groceries, means it requires massive volumes to work. Moreover, that volume needs to be within a relatively small geographical area to ensure efficiency.

The low density nature of much of the U.S. makes it unsuited to the Ocado model. Certainly it will work in cities and high-density areas — but those are precisely the locations already well served by online grocery offers.

The Ocado platform will work for U.S. supermarket chains and a number of other retailers. 2018 may be one of the biggest years for strategic collaboration, mergers and acquisitions that enable automation of the supply chain to improve e-commerce efficiency.

While customers crave convenience, they also highly value choice. A platform in itself does not generate customers or brand loyalty.

The automation approach will work best with a grocer of major scale, like Kroger or Walmart. This could help refactor store design by allowing automated warehouses to handle the “click and pick” models, therefore reducing overall square footage and ensuring the revised design is more customer experience-focused, efficient and effective.

Just a matter of time until Ocado comes into the US. eCommerce and the fulfillment thereof is a strategic requirement, and Ocado has an approach that looks to be working. I’d be surprised if they weren’t already in conversations with US retailers as it is something that I’m sure the Street would look favorably on. As a model that works best for high-density areas, it’ll be interesting to see if they can make something work in less populated regions.

I cannot see how these robots are able to work faster than a human sorter. The grid layout is basically a primitive navigation design, and one also has to consider traffic. Package sorting similar to UPS or FedEx to bins by human sorters can easily outperform this process.

While the system looks impressive, I’m just not sure how easily it can be applied to serve US markets. The implications for me are that a high density is required to make this cost effective at large scale. That could work in the US in certain regions, but then, is it really solving a problem in those regions for online grocery fulfillment? Or is it a solution in search of a problem. It will be interesting to watch the Canadian deployment and see how this can be applied to the US.

Braintrust
"2018 may be one of the biggest years for strategic collaboration, mergers and acquisitions that enable automation of the supply chain."

"The Ocado model is interesting and impressive. However, Ocado was not profitable for many years and still doesn’t deliver a great return."

"It’ll be interesting to see if they can make something work in less populated regions."