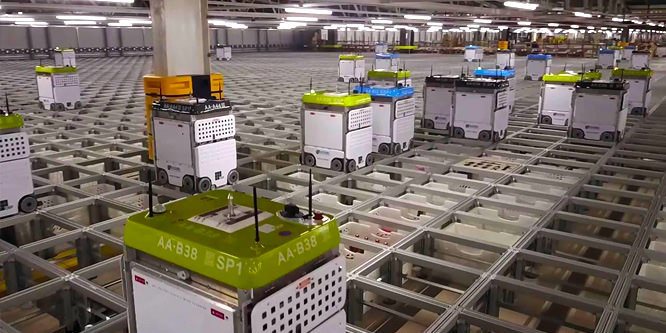 There is the type of automation that leverages robots to make people’s jobs easier, and then there is the kind that, through combining technologies, does away with human intervention entirely. One online UK grocer is aiming for the latter with its warehouse picking operation — and it may be getting close to succeeding.

Ocado, the world’s biggest online-only grocer, has devised what a recent Forbes article describes as a “hive” filled with groceries in its warehouse. The football field-sized, three-foot high block of groceries is made up of thousands of stacked plastic boxes filled with different products. Hundreds of robots use machine intelligence to navigate the hive, shifting boxes and automatically picking orders. The only human job in the warehouse is that of baggers, but Ocado intends to do away with that side of the operation eventually. The company is preparing robots with softer “hands” that can carefully handle fruit for its new, larger warehouse.

Grocers have struggled with e-commerce, despite other segments experiencing huge growth in recent years. While e-commerce is projected to approach a quarter of all retail sales in the next decade, according to FTI, online grocery is only expected to expand from its current two percent of marketplace penetration into the mid- to high-single digits in the same timeframe.

Even Amazon has experienced difficulty in the space, having recently rolled back its AmazonFresh grocery delivery service in some markets. The move reignited longstanding questions about the feasibility of profitably offering grocery delivery at scale.

Whether next-gen warehouse automation will mitigate grocers’ e-commerce difficulty remains to be seen. But Ocado is also working to automate other parts of the process, for instance with driverless delivery, in hopes of lowering labor costs, according to Forbes.

DISCUSSION QUESTIONS: Will automated picking solutions like Ocado’s make online grocery more feasible for U.S. retailers? Do you expect to see U.S. grocers using Ocado’s platform or something comparable in the next few years?

Please practice The RetailWire Golden Rule when submitting your comments.
Braintrust
"It's feasible, but only if somebody gets past the R&D investment phase and reaches a point of commercial viability."

"The automation gets the groceries to the delivery dock. From there, it’s a person in a car (at least for the next couple of years)."

"...many employees will lose jobs and the few employees needed to monitor and fix problems will require special training and skills."

Automated picking may make online grocery more feasible, but it won’t make more consumers adopt it. Consumers want to feel the produce and select their cuts of meat. It’s not a matter of convenience. It’s a matter of trust.

I just saw a demo of a competing product yesterday. It may solve some of the labor problem … some.

I’ve been using Instacart for the past few months and am getting really tired of the mis-picks and strange produce choices (a crown of broccoli that would feed a family of mice, among others). I am more pessimistic about delivery of consumable grocery products (beyond cans and paper goods, which are hard to screw up) than I used to be. It’s annoying.

Ocado’s warehouse technology is excellent: it improves efficiency and speed, and reduces mistakes and wastage. It also increases the number of orders that can be serviced in any given period. There is no doubt in my mind that we will see more of this sort of automation.

However, Ocado is not particularly profitable (and for many years was loss-making). The reason for this is that no matter how efficient the warehouse, the cost of delivering direct-to-home is extremely high. Given that the consumer does not bear the full cost of this last mile, it depresses profits.

Compared to the UK, the U.S. has a much lower population density which means that, in many non-urban areas, the relative costs of delivery would be even higher. And therein lies the real problem with grocery home delivery.

The last I checked, Whole Foods was a struggling operation and put itself on the market for the Amazon acquisition. Why is there revisionist history that Whole Foods and Amazon merged to create formidable competition in the marketplace?

I see the sell-side but where is the buy-side to all of this automation of robot pickers? How will these imaginary grocery customers keep jobs if they are replaced by robots?

Grocery shopping is a primal hunter/gathering activity of human beings. People will continue to shop for their food the same way a household male cat wants to mark the furniture. This dynamic will never change.

It’s feasible, but only if somebody gets past the R&D investment phase and reaches a point of commercial viability. Part of the problem here is this area of robotics is still underdeveloped against other areas like robotic assembly plants where fewer development dollars are needed. As for the second question my vote is for “something comparable.” I’m not sure Ocado is going to survive. Now, will it work in large, regional warehouses? Why not? Of course, the one thing we haven’t discussed is employee pushback and the politics of human displacement. That may prove more daunting in the end than the technology.

If all of grocery shopping were the center store, this would make a lot of sense. And maybe that’s how e-commerce plays out for grocers. The grocery store of the future: center store goods gets replenished at home automatically with weekly shipments from a warehouse or back of store and smaller, “fresh only” stores replace the behemoths that now exist. The fresh only stores would also be experiences you’d want to have; great customer service, environment and product.

Hey, you may call me a dreamer, but I’m not the only one. Happy Thanksgiving.

Ocado is a fascinating study in online grocery tech, but it has put all its eggs in the centralized fulfillment and delivery basket. No click and collect here. Automating the picking process with a robotic “hive” follows naturally from that choice, but it’s evidently capital intensive. We’ve seen a similar movie before — when Webvan constructed a massive automated fulfillment center in the East Bay area across from San Francisco. Only this time the automation mechanism is robotics; last time it was computerized conveyor systems. Ocado’s model has potential in densely populated markets, where delivery vans travel short distances and make multiple stops before returning empty over short distances. This could disqualify it from many U.S. markets, where distances and geographic obstacles like bridges may mean long, unprofitable drives home by empty vans. The investment required to build a robotic “hive” is a leap of faith about which many grocers should be wary. How may orders must be filled and delivered to earn enough incremental profits to pay off the mortgage? As a self-professed retail… Read more »
2
|
0
-   Share

The automation gets the groceries to the delivery dock. From there, it’s a person in a car (at least for the next couple of years). So, maybe the automation streamlines the picking process. It’s still a matter of the delivery, where it’s delivered (on a porch, dropped inside or handed off to the customer). That is where the friction point with online purchase and delivery resides.

I’m actually thinking about all the distribution centers around the world that still have manual labor selecting the product to be shipped to stores for store stock, as opposed to online consumer orders. That is the primary place to install robotics. Then we can think about online order fulfillment robotics. First things first.

Possibly this will solve a problem of creating efficiency in picking products — depending upon how low error rates and the amount of damaged goods goes. However, there is the same issue all companies using robotics face — many employees will lose jobs and the few employees needed to monitor and fix problems will require special training and skills. Dealing with churn is never easy so the gain of using robotics needs to be high.

I’m unclear on how a concept that’s dependent on a stadium sized warehouse will help much with grocery. Are they to be built in the middle of every urban area? Or is this only for non-perishables, and they will be sent out from some central warehouse(s)? If the latter, then I think time-of-delivery may be an issue.

One dimensional solutions can never really be the solution. So this is interesting. But far too often things like this are solutions in search of a problem. Having overseen a lot of fulfillment in my career, I’m skeptical that it can deliver anywhere near what’s promised.

In part, we have to remember that while staff is costly, so is equipment like this. And so is downtime when the equipment fails. And so is upgrading, maintenance, and fixing problems.

That said, as a former tech geek, it’s quite cool looking. But my time in tech has also made me into a healthy skeptic — prove that it really delivers value and not just replaces without improving.

After all, remember when we were going paperless…in the 1980s? And the paperless effort simply led to…more paper? Interested skepticism is appropriate.

Braintrust
"It's feasible, but only if somebody gets past the R&D investment phase and reaches a point of commercial viability."

"The automation gets the groceries to the delivery dock. From there, it’s a person in a car (at least for the next couple of years)."

"...many employees will lose jobs and the few employees needed to monitor and fix problems will require special training and skills."