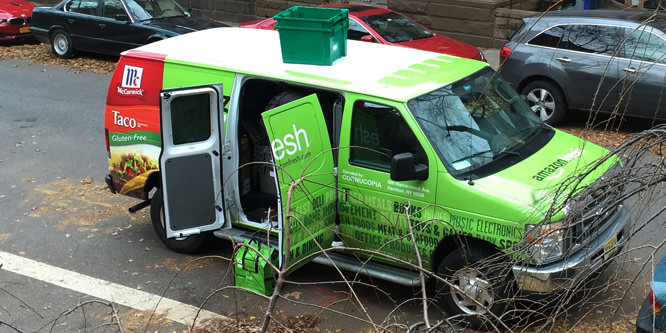 Amazon.com’s acquisition of Whole Foods in August led many to speculate that the move would serve as a jumping off point for the company to expand its AmazonFresh delivery service. Instead, reports surfaced last week that Amazon sent notices to customers that it is ending home delivery of groceries in some areas.

An Amazon spokesperson confirmed to Recode that the company will end the service in some places, but said it would continue serving other neighborhoods in cities including Boston, Chicago, Los Angeles, New York and Philadelphia. Amazon did not offer insight as to whether it intended to return in the future to areas where it is ending AmazonFresh deliveries.

Online grocers going back to Webvan have had trouble achieving profitability and Amazon’s pullback suggests that it too is facing hurdles. One potential response would be for the company to open AmazonFresh Pickup locations like the two it operates in Seattle’s Ballard and SoDo neighborhoods.

DISCUSSION QUESTIONS: What do you make of Amazon’s decision to end AmazonFresh deliveries in some areas? Do you expect Amazon will find another approach to fresh groceries in the areas it is leaving? Will other grocers expand or pull back on home deliveries on this news?

Please practice The RetailWire Golden Rule when submitting your comments.
Braintrust
"There are some markets that simply do not offer the population density required to profitably deliver groceries. "

The economic challenges of offering fresh grocery delivery in some markets explains why Amazon felt compelled to buy Whole Foods, and why it is developing new fresh pickup models. There are some markets that simply do not offer the population density required to profitably deliver groceries. Amazon realized that by continuing in those markets it would have been throwing good money after bad.

Grocery delivery by e-commerce companies has always been a treacherous proposition. Webvan and others lost tens of millions of dollars trying, and failing, to create profitable online grocery businesses. This pullback by Amazon highlights the financial difficulties of grocery delivery. Amazon has rarely been afraid to experiment with new services and products. They are smart enough to cut bait if a program or product does not deliver desired results. I’m sure they are cooking up new ideas to make grocery shopping easier. Never count Amazon out.

Delivering perishables is going to be the last domino to fall in a digital world. Consumers still want to select their own meat, produce and bakery products because everyone has a different preference.

But I think Amazon has learned, and knows, a tremendous amount about how consumers shop. I believe this is a “step back and re-organize,” not an abandonment.

I am sure the Whole Foods acquisition is a part of a revised strategy.

This could simply be evidence of the way Amazon operates. Test and learn only works if you take action based on what you learn, and perhaps they are cutting their loses. If this is the case then no doubt they will be thinking of new, more cost effective ways to service these communities. As well as the pick up locations mentioned, they have been experimenting with deliver-to-trunk (of your car) and new doorbell home entry systems — though this won’t work for perishable goods.

If consumers are willing to invest in the required home entry systems and trust Amazon to enter their homes, they may be willing to trust them to select their perishables and put them in the refrigerators and/or freezer.

Not unlike almost any business decision, Amazon’s decision to scale back AmazonFresh deliveries in some areas is based on the numbers. The cost of delivering simply outweighed the rewards — financial and in terms of brand equity. I suspect in concentrated urban population markets like New York, Boston, Chicago and Philadelphia, where demand is high and distances between clients is close, the deliveries/hour provide a viable and sustainable ROI. Amazon will continue to experiment and vet business models that are sustainable and are expected and valued by their customers.

Grocery delivery has never been profitable. Even for very established companies, like the UK’s Tesco which uses a pick-from-store model, it is margin depleting.

Amazon’s pullback likely reflects that it cannot make the operation profitable in some locations and is not getting sufficient volume uplift to justify keeping it going.

Is this the end of Amazon and grocery delivery? Not at all. I fully expect them to try and test new models, including a more integrated operation which incorporates their Whole Foods stores.

It’s not surprising to see these developments, as one of the main drivers of the Whole Foods acquisition was to mitigate the last mile of online fulfillment.

Considering that there are some overlaps between the Amazon Direct organic product offerings and Whole Foods’ go-to-market holistic assortments, perhaps Amazon is mitigating any potential cannibalization as they go all-in with this new acquisition. The Amazon Lockers have started to appear within the Whole Foods stores and the Alexa devices are now omnipresent throughout the produce areas.

The brilliance behind the Whole Foods acquisition is the potential of leveraging the store as a fulfillment center, partnering with Lyft/Uber to deliver to local areas same day and expanding beyond that.

Amazon is facing a number of problems. No one is making money on home delivery when you apply honest accounting. Whole Foods (Whole Paycheck) produce is higher priced and organics have lower eye appeal. Whole Foods has a multiyear agreement with Instacart which is direct competition. Whole Foods does not have the physical capability to support a significant expansion. Finally, what is the strategy? Home delivery of fresh product (meat, produce, dairy) or all food products?

The likely answer is that Amazon realized the required investment is greater than they anticipated.

Much of Amazon’s success is down to the approach of its founder, Jeff Bezos. Under his leadership, Amazon has constantly experimented with different approaches to gain market share and drive the business forward. So this week’s announcement that the tech giant is to end its AmazonFresh home delivery in some areas in the U.S. should not be read as a big change in strategic direction. It’s a typical Jeff Bezos “fail fast.” If past decisions are anything to go by, Amazon are just testing the water, shutting something down quickly as soon as they know it’s going to fail. Because what we do know for sure is that Amazon is determined to crack the online grocery market, and before long we’ll see a new, improved approach to last-mile fresh food delivery from Amazon. Amazon hasn’t properly rolled out drone technology yet, and that could be the next thing it trials on a wider scale with food deliveries. Alternatively, it may choose to acquire a solution, bringing on board a company in the market that already… Read more »
1
|
0
-   Share

This seems like the embodiment of fail fast to me, which is the best philosophy to have today, especially for retailers. Just because they were not successful in certain markets doesn’t mean they won’t try again in a different manner (AmazonFresh BOPIS, for example) in the exact same markets. Regardless, home delivery or pick up is the future for grocery so, it appears they have enough information to change course in some fashion. But as usual with the 900-pound gorilla, it’s hard to tell where they’ll go from here. Drones?

Delivering on the promise is hard. Maybe AmazonFresh has learned that technology and scale can’t overcome certain realities that in this instance are quite literally “on the ground.” The hard lessons of Webvan echo in this context: superior order-taking and fulfillment are poor antidotes for low-density delivery routes, geographical obstacles and long return trips by empty vans.

In a nutshell, this is why click-and-collect makes better practical sense for the grocery category in most communities. Walmart and Kroger clearly understand this already. Amazon seems to get that Whole Foods provides an instant network of branded pickup locations. Considerable operational refinements will be needed to make this work, but Big A can afford to experiment.

I think this is a classic case of three of my rules of strategy:

Amazon has had some economic and logistics challenges with AmazonFresh. I think this move is partly related to its efforts to get alignment with Whole Foods (focusing). Similarly, instead of diluting its resources across several initiatives, it is concentrating on Whole Foods. Finally, it has stepped out with AmazonFresh (advancing) and now it is rolling back somewhat (securing) — still in major cities.

I don’t see this as an abandonment of the concept — only a pause.

Amazon simply has a much sharper pencil than Whole Foods and is way less service oriented in its mentality. So the higher cost of serving lower population density areas won’t be tolerated because of its negative impact on margin. This decision begins the process of questioning how well Whole Foods will fit into the Amazon matrix.

The idea of higher service levels, greater product quality, and interesting product surely has a place. Home delivery surely fits within a retailer offering these high-end attributes. Whether any of the regional chains will try and move up into this space is doubtful. More likely that a local player will occupy this “high-end” niche.

This is not surprising to me, as perishable deliveries are quite expensive. Amazon does not have the “Joe the Butcher” loyalty many customers have with their favorite store that does custom fresh meats and deli. It is one of the reasons I am still in this business. We have a following of people who count on us to give them fresh custom meats and deli, whereas Amazon delivers something from a third party supplier that has a much higher cost, without the custom cut the customer may desire.

That is where an independent can continue to grow their business, as dry grocery is sliding backwards every year. Push the perishables, and if you do it right, the customers will stay loyal to your brand, and thank goodness for that.

Amazon, or perhaps anyone, cannot make money on home grocery delivery while offering cutting edge pricing. The two features (low prices and premium home delivery service) contradict each other and do not support the same business model. This has been proven over and over again, and the low margins of the grocery industry make this almost impossible from the start.

Thanks Kai for the reality check. I deliver catering (with a fee) and if I were to do more, it would be a platform base that offers gourmet and fresh all at regular price, plus a small fee. You can’t deliver $2.99 Oreos and 99 cent gallons of milk, so controlling the selection offering is critical if anyone is ever going to make money at it.

Braintrust
"There are some markets that simply do not offer the population density required to profitably deliver groceries. "