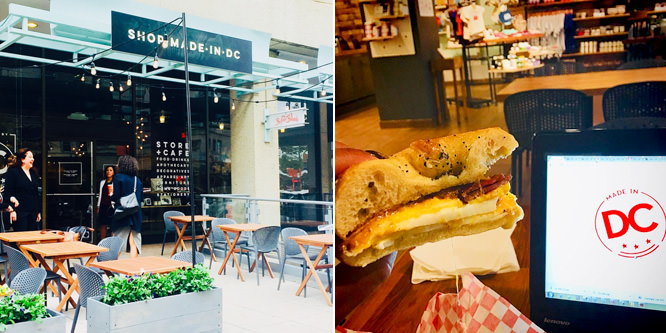 Pop-ups keep getting more popular. Now one location is using the retail model to rethink an already popular type of brick-and-mortar experience — the café.

A store concept called Made in DC, featuring a café with a rotating lineup of local vendors, is opening in Washington D.C.’s DuPont Circle, according to Eater. The restaurants involved at the outset include Bullfrog Bagels for breakfast offerings, Small Planes Coffee, Tibetan restaurant Dorjee Morno and taco restaurant Tortilladoro. There are 24 total vendors listed as participating in the first iteration of the café. In addition to food, there are also local stationery, jewelry and furniture companies with space at Made in DC.

While it’s not clear how often vendors will be swapped out, the vendor list is titled “October 2017 Makers” indicating the possibility of at least some monthly changes.

The Made in DC café recalls the popular model of downtown areas with food trucks swapping locations on a semi-regular basis. And the concept is not the only recent example of using a single space as a home for multiple pop-ups. In Long Island, shopping mall Roosevelt Field launched Edit@Roosevelt Field, a 3,500 square-foot space broken out into 20 to 200 square foot sections of rotating brands that are otherwise online-only. And in Detroit earlier this year, a local tech accelerator opened a rotating pop-up retail environment meant to highlight local companies.

Setting up a single retail space full of rotating pop-ups has been touted as a potential road to renewed relevance for declining brick-and-mortar retail spaces like shopping malls. In fact, pop-up retail has grown so popular that last year a startup named Storefront, Ltd. launched a marketplace to let retailers looking to run pop-ups easily find short-term spaces to rent.

But there’s another side to the pop-up boom. As the model has come into vogue, prices for pop-up rent have increased. In some cases, the prices of short-term pop-up leases have begun to rival that of long-term leases.

Eater did not report what vendors must invest to be featured at Made in DC.

DISCUSSION QUESTIONS: Do rotating restaurant pop-ups offer as good of a prospect to local brands as non-food retail pop-ups, or do they face bigger challenges? Is this the right way to extend concepts like food trucks and how can the restaurants and other retailers best leverage it to succeed?

Please practice The RetailWire Golden Rule when submitting your comments.
Braintrust
" It’s an experience economy. This concept keeps the experiences and choices fresh and the customers anticipatory. "

"Driving traffic to a mall with ever new, changing “pop up” tasty food offerings is a no-brainer."

"It’s like going to a show. Check the schedule to see what’s playing. Or, in this case, what’s for lunch."

11 Comments on "New pop-up concept is a capital idea"

This is a very creative idea. I can see some interesting promotional opportunities with ever-changing restaurants in a specific location. It’s like going to a show. Check the schedule to see what’s playing. Or, in this case, what’s for lunch. When a new restaurant comes to town, the lines are long, anticipation is strong and excitement is at a high. If this can be repeated every few days or weekly, then you’ll have an ongoing schedule of food “events.”

Rotating food pop-ups for local brands is a good and relatively inexpensive way for a newcomer to make a splash and get itself introduced rapidly. There is a danger that rents could get too high for many of these businesses and landlords should be aware and sensitive to the fact that the attraction to the pop-up model is the speed and ease (affordability) to market.

Food pop-ups are a great idea, and not one that is new to D.C. Pop-up bars have been extremely popular in D.C. this year, including a Game of Thrones pop-up, a Halloween-themed Pub Dread pop-up, a Super Mario Bros pop-up and more. I think for any pop-up to be hugely successful, whether food or retail, it should focus on some type of theme or event. In other words, it shouldn’t be the same products or experience that customers can find at the retailer’s brick-and-mortar location or online store.

This model makes sense, not only for restaurants but for hardgoods as well. It’s a local version of Costco where food choices change — making the location a destination for the local community seeking to experience and discover new menu items and choices. It’s an experience economy. This concept keeps the experiences and choices fresh and the customers anticipatory. If done well, shoppers will seek to discover what is next. They will say; my last visit was outstanding, what experience will next month bring?

This sounds like the “food hall” concept which is the pop-store version of food trucks and pop-up stores. There are several cities building up this concept for year-round support of foodies.

Revolving pop-ups are critical to a local economy. Nothing is more economically devastating than the closure of a retail business, loss of local work and the vacancy period before a new retailer moves in. Creating a revolving pop-up to keep new retailers moving in and out is going to be the new paradigm.

“New” is always exciting. However, if the retail brand is compelling to begin with, there’s no need to change the store to another retailer. I’m sure we can think of several retailers that command attention even though they’ve been around a long time. This popup trend does give the new retail brands a chance to gain awareness, and I’m hopeful that many become permanent fixtures in malls around the country.

Pop-up stores, pop-up restaurants and food trucks are disruptive retail solutions that enable independent brands and small businesses to move from online-to-offline, test new channels, build new customer bases and innovate on a small scale. For the consumer, engaging with a fresh new food, product or service is exciting and due to the short-term nature, an exclusive opportunity. Looks to me like a win-win. This is just the beginning of where we see retail heading at Gustie.

Coming from the city of food carts, and a city which has played with rotating local food at the airport, I’m not thrilled about this idea for food. In my experience, after just becoming loyal and testing one restaurant, they shift to another one — one without a menu that I like — and I’m left a very disappointed customer. “Buy local” efforts, like our Made in Oregon store, can be highly successful with products because they can stock far more products meaning they can rotate new in without losing the tried and true. That doesn’t work for restaurants — where it’s a small number and tends to be “all or nothing”. As a final thought, this works against what has proven successful for food trucks — building a loyal following who knows they can always buy lunch at the same corner and get the same quality food. If there were a way to make it a sampling effort rather than pop-ups, perhaps there’s value. But with food trucks it’s not usually the well funded… Read more »
0
|
0
-   Share

The pop-up concept is gaining popularity as a reflection of what consumers really want — more variety and unique experiences. The “same old same old” approach of many brands is wearing thin with modern consumers. Pop-ups allow brands to remain fresh in the eyes of consumers and this applies to merchandise stores or restaurants equally. I expect we will see more and more of this as a strategy to promote a unique brand and drive traffic.

Everyone likes to eat! Many people love Food Network. People are pre-disposed to prefer “hip, new food vibes”… Foodie culture. Driving traffic to a mall with ever new, changing “pop up” tasty food offerings is a no-brainer.

Restaurants are notoriously difficult to launch, and the pop-up concept here provides restaurateurs with a natural proof-of-concept tool before moving on to a larger, more permanent platform. Beyond that, it allows smaller entrepreneurs to have a seat at the table, which is always a positive move whenever it happens. The pop-up concept, whether for restaurants or retailers, is growing in popularity, and not only provides consumers with more variety, it can be a fundamental tool for economic growth in an environment where cities are seeing empty space in what used to be popular retail areas.

Landlords will be quick to catch on to the popularity of this trend, but they must be aware that this type of client is very different from leasing space to a big-box retailer. The landlord, in order to have a more successful pop-up clientele, must be more than a purveyor of square feet, they must become a facilitator of entrepreneurship. Raising prices too quickly would kill a good idea before it had a chance to take hold.

Braintrust
" It’s an experience economy. This concept keeps the experiences and choices fresh and the customers anticipatory. "

"Driving traffic to a mall with ever new, changing “pop up” tasty food offerings is a no-brainer."

"It’s like going to a show. Check the schedule to see what’s playing. Or, in this case, what’s for lunch."