Will pop-up only malls catch on? 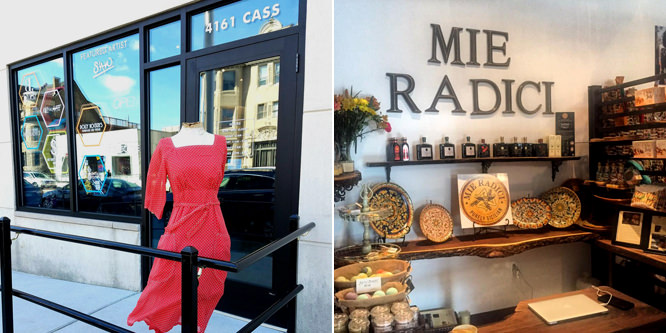 Whether at big events or as limited-time, seasonal attractions, retail pop-up stores have grown in popularity as other more traditional brick-and-mortar retail forms have struggled. Now in Detroit, a local accelerator (TechTown Detroit) and a community development group (Midtown Detroit Inc.) have launched a pop-up only retail environment aimed at helping mom-and-pop retailers find a broader audience while they figure out the ropes of physical retail.

The retail space, called Cass Collective, currently features six pop-up retail stores, according to an article on Model D Media. The retailers include an olive oil shop, a jewelry store and clothing boutiques, including a men’s apparel brand called Bleu Boutique featured in the article. Before getting a retail presence at Cass Collective, Bleu Boutique had been largely e-tail only outside of pop-up events and fashion shows. The vision for the space is to rotate out each retailer every three months to a year.

The appeal of a “pop-up mall” with a frequently-refreshing lineup of stores seems not unlike a farmer’s market, without any seasonal limitations and with a potentially more varied retailer mix.

Beyond giving startups a semi-permanent foot in the door of brick-and-mortar retail, the advent of multi-retailer pop-up spaces could keep the pop-up model functioning. Some have expressed concerns that mall landlords, for instance, will stop playing ball with pop-ups in favor of longer-term leases.

Outfits like Cass Collective could also keep things affordable in an area that may become as price-prohibitive for entrants as traditional brick-and-mortar. As pop-ups have grown more popular, pop-up rent has increased. For example, the 2015 rent for pop-up locations in the High Street fashion district in the U.K. was as expensive as traditional brick-and-mortar rents.

While Cass Collective appeals strictly to local mom-and-pops, the retail model has grown popular across the board. Amazon.com, for instance, began opening up pop-ups in malls nationwide last year to let customers try and buy their connected devices like the Echo. Even luxury brands like Nordstrom have been launching pop-ups at big-name cultural events like South By Southwest and Coachella Music Festival.

DISCUSSION QUESTIONS: Do you think pop-up only malls like Cass Collective will be able to draw enough traffic to remain sustainable in the long term? Will Cass Collective allow small retailers to figure out brick-and-mortar and omnichannel as intended?

Please practice The RetailWire Golden Rule when submitting your comments.
Braintrust
"This format has tremendous potential if the developers design and implement the correct infrastructure rather than just providing square footage."

"I hope the accelerator sponsors keep rents in check for mom-and-pops in order to let innovation flourish."

"This also creates the “what’s new at the mall” sentiment for shoppers if they are aware that stores change constantly."

18 Comments on "Will pop-up only malls catch on?"

The long-term sustainability of pop-up malls will depend on attracting and curating the correct collection of shops. I remember an old SNL sketch for the Scotch tape store. The products and services need to be multi-dimensional diverse and cater to the surprise and delight aspect of shopping. The merchandising design, technical infrastructure and processes should also allow seamless deployment and sales of consigned inventory. This will allow quick turnover to other products and brands. This format has tremendous potential if the developers design and implement the correct infrastructure rather than just providing square footage.

I feel that this is an excellent concept with great potential. One key benefit of pop-ups has always been the short-term lease, allowing a company to test something before making a long-term commitment. Often the deals are attractive and that helps start-ups or new ventures get a chance to see if they have something that will be successful or not. For the mall, pop-ups fill an otherwise vacant space. Pop-ups can make shopping malls more appealing when the pop-ups are pushcart businesses attracting customers as they walk through the mall. So will it be successful? The answer is yes, provided there is good marketing and participants are screened carefully to make sure their concept is sound and fits in, whether it is Cass Collective or another space doing something similar. The biggest benefit is to the consumer. One of the most significant advantages of brick-and-mortar is being able to browse. Shoppers love seeing and experiencing new concepts, stores, merchandise and buying opportunities. Many of these pop-ups may find a great future with traditional brick-and-mortar locations… Read more »
3
|
0
-   Share

The rejuvenation of Detroit will herald many approaches to the living city and urban commerce as downtown Detroit initiatives re-imagine downtown living with housing, workplaces, entertainment and shopping. The pop-up focus of a shopping destination merges some pages from the playbooks of mall operators, economic development, tourism, farmers’ market and community development. It is an experience we all love for the discovery, sensory feast and gift buying opportunities that it offers.

I have to agree with the economic development and mixed-used aspect of why pop-ups will be the new norm. For several years, urban renewal strategies across US cities have included transforming deteriorating Main Streets to modular retailing to accommodate pop-up shops for entry-level retailers to get their feet wet. In addition, the emergence of “mixed-use” buildings with shopping/living may have to accommodate a majority of pop-ups to keep the retail spaces filled.

Shoppers love the excitement and variety provided by pop-up retail. Giving local retail “newbies” a place to test their product mix and merchandising skills is a great opportunity as well. I hope the accelerator sponsors keep rents in check for mom-and-pops in order to let innovation flourish. Detroit has a great spirit these days to help young entrepreneurs win. I’m proud to say it’s my hometown!

I’d like to flip the question around: Will non-traditional pop-up stores help save malls? There is a benefit here for mom-and-pop stores to learn retail while providing malls with infusions of fresh ideas. Pop-up only malls could catch on if they offer a wide selection of retailers and those retailers provide a level of service that consumers expect.

The iconic Middle Eastern bazaar makes a comeback in an indoor urban or suburban environment. What’s not to like? This may not be able to sustain a mall on its own. But couple it with a good entertainment and a food destination offering and you have a winner!

As the retail paradigm shifts to an experienced-focused model, retail pop-ups have become a natural evolution of the shopping journey. For the smaller to mid-sized designers, pure-play e-commerce, and mid-sized retailers it offers a significant value proposition as it allows you a way to creatively and innovatively interact with your customers with limited-time exclusive experienced-based journeys, all without the limitations and risks associated with long-term store leases.

Retail pop-ups have worked phenomenally well in highly-cosmopolitan cities such as NYC, London, Boston, Paris, etc. Companies such as Cass Collective should focus on what is making retail pop-ups such a phenomenon in the larger cities. This aligns very well with the ongoing evolution of retail and also offers an opportunity for smaller markets to revitalize their shopping malls.

This is a great idea. Pop-up shops which use social media to spread the word and generate excitement about their launch will be immensely successful. As will pop-ups which market an experience that customers can’t find once the store moves on, such as the nostalgic Saved by the Bell pop-up in Chicago.

There are two issues that have driven pop-up stores. The first is the availability of space and therefore below-market rent. The second is matching seasonality with business. The first is very opportunistic. The second will continue to make sense, but is there enough of a swing in seasonalities to fill a mall?

To me the problem is the mall itself. Why go at all? Is there a draw? I am hard-pressed to imagine this concept attracting people to drive even 20 or 30 minutes to make a visit, unless there is more to attract them. However, as in the Detroit example, it may fit very nicely in an urban environment.

Buzz moves people and product. In an increasingly less loyal environment, this is an interesting concept. But probably not financially sound without a larger footprint. The big issues are communications (marketing), costs versus return and whether buzz and traffic can be sustained.

The addition of pop-ups to any mall has the potential to create a surprise effect that can keep people coming back. This means that careful selection and mix is very important and that means lots of work for the malls in order to keep it turning and fresh. In order for the malls to attract lots of pop-ups they will also need to provide services. The look and feel of retail is indeed changing and this is just another piece of the landscape.

This is a great way for brands to reach their target customers in a very local-centric way. Plus it gives mall owners a way to leverage unused space. The idea of frequently changing store concepts in a mall space should be a great way to attract consistent foot traffic — pleasing retailers and allowing online-only brand to establish a physical connection with customers. As customers want a more experiential shopping visit, this could be something to watch closely in the future.

This is a fantastic opportunity for startups, established retailers, CPG brands and even non-traditional mall occupants like automobile dealers, DIY outlets, etc. This also creates the “what’s new at the mall” sentiment for shoppers if they are aware that stores change constantly. Great stuff!

To show long-term sustainability, pop-up only malls will require developing a strategically correct approach to attracting both relevant small retailers and their customers. This can be achieved through both offline and online engagement. For example, a mobile application or a website announcing some of the major upcoming pop-ups will contribute to a brand awareness and provide more tools for startups and small retailers to promote their businesses. Affordable leases, excitement, interactivity and unique shopping experiences are the key factors for this model to work.

Seasonal pop-up stands have been around for years, mostly for Christmas. With all the store closings, pop-up stands could fill some of the space. The issue is, most are seasonal and are linked with wide swings of seasonal sales. On the plus side, constantly changing stands could create the treasure hunt effect. The down side is, unless they have an online presence, consumers are unlikely to shop. Where do you go with defective products for repair or return? Most pop-up stands employ aggressive sales associates, so many have a bad image. But as a field test for even established retailers, there may be some real value toward further understanding the customer.

Pop-up only malls provide a great opportunity to provide fresh, hyper-local assortments that fuse the best characteristics of traditional outlets with innovative formats that engage shoppers. The success of this format will be determined by the traditional rules of retail including location, assortment, and experience. Location is paramount and these popup malls must collocate with population centers capitalizing natural pedestrian flows including food and entertainment areas, town or retail centers, and event zones.

Yet location alone is not enough to drive the success of this format; operators must ensure that the assortment and experience is fresh and fun. This requires the right mix of retailers and a rotational strategy to continuously introduce new offerings. Overall, I’m very positive about this format, but believe the success will be dictated by the operators creativity and ability to capitalize on the agility this format provides.

Braintrust
"This format has tremendous potential if the developers design and implement the correct infrastructure rather than just providing square footage."

"I hope the accelerator sponsors keep rents in check for mom-and-pops in order to let innovation flourish."

"This also creates the “what’s new at the mall” sentiment for shoppers if they are aware that stores change constantly."