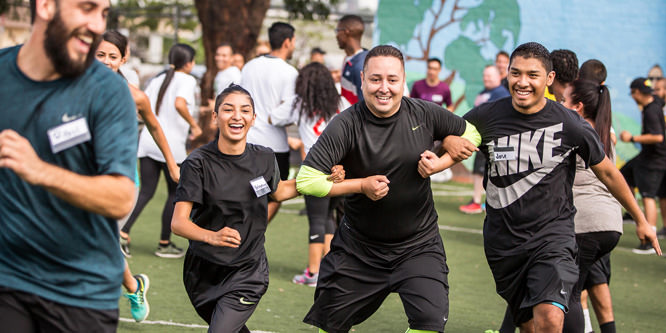 While some stores support communities by working with local suppliers or sponsoring the local Little League team, Nike in some stores does it by committing to local hires, on-ground community activation, and grants.

“Typically we’ll be one of the earliest movers in an area where retail is accelerating; we are part of that,” Christiana Shi, president of Nike global direct-to-consumer, told Forbes just before the opening of its first Community Store in downtown Detroit.

The stores have four goals. The first is the aim to hire at least 80 percent of its sales force from within a five-mile radius of the location. An East Los Angeles location has virtually 100 percent hires in that range.

The second is to capture “the spirit of the city with the store’s curated local design and product offerings.” In its Detroit store, opened in the former F.W. Woolworth Co. building, the walls feature photography of local sport courts and landmarks, including the Decquindre Cut Greenway and “Detroit Never Stops” artwork by local typographer Neil Tasker. Product plays up Detroit-themes and local sports teams.

Third, associates known as “store athletes” are doubly tasked to volunteer locally. In addition to the hours dedicated to community by all stores as part of the Nike Community Ambassador Program, Community Store associates are allocated additional volunteer hours to support local groups. Detroit associates have been supporting the local Boys & Girls Club’s sport, recreation and fitness programming.

Finally, the Detroit location is the first to offer $40,000 in annual grants of $5,000 each to eight local non-profit groups via an expanded Nike Community Impact Fund.

Community Stores are also open in Portland, OR; South Chicago; the Mid-City neighborhood in New Orleans; the Ivy City neighborhood of Washington D.C.; the Flatbush section of Brooklyn; and East Los Angeles. In total, Community Store teams across the U.S. will award $290,000 each year in their communities in partnership with CAF America and the Oregon Community Foundation.

DISCUSSION QUESTIONS: What aspects of Nike’s Community Stores most impress you? Which ones can most other stores incorporate into their urban locations or elsewhere?

Please practice The RetailWire Golden Rule when submitting your comments.
Braintrust
"One of the most powerful relationship builders a company can do is have a community engagement strategy."

FWIW, this isn’t a new strategy. It was what lululemon used to do. I was really struck by it when I first walked into one of their stores, how they promoted yoga instructors, sponsored community yoga events in the public space, etc. They used to have information racks in the stores (like how posters may be displayed in a museum gift shop) which would list community relevant information, including of course, yoga instruction opportunities, etc. I don’t think they do it anymore, at least the store that is closest to me no longer has those racks. I don’t know if this is the case for other stores (I remember a few years ago seeing a similar rack in their store on Union Square in Manhattan). It’s what independent bike shops mostly do, too. And Adidas Runbase in Tokyo (there are other versions of this store by other companies located elsewhere in that city, e.g., Joglis and Nohara by Mizuno). The missed point is, it isn’t a strategy that had been done in “underprivileged areas” but… Read more »
1
|
0
-   Share

One of the most powerful relationship builders a company can do is have a community engagement strategy. This is why “local” does so well. How can the big international companies participate? Engage and connect with the community. Nike knows exactly what it’s doing, and they are doing it well.

Braintrust
"One of the most powerful relationship builders a company can do is have a community engagement strategy."