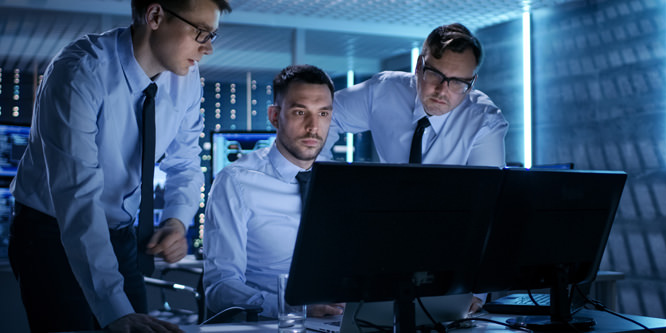 We’ve all read of numerous instances of retail fraud, and many of us as consumers have been victims of it. While consumers generally aren’t responsible for the charges, the pervasiveness of it undermines retailer, bank, credit card and e-commerce credibility. With the rise of EMV chips in use at physical stores, fraudsters are shifting some of their focus online.

At last month’s Shop.org, RetailWire sat down with Michael Reitblat, the co-founder & CEO of Forter, a developer of a fraud prevention system, to get his take on what can be done. First, he said, while retailers are normally responsible for fraudulent online transactions, historically they made individual efforts to try and stop it, rather than pooling their resources.

While there is approximately $4 billion in actual online fraud per year, it becomes a $20 billion issue when you consider lost sales, according to Mr. Reitblat. To help retailers manage the problem, Forter has built a system that reviews transactions in real time, and provides a “yes or no” answer to retailers in less than one second. Further, if Forter is wrong, they accept responsibility. Mr. Reitblat says the service analyzes thousands of data elements per transaction to get it right.

He noted that while online fraud is rapidly increasing, Forter relies on dynamic behavior to stop it, versus static information, which is what retailers have traditionally used. The service, in other words, uses algorithms and data analytics to evaluate behavior, people and trends, rather than history. A Forrester study said the ROI on using Forter’s system is 153 percent.

There are numerous companies offering services similar to Forter, including ClearSale, which offers a single solution for web, mobile and telesales. Its system is based on machine learning, rules-based reviews as well as manual reviews and customization to the client’s needs.

With ClearSale, transactions that are suspect often get a manual review prior to a decision being made. This obviously takes longer than basing it all on instant comparison of thousands of data points by computer. Suspect transactions appear as “pending” to the merchant for up to a few hours until a decision is made.

DISCUSSION QUESTIONS: As fraudsters have turned increasingly to online transactions, how critical is it that retailers employ a multi-layered solution to prevent fraud? What’s the best way to find the right provider?

Please practice The RetailWire Golden Rule when submitting your comments.
Braintrust
"In the end, preventing fraud requires retailers to know as much about potential system vulnerabilities as the bad guys do."

"The growing problem with fraud is mostly because U.S. banks are so backward."

"Yes there is a need. Finding the system that is fast and accurate, even for consumers who travel a lot, is a challenge."

7 Comments on "Online fraud is a $4 billion retail problem"

The fastest way to lose revenue is to have enough customers get hacked. It will take a multilayered approach using AI plus machine learning plus predictive capabilities coupled with a large-velocity, high-capacity data solution to stay one step BEHIND hackers. But hacking is no longer breaking down the front door. It is much quieter and lethal now so finding subtle anomalies in the data is the key. Cybersecurity tools alone can’t match the resources being thrown into breaking in. We need all the tools we can get. Look for providers that have gone through breach remediation … we always learn from what has been done to help prevent breaches in the future.

The growing problem with fraud is mostly because U.S. banks are so backward.

Even in stores, security is pitiful — yes, my card has a chip, but I can still put any old scribble on the signature pad, no one checks it and the transaction always goes through.

Companies like Apple and PayPal are doing most to up security, with biometric verification and so forth. But the banks, they remain backward and stuck in their traditional ways.

Extremely critical. It is easier to game a system than it is actual people. The last question is a bit trickier. I’d say — at a minimum — you really want to explore references. But, in the end, preventing fraud requires retailers to know as much about potential system vulnerabilities as the bad guys do and that means augmenting your loss prevention efforts by hiring the best coders you can find and maybe even a “white hat” hacker or two. And remember, in the digital age there really are only two kinds of systems: those that you know have been breached; and those that have been breached, but where the breach has not yet been discovered.

Retailers will be interested in using a system that helps prevent fraud. Finding a good system that is fast and accurate is more of a challenge. A “pending” charge for hours is problematic. Consumers will not hang around that long to wait for approval. The embarrassment to consumers who are denied because they are traveling and in a new location or where there has been a mistake might make consumers reluctant to go back to that retailer. Yes there is a need. Finding the system that is fast and accurate, even for consumers who travel a lot, is a challenge.

A multi-layered approach is extremely critical to have any chance of reducing fraud. We repeatedly see the hype around point solutions year after year (and EMV is one of those — see an article I wrote a while back about why PCI and EMV is not enough) and each one of these solutions has a special interest backer. Let’s face it, EMV was pushed by the banks primarily for their benefit, not retailers nor consumers. Just because I put a chip card in the reader at the store does nothing but ensure the card is a real one. And forget about that signature validating anything of value! At the end of the day, it’s a cost benefit trade-off and risk management problem. A retailer could spend any amount of money they want on security and unless they are buying NSA-level security, it probably won’t come close to stopping 100% of attempted fraud. So retailers need to consider what their acceptable minimum will be, and then ensure they have a corresponding risk management plan to address… Read more »
1
|
0
-   Share

This article could stand a lot more clarity, including the very basic issue of defining what was meant by “online fraud.” Eventually it seemed to imply credit card fraud, but I would have thought the issue was, or should be, more broadly defined. And perhaps that’s why the number cited ($4B) seems so remarkably, even ridiculously, small. To be honest, if that’s really the extent of the problem, or even if it’s the larger $20B figure, I think you’re going to have a hard time interesting people in “solutions” … it seems more like a rounding error.

This is yet another great example of employing AI/Machine Learning/Cognitive Computing in retail. I think this is a great way to address the growing online fraud problem. The key is to make it fast and relatively seamless for the shopper, which is being done well with some newer technologies.

Braintrust
"In the end, preventing fraud requires retailers to know as much about potential system vulnerabilities as the bad guys do."

"The growing problem with fraud is mostly because U.S. banks are so backward."

"Yes there is a need. Finding the system that is fast and accurate, even for consumers who travel a lot, is a challenge."