Penney gets fashionable with its Jacques Penné pop-up 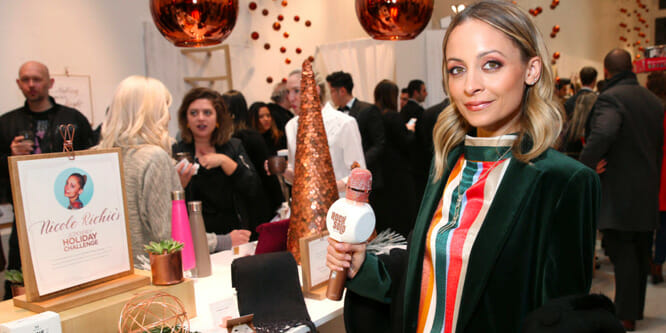 Looking to raise its fashion cachet with younger consumers and poke a little fun at itself, J.C. Penney this past Friday and Saturday opened a Jacques Penné pop-up in the trendy neighborhood of SoHo in Manhattan to showcase gift ideas in part curated by television personality Nicole Richie.

“JCPenney has long been referred to as Jacques Penné, a playful reference to its elevated merchandise at affordable prices, and the retailer is bringing this to life,” J.C. Penney said on Facebook.

The pop-up opening coincided with the launch of an online virtual reality feature that gives consumers a 360-degree view of the Jacques Penné collection to make purchases on their desktop and mobile through Jan. 7.

Wrote Bethany Biron for Glossy, “To the unassuming eye, it could pass as an Etsy shop come to life, rather an event put together by a beleaguered mall brand like JCPenney — which is exactly what it’s going for.

The pop-up builds on the launch in early November of the “JCPenney Holiday Challenge,” a campaign that encourages consumers to discover how much they can save by shopping at Penney’s. The department store operator has admitted to its challenges trying to be cool enough to attract Millennial shoppers.

Besides visits by Ms. Richie and Mr. Strahan, the pop-up featured meet-and-greets by Disney channel actress Lara Marano, fashion blogger Danielle Bernstein and YouTube stars Brooklyn and Bailey. Penney wrote, “Hosting meet-ups with these key influencers offers an opportunity to introduce their fans to our brand and convert them into loyal JCPenney shoppers.”

All the stars also have a vast social reach. Ms. Richie alone garners four million followers on Instagram and five million on Twitter.

DISCUSSION QUESTIONS: Are pop-ups, celebrity collaborations, influencer meet-and-greets and only virtual reality shops the formula for J.C. Penney to gain traction with younger consumers? Which part of the Jacques Penné initiative will likely be most beneficial?

Please practice The RetailWire Golden Rule when submitting your comments.
Braintrust
"If there is a time for J.C. Penney to experiment with pop-ups and other innovative in-store concepts, it’s now. "

"The pop-up will generate buzz, but it’s hard to see how it will translate into sales in traditional J.C. Penney stores, which are a visual riot."

"It can come across as a classic brand re-discovered by a younger generation or as a last-ditch effort by a dying brand."

This is a sensible move for J.C. Penney, which is currently struggling to gain traction in fashion. The activity helps to move the dial somewhat and gets the chain noticed on social media.

That said, this is but a drop in the ocean in terms of the things J.C. Penney needs to do to grow its market share among younger fashion consumers. At the end of the day, this offering is not reflective of the down-at-heel in most J.C. Penney stores.

The pop-up will generate buzz, but it’s hard to see how it will translate into sales in traditional J.C. Penney stores, which are a visual riot. Experiments like this can be helpful, but a radical re-thinking of the store experience is necessary in the age of the customer.

I couldn’t agree more, Cathy. When I read this article I thought, “Of course they should be leveraging influencers to get people in stores.” And they probably should have been doing this five years ago.

Aside from that, such moves must be considered a smart part of the “radical re-thinking” you mentioned. If this alone is the radical re-thinking, I’m afraid J.C. Penney isn’t as radical as it needs to be to survive.

One major challenge with reaching young audiences is how fragmented the distribution channels to reach them are. J.C. Penney is doing the right thing by not relying on just one marketing tactic, but a variety in order to gain traction. My money is on the influencer meet-and-greets (and noise created around those) being the most effective.

While pop-up retail is a $50 billion business in North America, it still gets little attention within retail overall — but this will increase given the growing importance of customer experience. This recorded webinar by the Centre for Digital Experience provides excellent examples of brand building using pop-ups.

Vibrant retail provides a memorable experience and there pop-up as well as store-within-a-store are highly focused ways to accelerate brand buzz.

If there is a time for J.C. Penney to experiment with pop-ups and other innovative in-store concepts, it’s now. This will resonate very well in the cosmopolitan and more urban areas. As the J.C. Penney brand looks to regain its mojo and relevancy, the recommended approach is to crawl, walk, run when it comes to in-store experimentation.

Any positive publicity is good publicity for J.C, Penney. Combine that with a social media-targeted campaign and, along with strategic urban stores, the pop-ups may just generate some interest and potentially some new fans.

The initiatives are an example of what retailers are trying in order to generate excitement, especially those that have been experiencing sales woes. Fortunately for J.C. Penney, it can afford to try a few different things and see what sticks and where. (Not all neighborhoods are created equal.) Jacques Penné sounds kicky and catchy, and may play well with the intended audience. Good luck to Jacques. Let’s wait and see.

Fun, Jacques Penné. Good hype. At issue is how to scale the adventure and fun of Jacques Penné past the influencers’ Instagram and Twitter accounts into full-price sales across J.C. Penney’s 875 stores, which happen to be devoid of sales associates and relevant Millennial merchandise.

This move by J.C. Penney will not be fast enough to turn around this brand in a declining retail channel. J.C. Penney needs a complete strategy change instead of just a holiday campaign challenge. The social reach from influencer marketing will bring the most benefit to J.C. Penney. However, this will require time to build J.C. Penney’s reach within the social platform.

For J.C. Penney to be successful, they need to decide who they want to be. I think that this is a great idea if they are launching a new take on the brand which is much more about affordable, fun, fashion. However, when you go to the website it is the classic deal hunters’ dream of coupons and sales. I am not sure that these two models can combine in their current form to be a coherent brand for the customer, not to mention the fact that those are two pretty different customer groups. I would recommend repositioning their store and online experience toward Jacques Penné and take the coupons and sales stealth and personalized to make these work together.

It’s a good effort due to the strategy but execution will be critical. It can come across as a classic brand re-discovered by a younger generation or as a last-ditch effort by a dying brand.

This new model should replace the old one — old J.C. Penney stores should be closed down. Offering these special experiences rather than a hodge-podge of not great products at not great prices will give J.C. Penney an edge and definitely reach a younger crowd.

Jacques Penné … that’s’ good. Penney’s is in on the joke. I see this pop-up as a fun way to get younger shoppers interested in a brand that most see as the place where their mom shops.

Braintrust
"If there is a time for J.C. Penney to experiment with pop-ups and other innovative in-store concepts, it’s now. "

"The pop-up will generate buzz, but it’s hard to see how it will translate into sales in traditional J.C. Penney stores, which are a visual riot."

"It can come across as a classic brand re-discovered by a younger generation or as a last-ditch effort by a dying brand."