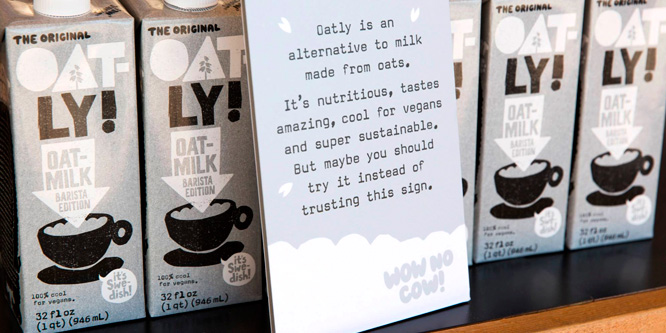 As the novel coronavirus pandemic got underway last March, customers suddenly found themselves buying more from the center store. This shift back to frozen and packaged foods did not preclude customers from looking for specialty items, however, as the plant-based food space grew significantly during 2020, according to a new report.

Sales of plant-based foods in the U.S. jumped 27 percent to $7 billion during 2020, according to the Plant Based Foods Association (PBFA) and the Good Food Institute (GFI), reports Supermarket News. The products outpaced the growth of other food categories as overall U.S. retail food sales climbed 15 percent during the same time span. The biggest increase in sales by dollars was in plant-based milk (20 percent growth, $2.5 billion) and the biggest increase in sales by percentage was in plant-based meats (45 percent growth, $1.4 billion).

Throughout the pandemic, consumer packaged goods have experienced an increase in sales attributed to such habit-shifting realities as lockdowns/stay-at-home orders and the closure of restaurants, along with an unprecedentedly high rate of adoption of e-commerce ordering. In the few months before the 2020 holidays alone, CPG sales were up 10 percent year-over-year.

Early on in the pandemic, customers also often found themselves trying out new CPG products at a higher rate due to either home delivery and curbside slip-ups or out-of-stocks/substitutions.

Even before the pandemic, the plant-based meat market had gotten significant enough to draw the attention of one of the nation’s biggest grocers. In January 2020, Kroger launched its own private label plant-based meat alternative brand to compete with emerging leaders like Beyond Meat and Impossible Burger.

Such products have gotten closer to the mainstream in other parts of retail, as well. Starbucks began serving lattes made with oat milk, almond milk and coconut milk in select locations through the U.S. and Canada, according to Insider. The chain, CNN reports, began experiencing out-of-stocks on oat milk after adding it to its menu nationally in March.

McDonald’s inked a three-year deal with Beyond Meat to develop a new plant-based menu under the McPlant banner earlier this year, according to VegNews.

Please practice The RetailWire Golden Rule when submitting your comments.
Braintrust
"The momentum started before the pandemic but I suspect the pandemic helped boost trial in some areas. "

"This is one trend that the pandemic had very little to do with. In fact, the continued increase in purchases of plant-based products theoretically should have fallen..."

"It’s clear that the dairy industry has been disrupted, and we should expect these trends to continue well beyond the pandemic."

The plant-based CPG movement was well underway before the pandemic. However as many things experienced an acceleration during the pandemic, plant-based and more holistic products have become extremely popular. Especially with the increased awareness and focus on our health, wellness, and overall lifestyle balance.

The Oatly story is an intriguing one. Their growth trajectory from only being a novelty item in Brooklyn and Manhattan cafes to being a featured item in Whole Foods and other organic grocers. With their partnership with Starbucks, they are riding the wave of momentum. It’s clear that the dairy industry has been disrupted, and we should expect these trends to continue well beyond the pandemic.

The momentum started before the pandemic but I suspect the pandemic helped boost trial in some areas. It was an odd mix of comfort and shelf-stable foods people were looking for, but we also heard a desire for more health and wellness focus, which plant-based helps with.

Yes, we definitely see plant-based CPG products continuing to grow. People are more health conscious than ever and realize replacing meat with plant-based products, even at one meal can significantly help your health.

The new challenge plant-based will face is that not all of those items are really healthy. Consumers will need help discerning between truly better-for-you and sort of better-for-you and we’ll begin to understand the longer-term impact of the highly-processed meat alternatives.

Consumer interest in plant-based foods and beverages is continuing to grow, and it is interesting that you see retailers from Whole Foods to Aldi carrying these products. One of the biggest hurdles to even faster growth has been price. A big silver lining for plant-based meat alternatives during the pandemic was the temporary closure of meat processing plants, which caused product shortages and spikes in protein retail prices. This effectively temporarily closed the price gap between plant-based meat alternatives and traditional proteins, which, along with retail availability, helped encourage purchase and trial of plant-based products. Long term, price parity (along with taste and better nutritional profiles) will be an important factor to help sustain long-term adoption and sales growth of plant-based alternative foods and beverages. Ample capital is also being invested in plant-based companies, which should help accelerate innovation, improve taste/nutritional profiles and help bring best practices that can support further growth across the industry. More products creates healthy competition, which should help prices come down and lead to higher volumes sold, underscoring that this… Read more »
1
|
0
-   Share

Even before the pandemic, more consumers considered themselves “flexitarians,” open to both meat and plant-based meals. Some consumers choose plant-based foods to minimize the impact of their consumption habits on sustainability. Meanwhile, consumer loyalty has waned in recent years as consumers have been willing to try innovative goods across grocery categories.

The momentum behind these longer-term trends suggest plant-based CPG products will remain popular beyond the pandemic.

This is one trend that the pandemic had very little to do with. In fact, the continued increase in purchases of plant-based products theoretically should have fallen, not gone up. I don’t think people got excited about being locked in, but trying new types of food.

There is a very long list of reasons why consumers are turning to plant-based alternatives, and one big one is the push towards sustainability and another is personal long-term health.

Now, I’m a bit prejudiced, as I haven’t eaten meat in longer than most of you have been alive, but the other difference is that the new plant based products simply taste better. Compare Beyond Burger with a Boca Burger (for example) and you’ll see what I mean.

This is a huge segment. For some reason, the “Street” hasn’t really become a believer yet, but I’m personally glad to have more options available to me as a consumer. We’ve come a long way.

The trend is nothing new. Plant-based products were on a growth trajectory even before the pandemic. As with so many products the pandemic, for many reasons, accelerated trial. Look what it did for people who never went online.

If a company has a good product, trial is a key. Net/net growth will continue. Though I imagine it will slow down from the pre-pandemic trend, as consumers who are looking for alternatives find many of these products are not delivering the satisfaction they had hoped for in a substitute.

I can’t say I have a strong sense of why plant-based products soared during the pandemic. For sure they were (typically) available alternatives when meat-based products were unavailable, and yes I suspect a small bump came from a few people choosing plant-based products for health reasons. But I’m not convinced those two factors account for a 27 percent bump. I can share a personal anecdote, though, that may shed some light on the bigger picture. I tried alternative-meat burgers for the first time during the pandemic because I received a package as part of an erroneous grocery delivery. I have long known they aren’t necessarily healthier and I know they have their own list of environmental concerns (albeit far fewer than beef), but I was reluctant to waste anything during the pandemic. So I tried a burger. And after 27 years as a practicing pescatarian who ate black bean patties on burger night, I had a hard time not loving that darn burger. The taste, the texture, the aroma all brought me back to the… Read more »
0
|
0
-   Share

Bruno, I have a great recipe for beyond meatballs I can send you. They are crazy good!

As a general rule I am wary of news of dizzying sales hikes from vested interest trade associations. A cynic, for example, might point out the percentage growth in plant-based meats might be a result of starting from a low base. That said, the market for plant-based products was solid before the pandemic. Sure, oat milk is grabbing headlines now, but soy milk has been an established plant-based milk alternative at Starbucks and other restaurants and coffee shops for years. One could argue, in fact, that it was the foodservice industry that gave these products their initial boost. No question that Burger King’s Impossible Burger ad campaign brought plant-based meats to center stage. I’m not sure I see a direct tie between pandemic shopping behaviors and plant-based products, so I think that it’s more productive to focus on why consumers are buying these products. Is it novelty, personal health concerns, taste, environmental concerns, etc.? If we isolate the “why” behind plant-based sales, we’ll be in a much better position to speculate on the category’s future.

I don’t believe that the pandemic influenced plant-based purchases to any significant extent. Heart disease is the number one cause of death in the country. Promoters of plant-based food and most knowledgeable nutritionists have been telling consumers that full-fat dairy (cheese and whole milk) and red meat will clog arteries with saturated fat and lead to heart disease. Consumers are listening and enough of them are believing it. This will continue. Savvy grocers are creating plant-based food sections in various departments of the store. Will the movement mean the end of a juicy steak and a bowl of chunky-monkey ice cream? No, but the plant-based movement will have an impact on sales for sure.

I would say there are four causals that contributed to the rise of plant-based food. Firstly, even before the pandemic, there has been a 600% rise in vegetarianism in the US. Secondly, the pandemic allowed people more time to follow a healthier lifestyle (we could see more people taking daily walks outside than ever) and eliminate less healthy food from their diet. Thirdly, the disruption in the meat supply chain during the pandemic led to more trials of meatless products; and finally, the scale allowed them to price their product more in line with the price per pound of real meat.

Braintrust
"The momentum started before the pandemic but I suspect the pandemic helped boost trial in some areas. "

"This is one trend that the pandemic had very little to do with. In fact, the continued increase in purchases of plant-based products theoretically should have fallen..."

"It’s clear that the dairy industry has been disrupted, and we should expect these trends to continue well beyond the pandemic."