Retail mash-up: What if Macy’s and Disney had a baby? 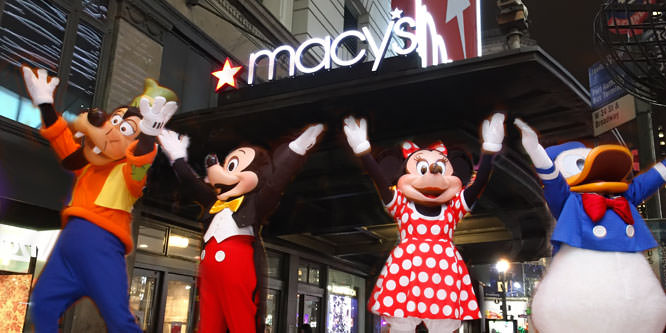 Retailers are facing an unprecedented number of challenges and trying to meet them in new and creative ways. But neither mobile apps, omnichannel initiatives nor even drone delivery may be creative enough.

Imagine, if you will, a new retail concept born of two existing brands — not a merger, but a product of the two, one which takes the best of each to form a new kind of retail entity.

In this case it’s a mash-up of a master of magical experiences and a dyed in the wool merchant capable of executing and delivering those experiences to the right audience.

What if Macy’s and Disney had a baby?

Macy’s problems are well known. Stores are too big and shoppers find the over-complicated layouts overwhelming. Shoppers say they are frustrated by Macy’s inattentive staff, and despite recent efforts, Macy’s omnichannel “seams” are still showing. And yet Macy’s strengths are less often outlined.

Macy’s has a deep well of merchants and relationships with suppliers. Its size and scale offer give the company leverage for favorable bargaining terms.

Disney, for its part, holds key real estate locations that give the chain long reach into middle America and middle class shoppers. Just turning over a portion of each store to the new concept would solve some problems for both brands. But Disney’s foray into retail has had its fits and starts.

The company began opening stores in 1987 but struggled to achieve profitability. The stores were sold to Children’s Place in 2004 and repurchased by Disney just four years later. Today there are some 340 stores globally and 700 shops within J.C. Penney stores. Flagship stores are located largely on tony, high traffic shopping avenues popular with tourists.

Not only is Disney a master of experience, it also excels at separating parents from their money in ways that leave little room for shopper remorse. The experience, most say, is worth every penny.

Would a Macy’s and Disney baby focus on licensed or store-brand merchandise or would Macy’s help extend Disney’s reach to other products that appeal to core shoppers? How might Macy’s learn from Disney’s more curated selection to breathe life into lagging categories like apparel, and expand logically into toys and games? How might Disney’s hospitality expertise, coupled with Macy’s merchant chops, create an entirely new kind of retail experience?

DISCUSSION QUESTIONS: What would the perfect Macy’s + Disney baby look like? What strong DNA would include from each operation? What “deficient genes” would you leave out?

Please practice The RetailWire Golden Rule when submitting your comments.
Braintrust
"If brick-and-mortar stores are going to be relevant in 10 years, they better learn something from entertainment companies."

16 Comments on "Retail mash-up: What if Macy’s and Disney had a baby?"

This one is tough to visualize or even comprehend. I would vote for Macy’s to have a baby with Apple or Google long before Disney. It might be interesting to see a department store full of exciting technology everywhere throughout the store truly enhancing the shopping experience and maximizing every omnichannel opportunity. But to me, the difference between the Macy’s and Disney customers is too great to find an exciting concept to make the “Disney Baby” a success. I know we’re stretching our imagination to find solutions to today’s challenged retailers, but I don’t see this as something that if it were to happen would be successful.

My first thought was, what would any business look like if Disney was in its DNA? One word answer: Better. Disney understands how to treat people and people pay more to be treated in Disney style. They understand what brings customers back. They understand how to create memories and stories and much more. Add Disney thinking to just about any company and they get better. So when a mass merchandise/department store meets Disney, a beautiful baby might be born. But it is still the parents that raise the baby. The success of this child will be dependent on which “parent” has more influence.

Disney knows all about delivering great experiences but maybe not so much about retail and Macy’s knows about retail but maybe not so much about experiences. Could they learn from each other? You bet. But we must not forget that the objectives of the two are very different. Disney captures and uses customer data to move people through their parks and to make the ebb and flow better in congested areas. They deliver experiences right where the people are. Experiences involve their magical kingdom and all its characters and this makes customers want to take a piece of it home. Macy’s, on the other hand, would have to determine their experiential objectives first. They aren’t trying to create a magical kingdom with memorable characters but perhaps a fun place to spend a Saturday and take home something for date night. I’ll have to put on my thinking cap a little longer for this one. But that’s my 2 cents.

If brick-and-mortar stores are going to be relevant in 10 years, they better learn something from entertainment companies. In 10 years there will be no other reason to go to a store.

I’ve often considered this as well, thinking about how Disney (or ex-Disney creative executive) could help drive immersive experiences and new management ideology at Toys “R” Us. The Disney experience is about escaping reality — fun with family and friends, being a kid again, meeting characters and of course rides and attractions. I think this aligns well for toys. However, I think the Macy’s experience should be focused on selling the aspirational yet attainable reality/lifestyle. What if they converted some of their selling space into living space? (e.g. “Residence by Macy’s”.)

Having worked at Disney and shopped at Macy’s I don’t see why the two would have dated, let alone have a baby. The corporate cultures are completely different, so are their guest experiences and how they approach consumers. Disney doesn’t need Macy’s, but Macy’s could sure use some Disney magic.

What a very intriguing hypothetical scenario! Honestly, if you integrate the customer-centric experience and entertainment DNA from Disney into Macy’s then one could only imagine how it would transform the shopping journey in what has become a stale brick-and-mortar format. Considering Disney’s track record of strategic acquisitions over the years, (Pixar, Marvel and Lucasfilm) and the fact that their main mission statement since their inception essentially has been to make people happy, then most certainly they should be the leading force in this scenario. While Macy’s would bring their mass merchandising skills, vendor relationships and other aspects to the table, Disney has a very proven customer obsessed-model, built around continuous innovation, quality, optimism, community, storytelling and curating experiences that are long lasting. Disney has experiences on the brick-and-mortar side and their merchandising strategies built around each new Pixar, Star Wars, Marvel has been outstanding and sustainable. Case in point, the Frozen merchandising phenomenon continued well after the movie was released. If within this “merger” Disney would have complete authority and influence around the curation of… Read more »
4
|
0
-   Share

Interesting sentence … “Honestly, if you integrate the customer-centric experience and entertainment DNA from Disney … ” Aren’t retailers supposed to be “customer-centric?”

Honestly Gene, by nature an obsession with the customer is supposed to be the mission for retailers. However over time legacy retailers have lost their focus on the customer experience side of things. An insights- and experience-driven company such as Disney cultivates an amazing following and loyalty by concentrating on the customer.

Disney’s DNA is all about the guest experience. That translates to creating all customer-facing interactions and processes with the customer in mind above all else. It’s about being zealously consistent, packaged in fresh and exciting offerings that transcend physical reality. It’s aspirational in the sense that this is where your dreams can come true.

So any babies from such a union would meld efficiencies in merchandising and back office processes with fanatic focus on delighting customers in the store. That would translate into delivering memorable experiences that are not motivated by commissions, ringing the fixed registers and scanning one more 20 percent off discount coupon.

I don’t see how the Macy’s/Disney baby would have a chance to succeed in this world unless it combines strengths to create something entirely new, different and desirable (of course). We know that alone there are many challenges for each of the retailers. And there’s information about how Disney’s business performs in J.C. Penney. Uniqlo includes merchandise from MOMA. So, there’s some further information available about how a store like Uniqlo can co-habitate with a “brand” that represents another perspective or experience.

Disney has a strong brand equity and undoubtedly consumers would have more tolerance and be forgiving if a Macy’s/Disney baby were unsuccessful. And I don’t see a large risk factor in terms of brand equity for either.

But for the life of me I can’t figure out the upside — unless there is a vision that goes beyond the products we associate with both retailers. If it’s another department in a store offering products that compete with other products in the store I don’t think it can work.

Honestly, stealing a page out of the “Experience Economy” playbook as a means of revitalizing Macy’s neglects the fact that Macy’s today — where self-service shoe departments are viewed as “innovative” — bears almost no relation to the Macy’s I used to frequent not all that long ago.

The missing elements here are identity and vision, not mouse ears.

An interesting proposition! It’s difficult to imagine what the result of such a union would be — Disney is such a different beast to Macy’s. It’s super-targeted and its experiences reflect that. Macy’s customer base is more diverse, but it’s not the only retailer that could learn from the Disney’s expertise in experience. Certainly a retailer that combined the expertise of both would be worth a visit!

What, exactly, is being proposed here? If it’s in a Disney shop in a Macy’s store, then the JCP presence makes the idea sound like a rehash of the Martha Stewart dustup.

If it’s a greater (presumably background) presence of Disney “curating” the Macy’s “experience,” then I think it’s a few decades too late. The 21st Century version of Macy’s has been all about ruthlessly stripping from the stores any trace of theatre — you know, those “flagship” things — that Disney might want to work with.

This concept may well be a stoke of genius, but I guess I’ll have to see it to believe it.

Interesting idea, but overly simplistic. Entertainment retail is a concept that started to fade twenty years ago. While Disney does amazing things, as mentioned in other comments below they are not successful (like most these days) in mall-based stores. What they do have is an incredible reputation for legendary service, a great culture, and a passion for the guest. That alone doesn’t cut in in regional malls that are looking at year after year of declining traffic, increasing vacancies, and a turned off customer.

To win those people back, Disney, Macy’s, and most everyone else needs to have all of that PLUS a compelling product, a value offering, and a unique store environment. Customers are smarter than ever, and they have more information at their fingertips. Too many retailers are underestimating that. Apple has the recipe probably better than most.

Braintrust
"If brick-and-mortar stores are going to be relevant in 10 years, they better learn something from entertainment companies."