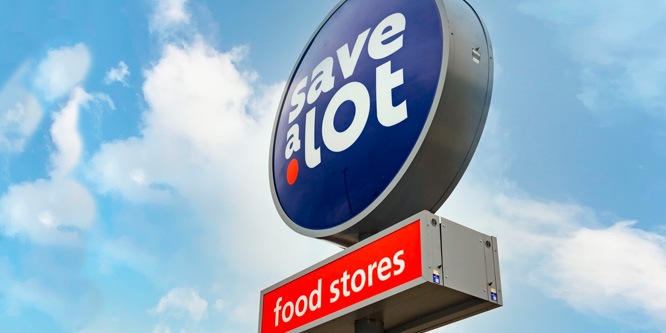 Save A Lot was one of the largest discount grocery chains in the U.S. and now it’s not after having sold off its remaining corporate stores to focus on its wholesale operations.

Save A Lot, which directly operated or licensed around 1,000 stores in 33 states prior to the pandemic, has been selling stores to various ownership groups around the country. Ascend Grocery acquired 33 locations in Florida and Yellow Banana has 38 across five states. Fresh Encounter, Inc. (51 stores), Janes Group (18 stores), Leevers Supermarkets (17 stores), and Save Philly Stores (14 stores) were other ownership groups that added to their respective portfolios.

In all, the company sold nearly 300 locations to various retail partners, which will continue to operate the stores under the Save A Lot banner. The only stores remaining under Save A Lot corporate are 18 locations in the company’s home market of St. Louis. These will serve as laboratory locations to test new programs that may benefit the company’s wholesale customers.

The company has been remodeling stores in recent years and expects to have all locations under the Save A Lot banner updated by 2024. A total of 200 stores were remodeled in 2021. The new look locations are said to be “lighter, brighter and easier-to-shop” than the former model that leaned heavily on a more Spartan aesthetic.

Save A Lot is touting its new role as a wholesaler in opening up opportunities for its retail partners to customize their businesses to meet the needs of the communities they serve.

In its press release to announce its transition to a wholesale model, Save A Lot said it “has built a sustainable, high-growth and community-focused business while remaining true to its mission of providing unmatched value to its customers. Recent store conversions have been met with enthusiasm by customers and media within the local communities they serve.”

Save A Lot announced earlier this month that its new CEO Leon Bergmann would officially join the company on Feb. 21. He replaces interim CEO Craig Herkert, who is assisting in the transition.

Mr. Bergmann is a grocery industry veteran with over 20 years experience. He most recently served as CEO of Harvest Sherwood Food Distributors. He has also held leadership roles at C&S Holdings, Unified Grocers and SuperValu, where he was president of the company’s West region from 2017 to 2018.

DISCUSSION QUESTIONS: What does it take to succeed as a wholesale grocer in the current marketplace? Will Save A Lot be able to succeed serving stores under its own banner or will it need to compete for those outside its current retail partner network?

Please practice The RetailWire Golden Rule when submitting your comments.
Braintrust
"A reboot for wholesaling will require better partnerships with individual store owners, and strategies to help drive volumes."

The company has been down a similar road before, when it focused on being the exclusive distributor to Save-A-Lot stores. And while this was great for corporate margins, it was less compelling for store operators, who pushed back on selection, quality and price. A reboot for wholesaling will require better partnerships with individual store owners, and strategies to help drive volumes. Save-A-Lot stores have long suffered from not achieving the virtuous cycle needed for a limited-assortment hard discount model to be successful – low retail prices drive volumes sold, which in turn helps lower purchasing prices, passing on savings to customers, which drives volumes even higher.

They will need better and stronger relationships from vendors and store partners to make this successful. I am hopeful they will be committed to this change as it is not for the faint of heart.

While there may be gold for Save-A-Lot at the end of this road, it’s a long, rocky path with many hardships and distractions. The real question is how committed the company is to making this transition, and how willing stakeholders are to wait for a return.

Operating a wholesale grocery business is not for the faint of heart at any time. This is even more true during the current pandemic. Two key factor that have gotten harder to overcome are the supply chain issues getting products into the warehouse and the driver shortages that hamper timely deliveries to retailers.

Save A Lot may have to seek business with locations outside its own retail network, but that is slippery slope if it wants to retain goodwill with its branded locations.

Braintrust
"A reboot for wholesaling will require better partnerships with individual store owners, and strategies to help drive volumes."