Should Banana Republic revisit its safari past? 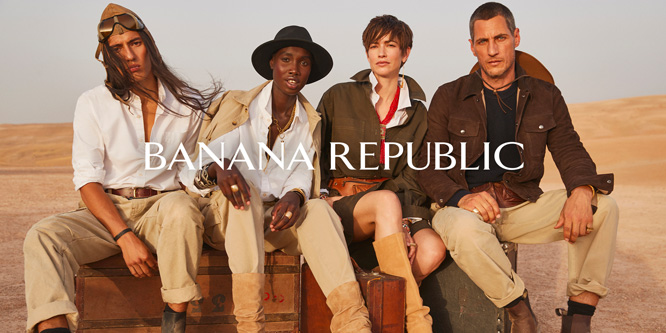 Banana Republic is launching a new brand identity and positioning — “winking at its heritage while reinventing itself for today’s modern world.”

The heritage being referenced dates back to the retailer’s founding in San Francisco in 1978 as a “weirdly wonderful safari brand,” as described in an Adweek profile from 2016. Initially known for its illustrated catalog reminiscent of J. Peterman, stores featuring elephant-tusk door handles, live tropical foliage, 17-foot fiberglass giraffes and army jeeps, Banana Republic rode a brief adventurous safari fashion trend that was elevated by movies such as Indiana Jones, Out of Africa and Romancing the Stone.

With preppy fashion taking over in the late eighties, Gap, which acquired Banana Republic in 1983, repositioned the chain as a mainstream, upscale retailer. Only beige khakis seemed to survive from the safari mix. The chain has underperformed for several years and is set to close 130 of its approximately 500 stores by early 2024.

In the brand’s refresh, the safari heritage can be found in its just-released “New Look” campaign that was filmed in Morocco and features leather and suede updates to the brand’s iconic BR photojournalist vest and cargo pants.

The brand will deliver its “Imagined Worlds” campaign on Sept. 28 “reflecting Banana Republic as it was originally conceived — a fictitious, faraway and unknown place to be explored.” Citing Shangri-La, Middle Earth, Westeros or Wakanda as metaphors, Banana Republic’s team considers the premise, “a springboard to redefine fashion, design, activism, sustainability and creativity.”

Banana Republic isn’t swapping the classic cashmeres, wool sweaters and chino pants it’s been selling for the last three decades for pith helmets. Beyond the “San Francisco Imagination” theme tied to its origins, the updated collection reflect two other influences: the “Mythical American Look” dating back to ’50s and ’60s designs and the “Late 1990s” metrosexual look.

“When you see someone in Gucci, you know it’s Gucci,” Ana Andjelic, Banana’s chief brand officer, told The Wall Street Journal. “I want you to be able to see someone and be, like, ‘that’s Banana Republic.’”

DISCUSSION QUESTIONS: Can Banana Republic’s original safari positioning help the chain recraft its identity 43 years later? What advice would you have for a Banana Republic refresh?

16 Comments on "Should Banana Republic revisit its safari past?"

Tell you what, if the product looks anything like the ads, I’d say definitely YES. Banana Republic got so far away from the original brand premise that I believe they lost their way. Not only does the new gear look great, it also resonates with the zeitgeist of comfort, home and longing for travel. I’m (back) on board!

Banana Republic was a favorite of ours – I still have some safari shirts that were the coolest (temperature wise) shirts I’ve ever worn in the summer. Then Gap killed it. The clothes were different, often functional, very well made and, while not hip in the least, fit well with fashion. I’m guessing they will skip the first three this go-round, and when does a pure nostalgia play ever really sustain itself? Advice – don’t do it, you’ll never capture the spirit of the original.

I don’t know if it will work for Banana Republic. But I do know a very similar approach is working for Territory Ahead. There’s always an appeal to adventure.

First off, kudos to Banana Republic for recognizing the need to change – especially in a world where remote work is more prevalent and putting formal and semi-formal work attire under pressure. However what I see here is a lot of words and garbled phrases such as “a springboard to redefine fashion, design, activism, sustainability and creativity.” This is typical Gap corporate speak – designed to sound clever but it doesn’t have much meaning. I hope that the translation into actual ranges and products that consumers can comprehend and enjoy is better than the description of the plans! Not least because reinventing Banana Republic will involve changing consumer perceptions in a very big way.

I was already working in retail when Banana Republic was all about safari and I barely remember it. It was a long time ago, although the tusks at the door and the Jeeps on the sales floor were kind of cool. But the most recent version of Banana Republic wasn’t. In these years the retailer offered a relatively expensive blend of bland apparel for men and women. Nothing to write home about, and nothing you couldn’t find in other mall stores.

Should Banana Republic go back to its safari heritage? Why not? The new styles are modified and updated versions of what one thinks of when you hear the words “safari fashions”. I have seen the slick ads and the new lines and I like what I see. But then again, I love a good pair of cargo pants.

Yes, it’s great to see a brand with a POV. So many of these brands turn into “blah” because they lose their original POV, get diluted, then stand for nothing and mean nothing and are designed for nothing. Banana Republic did some soul searching and discovery to figure out why they exist in the first place. Bring that to the modern era and to me, if done well, this can reinvigorate the brand. My advice would be to mean something to someone and not worry about turning others away — that’s called a stance and it can be a great thing. Digital marketing in the modern sense of how new brands are being discovered is important. Maybe some guerrilla-style marketing (pun intended) like Oatly in a way that’s right for them can bring in new, young audiences.

Well let’s talk about the driving, urgent need to make a transition to something new: workwear as we know it is dead, and before the pandemic Banana Republic was so much the epitome of knowledge worker drone workwear as to be a cliche. I guess kudos to them for recognizing the peril (although chewing through 150 of your 500 stores to come to that conclusion suggests they came upon it on the border of “too little, too late”). The big question is, will this move abandon/reject their current core shopper (a la J.C. Penney in the Ron Johnson era), or do they think that this move will bring them closer to that current core? It’s one thing to revamp your brand, it’s another thing to revamp your brand while also completely changing who you target with that brand.

I love the fact that Banana Republic is evolving, and evolving with a wink to their origins. Anybody else remember the original stores with the plastic palm trees and Jeeps parked in the middle? Banana Republic truly stood alone in those days. And their transformation to the dressier, upscale version was one of the more dramatic I’ve witnessed in mall retailing. Unfortunately, Banana Republic’s personality just evaporated over the years. And even if it wasn’t a return to its roots, this embrace of safari and adventure is a much needed pivot and shot in the arm. (And does anybody else remember that the original Aeropostale, under Macy’s, was an attempt to capture some of that travel/adventure zeitgeist?)

I liked the safari look that Banana Republic had back then – they were cool and no one was copying them, so it was unique as well. Unfortunately they never went on to the next relevant or hot thing – they became lost in the retail arena. I don’t know if going back to it is going to help, but they need to do something to bring it back to being on trend and relevant.

Nostalgia sells — but only for so long. So if the nod to the past is it, this won’t work. If, on the other hand, the nod becomes the foundation for defining “Adventure Wear for The Future” — apologies to Ben Ball — then they might be on to something. The old Banana Republic was never a style leader, but it always had a clear style that in many critical ways didn’t have to compete with other brands. It was what it was. So if they can invent a new style concept it might well turn their fading fortunes around. Not, by the way, a new business casual. More like clothes for a curiousity-based life lived creatively, on and offline. I would market it as clothes for those on the edge, or who want to pretend they are on the edge. Oh — and given the current PC culture I forget about the elephant tusk door handles.

I like the visioning – “I want you to be able to see someone and be, like, ‘that’s Banana Republic.’” but I think with the growth in the sustainability-minded generations, they should tie the safari theme to a good-for-nature message to resonate better with the Gen Zs.

I wonder if this about real play or play-acting? In that, isn’t BR still too large to be about a very specific “safari” look (and lifestyle)? Or is this just about a satellite collection that will lie within a broader, blander grouping of goods? Part of what drove consumers away from BR was their way of presenting options not easily found elsewhere, but then taking them away when it was found that selling only hundreds of units must yield to what sells in the thousands. Consequently, if this is about their taking a stance that’s inevitably misleading—as it had been about certain items for certain types of people that vanished in favor greater SKUs—then it wont lead them anywhere. Also, it seems very fraught to make it seem so “outdoorsy” in this age of environmental awareness, especially if your company is not equipped to make goods that skew with sustainability. (It’s as though they wanna be an AllBirds—which will have its own reckoning as it continues to scale up—while already being about manufacturing in mass… Read more »
1
|
0
-   Share

Banana Republic seems like the dog that finally captured what it was chasing, but then didn’t know what to do with it; a niche brand, was mainstreamed, placing it in the outer orbit of the Gapiverse, but also destroying any meaningful identity. So now that the GAP seems to only want two price points, can it reverse the time machine and find a new galaxy for it … really the one it started with? I doubt it, at least not at the sales volumes it probably wants. I fear that short of being spun off (to someone who’ll be satisfied with a lower profile) it seems destined to burn out.

Everyone loves a good story, and they especially love a good comeback. The Banana Republic team may capture lightning in a bottle to return to their roots and the spirit of adventure. For a company whose brand identity was once about the safari, along with the urban late ’90s look and preppy ’00s, now might be the perfect time to reimagining what the Banana Republic could be.

However, a new assortment strategy is not enough to resonate with a consumer base that is more interested in the brand’s promises, especially around sustainability, inclusivity, sourcing transparency, responsible workforce practices, and other political stances. What a brand means and promises in 2021 is far different than the narrative was in Banana Republic’s glory days. It will be interesting to see how this plays out.