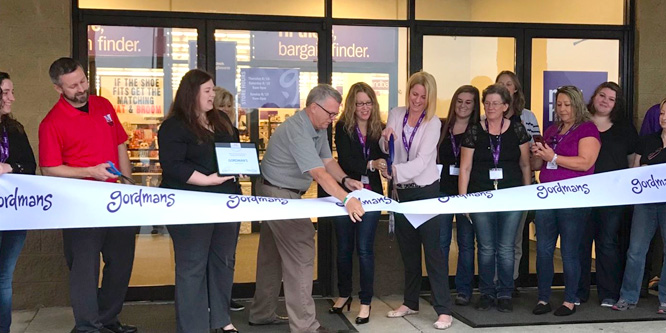 Stage Stores, which has traditionally operated a variety of department store banners in small towns and rural communities, recently announced plans to convert approximately 220 department stores to its new off-price concept, Gordmans, by the middle of 2020.

By the end of 2020, the nearly 300 expected Gordmans locations are projected to represent almost 50 percent of total sales volume. As of March 7, the company operated 709 Bealls, Goody’s, Palais Royal, Peebles and Stage specialty department stores, 87 Gordmans, as well as the stage.com e-commerce site.

“For the last few years, the off-price sector has seen tremendous growth despite the challenges that have faced traditional retailers,” said Michael Glazer, Stage’s president and CEO, in explaining the shift to analysts last week on a quarterly conference call.

Stage acquired Gordmans out of bankruptcy proceedings in April 2017. Last year, the chain was converted from what had been a bargain-driven department store model to a “true off-price concept,” said Mr. Glazer. Management eliminated promotions, reduced pricing to be on par with off-price retailers, and re-merchandised to create a “treasure hunt” shopping experience.

The nine department stores converted to the off-price format last year saw sales increases of more than 50 percent in the holiday quarter. Importantly, sales in its six smaller Midwest conversions were up more than 150 percent, and the majority of its more than 70 conversions in 2019 will occur in similar markets.

“The 2018 conversions have delivered fantastic results, illustrating the appetite in our smaller markets for off-price stores,” said Mr. Glazer.

Approximately 60 of its department stores are located in communities with populations below 50,000.

The off-price stores, when compared to its department stores, also benefit from a higher penetration of outperforming non-apparel categories, including home, toys and gifts.

The department store channel struggled over the holiday season and Bon-Ton Stores, a department store operator that targeted secondary markets, liquidated in 2018. Off-price continues to outperform with healthy fourth-quarter showings by TJX Cos., Ross Stores and Nordstrom Rack, but faces the possibility of oversaturation as existing and newer players such as Macy’s Backstage open stores.

DISCUSSION QUESTIONS: Is Stage Stores’ shift to off-price a good idea, and will the conversions likely work across its smaller markets? What concerns would you have about its off-price push?

Please practice The RetailWire Golden Rule when submitting your comments.
Braintrust
"The numbers don't lie, so it seems like a good call for Stage Stores to make this shift to an off-price model."

11 Comments on "Stage Stores converts to an off-price future"

The numbers don’t lie, so it seems like a good call for Stage Stores to make this shift to an off-price model, especially in smaller markets that may traditionally have fewer brick-and-mortar shopping options. The biggest concern would be providing something unique to its target market, likely with assortment, so Stage Stores can stand out from the pack.

The off-price market is becoming over saturated, and that should be a concern for new players like Stage Stores attempting to go in that direction. It’s possible that for the short term, Stage Stores may find success if they have a geographical advantage with stores in secondary markets facing less competition but if so, that will only be temporary as stores are continuing to open everywhere despite the number of stores that continue to close. Remember that the successful off-price stores like TJX have built their brand around the concept and have attracted a sizeable loyal following. It will be hard for any newcomer to compete and accomplish the same success.

A lot of Stage’s stores already resemble an off-price format in that they offer a messy jumble of product. However, unlike off-price, this position is not deliberate and is usually accompanied by a down-at-heel store environment. Frankly, there is no future for some of these outlets so a switch to off-price makes sense. My concern is that off-price is now a very crowded segment of the market. What is Stage doing to differentiate Gordmans from rivals? I am not sure there is a clear and compelling answer, and therein lies a problem.

Changing the format of some stores, observing results, and making changes in more similar stores is a sound approach to expansion. The caveat is that if and when changes are made to stores in markets that are not similar or with different consumers, the rollout is unpredictable because results do not transfer when stores are different. In that case, it is just continued experimentation.

Off-pricing as an alternative to discounting merchandise in flagships (like Saks Off Fifth) is a relatively new space (Nordstrom Rack also plays in this space). Considering the Stage model of staying away from promotions and dropping prices to compete with the true off-pricers, they might have a winning proposition.

The numbers so far don’t lie. With the sales growth they have had in the stores that have been converted, it looks like a winning strategy. If you look at their present retail offering in their stores, there is no real reason for anyone to want to shop in them.

This is a much better approach than just offering more of the same old stuff.

The Devil is always in the execution. Stage Stores could benefit from some operational discipline now, so switching formats doesn’t necessarily mean they will succeed in what is rapidly becoming a vastly over-stored segment. So, for me, the jury is still out … and may be on vacation.

While I worry about saturation, off-price seems like a good place for Stage Stores to move. I would caution, however, that experiences will become more important than ever as the off-price space gets more crowded. Off-price can’t also mean “bargain basement” experiences. I would recommend that Stage think carefully about how to differentiate from the dominant off-pricers like ROSS, TJ Maxx, Marshalls, etc.

I don’t imagine they felt they had a choice (and I’m hardly in a position to disagree) so it seems, if not pointless, then at least bad-form to criticize. My question is: will this be enough? The advantage of being a department store in a micro market was that you weren’t Walmart … I’m not sure seemingly becoming more like them is a winning strategy long-term.

Many Stage stores are in communities where there really is little other choice. Like Mr. Mathews said, execution will be so important. But I believe that in a lot of their communities, this could really benefit them as well as the shoppers they are serving! Without doubt, in their larger communities they face stiff competition from TJX, Ross, and possibly Macy’s Backstage, but if their execution is good and they build a good foothold, their customers may see them as a reliable and dependable destination.

Too bad none of this speculation matters anymore. Due to COVID-19, it was recently announced that all Stage affiliated stores are now being completely liquidated and all the locations are going out of business permanently! So they never had any opportunity to execute their 2020 plans to convert a substantial portion of their other stores into the off-price concept of Gordmans. Also, it was probably a bad idea that stage decided to acquire Gordmans from bankruptcy in 2017. It definitely didn’t help Stage. Having almost 800 brick and mortar locations to operate (in addition to online sales) probably stretched themselves too thin as a company. If a big box store competitor like J.C. Penney cannot handle having 800 stores (which we now know they can’t), then what hope was there for Stage to think they could make it with just as many locations? I think they were probably kidding themselves and had unrealistic aspirations that were a bit too ambitious. History keeps teaching us time and time again that there’s no such thing as being… Read more »
2
|
0
-   Share

Braintrust
"The numbers don't lie, so it seems like a good call for Stage Stores to make this shift to an off-price model."