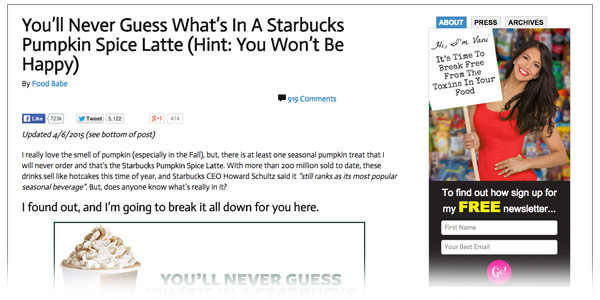 Fall has become synonymous with pumpkin spice-flavored products, but one of the most popular, Starbucks’ Pumpkin Spice Latte, has also become the most controversial.

Last year, Vani Hari, the blogger otherwise known as "Food Babe," posted a takedown of the Pumpkin Spice Latte featuring a laundry list of problems with the drink, including its lack of real pumpkin, "toxic levels of sugar," and caramel coloring, which the accompanying infographic describes as a carcinogen. Food Babe is now celebrating a victory, according to a Washington Post article, as Starbucks has changed Pumpkin Spice Latte recipe so that it now includes pumpkin puree and a more "natural" ingredient lineup.

Food Babe and her arguments are, however, controversial to say the least. Critics have accused her of scaremongering and making unscientific claims about food additives, chemicals and perceived "toxins." Science bloggers have taken her to task on a slew of stances. One blogger at ScienceBlogs, for instance, has stated that she promotes pseudoscience and ignorance, and criticizes, among other things, a portion of her recently-released book in which she makes the sweepingly unscientific claim that "there is just no acceptable level of any chemical to ingest, ever."

But the public has spoken, and Starbucks has acquiesced to consumer demand. A People blog indicates that the new Pumpkin Spice Latte has not suffered in flavor since the change to the new recipe.

This is not the first instance of food manufacturers bowing to internet-fueled public opinion on the basis of perceived, but scientifically unconfirmed, health risks.

Earlier in August, Pepsi removed the artificial sweetener aspartame from Diet Pepsi after a longstanding sales slump for the beverage. In a CNN Money article, Pepsi North America CEO Al Carey is cited as saying that the number one complaint customers had about Diet Pepsi was the inclusion of aspartame.

"Aspartame is the sweetener that seems to get most of the negatives in the press and on YouTube," Mr. Carey said in the article.

The long-embattled additive has been said to pose no threat to human health by the federal government, but a study from the 1970s associating it with cancer in lab rats continues to foment public fears.

Pepsi replaced aspartame with the more popular artificial sweetener sucralose, also known as Splenda, in the U.S., but is not changing the recipe for Diet Pepsi in other countries.

How responsive should food manufacturers and retailers be to calls for changes to ingredients, even if the concerns are dubious? Will Starbucks and Pepsi see positive press and increased sales based on the changes they have made?

Please practice The RetailWire Golden Rule when submitting your comments.
Braintrust
"Sometimes, whether it makes sense or not, food manufacturers need to change their formulas to fit consumer sentiments."

"There could be an opportunity for a food manufacturer to truly embrace transparency and support for scientifically safe ingredients."

"Well if you put yourself out there, you must anticipate some criticism—justified or not. A high sugar dose is anathema to some consumers. So are artificial anything. Have you tried to keep up with the ever-changing controversy over which type of cooking oil is healthiest?"

Sometimes, whether it makes sense or not, food manufacturers need to change their formulas to fit consumer sentiments. It’s easier to reformulate than fight public opinion, and during the fight the manufacturer will only lose sales and market share. Unfortunately, in the age of social media, fiction is often considered fact.

There will always be a debate about what is healthy or not. It’s not about that though. The market determines what it wants whether the reasons are logical or emotional, so smart manufacturers and retailers are best off doing what they can to please consumers. It seems like in the case of Subway (another Vani Hari target) and Starbucks, changing their formulations was not all that painful and (after resistance) they are able to tout that they listened to consumers and respected their wishes.

Starbucks and Pepsi can probably expect to see a short-term boost in press and sales, but the problem with these unsubstantiated fears is that they can spring up around any ingredient at any time. As you can see with aspartame — all it takes is one study to turn people off for life. And in that case of the “Food Babe” you don’t even need a study.

These fears will continue to ebb and flow but I predict that there is going to be a resurgence of scientific-minded shoppers and informed eating. There could be an opportunity for a food manufacturer to truly embrace transparency and support for scientifically safe ingredients.

I am not an expert in ingredients of food, and I’m not the one to be preaching about eating healthy. (Okay, somewhat healthy.) If the food industry made changes every time someone made a somewhat valid claim about the healthfulness of an item then there would be a lot less merchandise at the grocery story, and the fast-food/quick-serve restaurants might be out of business. Starbucks is good at listening to customers. Typically one customer’s comment does not call for a change. But that doesn’t mean that Starbucks won’t listen and take the comment into consideration. It’s when there are a number that “recommendations” are taken seriously. Not saying Starbucks has to act on any recommendation, but if a group of customers are independently making the same comment, it can’t be ignored. All that said, even one customer can make the difference. If the customer’s point is realistic and valid, it could change everything. While the example is grand and not in the food industry, when Taylor Swift wrote to Apple’s CEO about her issue with… Read more »
0
|
0
-   Share

All these businesses need to do is run it past the focus groups.

I think there is a strategic and a tactical element to this issue.

Strategically, I think food manufacturers and retailers should bias their ingredients to healthier options.

Tactically, they need to take into consideration what the market (i.e., consumers) feel about individual ingredients, and be prepared to substitute in the event that there is public outcry about any given ingredient.

In this particular case, Starbucks could have avoided the initial concerns had they used the healthier ingredients in the first place. That said, they have clearly responded well.

Disclosure: I must admit that there is a personal bias in this position as I favor nutritional value over taste. I understand that there are food purveyors that seek to optimize sales by taste alone with no apparent regard to the healthfulness of the ingredients, but that is a whole other matter.

I guess one might consider the announcement of the removal of harmful ingredients a success. I don’t, but someone will. Adding to this same announcement that the harmful ingredients were largely replaced by what consumers were led to believe were there in the first place is also short of adding credibility to the company’s offering. I am wondering if the company(s) will ultimately refuse to allow the products mentioned to be consumed on or in proximity to company property like they have done with tobacco products? After all they are in hot pursuit of what is best for the consumer.

Well if you put yourself out there, you must anticipate some criticism—justified or not. A high sugar dose is anathema to some consumers. So are artificial anything. Have you tried to keep up with the ever-changing controversy over which type of cooking oil is healthiest? It is ironic (almost amusing) that individuals with no scientific standing seem at times to define the food ingredients debate. If you’re Starbucks, too much sugar in a holiday latte is called out as a sin. If you are Ben & Jerry’s, nobody is complaining about the amount of sugar in your ice cream recipes. If you are Pepsi or Coke and you try to replace sugar with something else, you get lambasted over the potential risks of saccharine/aspartame/sucralose (pick your sweetener of the decade). For food marketers, sometimes public perception matters more than even sound science. A few canny influencers understand this innately and use it to drive their own agendas. Are they doing a public service? Yes sometimes. But they also sometimes propagate inaccuracy and fear. I shed… Read more »
0
|
0
-   Share

As long as there is some merit and the pros outweigh the cons, the manufacturers should modify ingredients that tend toward the generally accepted “healthy.”

If consumers had the power of social media earlier, maybe for instance, General Mills, Kelloggs and Post would have evolved to whole grains and less sugar much sooner. Think how long a time these cereal manufacturers (I do buy some of the healthier cereals from them and others) marketed “candy” cereals to the consumers with a mountain of sugar. They are all late adopters ot the “healthier” market spurred by consumer demand and some negative publicity.

Until a larger portion of consumers graduate from “low information, uneducated and gullible, we need people such as the “Food Babe” to spur debate.

Braintrust
"Sometimes, whether it makes sense or not, food manufacturers need to change their formulas to fit consumer sentiments."

"There could be an opportunity for a food manufacturer to truly embrace transparency and support for scientifically safe ingredients."

"Well if you put yourself out there, you must anticipate some criticism—justified or not. A high sugar dose is anathema to some consumers. So are artificial anything. Have you tried to keep up with the ever-changing controversy over which type of cooking oil is healthiest?"